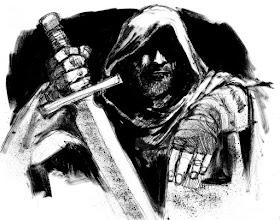 A kingdom stands on the brink of destruction, as the vast realm known as the Shadow Deep slowly swallows everything in its path. As the army fights to contain the tide of evil creatures teeming up out of the black clouds, the kingdom’s best soldiers, the rangers, must venture down into the shadows to gather information, rescue prisoners, and ambush enemy supply lines. It is a desperate fight against seemingly overwhelming odds, but every little victory brings another day of hope…

As readers of Spellcaster will know, I have been quietly working on a new game that I hope to self-publish in the next few weeks. Rangers of Shadow Deep uses some of the core Frostgrave mechanics, but takes them in a new direction. First off, Rangers of Shadow Deep is designed to be played either solo or co-operatively, with up to 4 players all taking on the roles of rangers. Also, while the game is still very much a table-top miniature game, it takes one more step in the direction of role-playing. Each player creates their own ranger, choosing from a host of different abilities, skills, and spells. While the players are called ‘rangers’, it is easy enough to create a character that looks more like a knight in shining armour or a devious spellcaster. You could even play a ranger who is more of an academic, focusing on skills, while letting your companions do the majority of the fighting. Every ranger also has companions, the number of which will vary depending on the number of players, but these too will have their own abilities and skills.

Once the players have created their rangers, they can start playing missions. Each mission is like a mini-campaign and consists of two or more scenarios. In some cases, these will be straight-forward: play scenario 1 and then scenario 2. In other cases, each scenario has an important effect on the next one. Once the players have finished up the three starter missions in the book, they will be ready to tackle, Burning Light. This is the massive 9-scenario mission that forms the last quarter of the rulebook. During this mission, the rangers will explore the ruins of a convent in the Shadow Deep. The rangers will be able to choose what order they explore the different areas of the ruins, and the order they choose could have a profound effect on how easy or hard each scenario turns out. Each area/scenario gives the rangers the opportunity to find clues as to the resting place of an ancient artifact.

Of course, as the rangers go through all of these missions they will gain experience, which will entitle them to increase their stats, abilities, skills, etc. Their companions will also progress, becoming more useful as they become hardened to the dangers of the Shadow Deep. 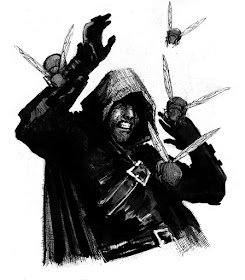 In many ways, Rangers of Shadow Deep is the next step in the development of the Frostgrave system, but, more importantly, it is a stand-alone adventure game, where players must work together to defend their kingdom against a seemingly unstoppable darkness.

I have completely finished the manuscript for Rangers of Shadow Deep, and I have all of the artwork as well. (All of it created by my friend Barrett Stanley). All of this material is currently with the designer. There will probably be a few back-and-fourths on the design, then I will give it one final editorial check, and then the game will be ready for release. I am hopeful that the game will be out in just a few weeks.

In the meantime, over the next couple of weeks, I will be showing off different parts of the game here on my blog, including creating a ranger and companions, and maybe showing off a scenario or two.

I am also hard at work on the first little supplement for the game, which will both give the players a new mission to complete, and also push the whole narrative of the game forward.

The game will originally be available as a PDF from RPGNow.com, or directly from me, with a print-on-demand version to follow at some future date. I hope I’ve got you interested!
joe5mc at 04:12
Share