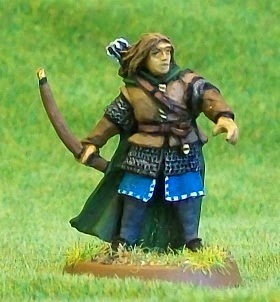 Despite the nickname given to him in Gondor, Rymond was actually born in the town of Archet some miles to the north of Bree. Orphaned at a young age, Rymond went to live with his great-uncle, a glassblower who had little interest in his nephew. As Rymond grew older, his uncle often sent him out on deliveries to many of the nearby towns. During these trips, Rymond took every chance he could to sneak off and spend a couple of hours at the Prancing Pony. Sitting by the warm fire with a cup of cider, Rymond would listen to traveller's tales and learn any foreign words that anyone would teach him.

When he was sixteen, his great-uncle died. Rymond took what little money his uncle possessed, packed a bag, and joined the first merchant caravan he could. For the next seven years, Rymond traveled with any caravan that would take him, as long as it was going somewhere new. At first, he signed on merely as hired labour, but eventually he learned enough skill with a bow to serve as a guard. Finally, his skill with languages was noticed and merchants began to seek him out to act as an interpreter in far flung corners. 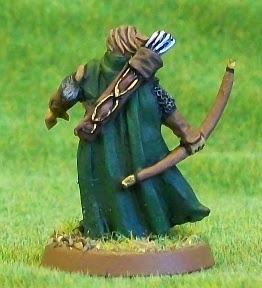 Still a young man, Rymond can now speak seven languages fluently, not counting the numerous dialects he also knows. He can even stutter through conversations in Dwarvish and at least one Elven language.

Rymond was actually in the Druadan Forest when the first announcements about the Glaurung were made, but when the news eventually reached him, he hurried to Minas Tirith determined to secure a place. By the time he reached the city, Breged and Madracoth had already departed for Dol Amroth. Taking the fastest ship he could, Rymond arrived in the city the week after Prince Althérion.

Presenting himself before Breged, the young man nearly begged to join the crew. Initially unsure of the stocky youth, Breged then learned about Rymond’s gift for languages. Such skill could prove invaluable on the quest, so Breged granted the young man a place on the Glaurung. 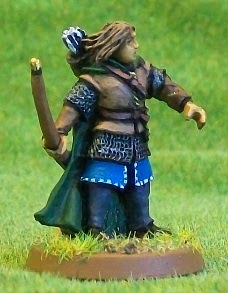 The figure of Rymond comes from the Blackroot Vale archer command pack. Originally it’s left arm was holding a horn up to its mouth. Although I thought it was a cool figure, I just couldn’t see having a hero blowing a horn through the whole campaign, especially one who was supposed to be my translator. So I once again put my (feeble) conversion skills to the test.

My first attempt to give him a new left arm failed miserably, and I ended up ripping it off and starting over. On my second attempt, I sculpted a new bit of tunic on his left shoulder. Then I cut the arm off a plastic warrior of the dead mini and glued it into place. That looked okay, except for the hand, so I cut that off as well, and replaced it with another plastic hand. I had to file the fingers down on the hand as it was a little large.

I’m mostly happy with the results. Rymond has a slightly strange pose. He looks a little bit like he has been caught off guard and is flinching away from something. The whole left shoulder is a bit crude, but generally passes a casual observation. Perhaps a bit of crudity is a small price to pay for a unique figure.

Rymond represents the tenth and last of the heroes to join the Glaurung. That said, I still have at least one figure left to paint to finish off the crew. Still, it is nearly time to set sail...