There is a rule somewhere that says a creator will never win at his own game, but I get ahead of myself...

Having just created Sancrief and his warband, I wanted to give him a try out, so I arranged a quick lunch-time game with Phil. We only had a small table to play on, but it gave us a nearly 3' x 3' board. Frostgrave can basically be played on any size table. Smaller boards mean quicker, more violent games. Larger tables give more time for manoeuvre and spell casting.

Before the game officially started, Sancrief attempted to roll for an Illusionary Soldier. The spell has a base casting number of 12, and because it is from an aligned school, it is two harder for him. So, he needed a 14 on a d20. As it is an Out-of-Game spell, he gets one shot to roll for it before the game. He rolled a 6, so no illusionary support this time. 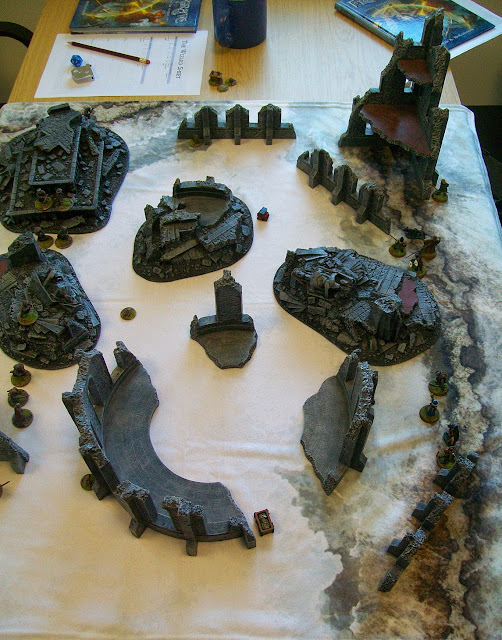 The board was set up for a standard game. Phil and I took turns placing six treasures on the board, then we diced for who would start on which side of the table. During set up, I divided my team into three groups. Sancrief, the knight, the warhound, and a thug, would advance up the centre right. His apprentice Vorana, along with the tracker, the thief, and another thug would move up the left. Finally, the lone archer would climb the tall ruins in the corner to get a good field of fire. 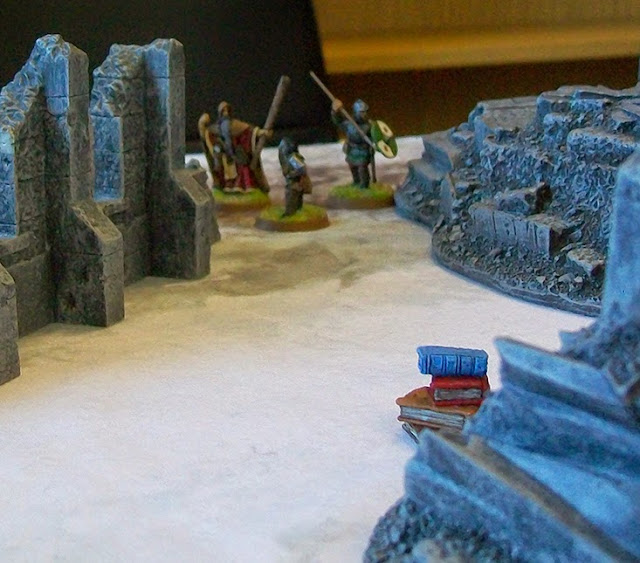 Sancrief and his men spy a pile of ancient books frozen into the ground and make a run for them. 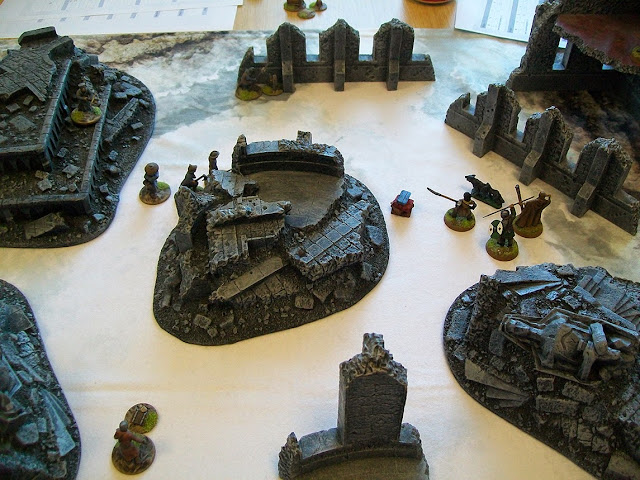 The game began quietly. We rolled for initiative, which I won. I began by moving my wizard and the three men near him. Sancrief attempted to cast a Shield spell, but failed. Lo Shen, that dastardly wizard, also advanced with his men. He cast a Summon Demon spell, and with a puff of brimstone, an imp appeared in the form of a floating ragman. 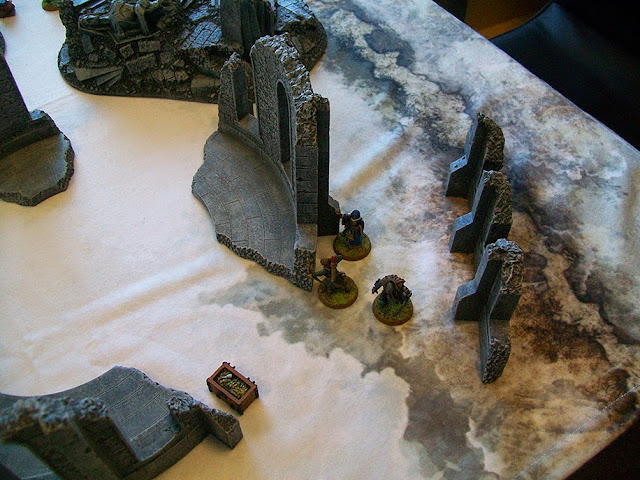 After both of our wizards had moved, it was time for the apprentices to go. Vorana left the thief to collect a pile of scrolls while she took the rest of the men towards a treasure chest. She also attempted to cast a Shield spell and failed (foreshadowing?). Phil's apprentice then activated. He lead his men creeping around the ruins hoping to ambush Sancrief. His crossbowman drew first blood, taking a shot at the knight. The crossbowman has a basic Shoot of +2. So he rolls a d20 and adds 2. In this case he rolled a 12 for a total of 14. In defence, the knight rolls and adds his fight of +4. He rolled a 3 for a total of 7. Since the crossbowman beat the knight's score, he got a hit. However, his total roll of 14 was only one higher than the knights armour of 13, so he did only a single point of damage. Taking the knight from 12 to 11 health.

With the apprentices done, all of the remaining soldiers moved. My archer climbed up to his perch, a few of Phil's guys advanced around the edges, and the imp charged straight across the field towards thief. 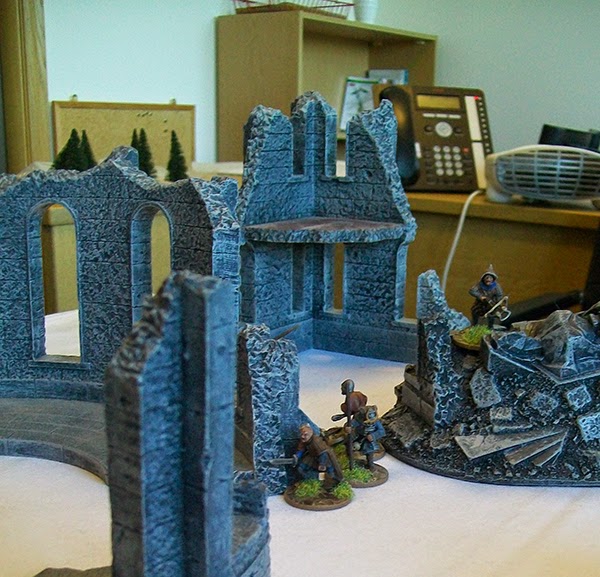 Phil won the initiative on the second turn, which turned out to be bad news for me. My archer, up in the ruins, suddenly realized that if he could see everybody, they could also see him. Lo Shen cast a bone dart spell (this actually requires two rolls, one to cast the spell, and if that works, he makes a shooting attack at +5). The bone dart found its mark, doing 8 points of damage, taking the archer down to 2 health. He did haven't to worry long about the wound, however, as a second later, a crossbow bolt slammed into him, sending him tumbling to his doom.

Loosing the archer was tough, but I wasn't worried. As the turn passed over to my wizard, Sancrief cast a Mind Control spell and took command of one of Phil's crossbowmen. Feel confident, Sancrief then sent his warhound scampering across the board to intercept the imp charging down his thief. As it turned out, this would be a major tactical blunder.

As the turn passed to Phil's apprentice, he cast a Leap spell* on the mind controlled crossbowman, which sent him hurtling over some terrain and temporarily removed him from the situation. Then he ordered all of his men to rush my wizard. While the knight bravely intercepted one, the other charged through the gap left by the absent warhound and got into combat with Sancrief. Normally, a wizard should be able to take on a thug, but the dice were on Phil's side and Sancrief was beat down. 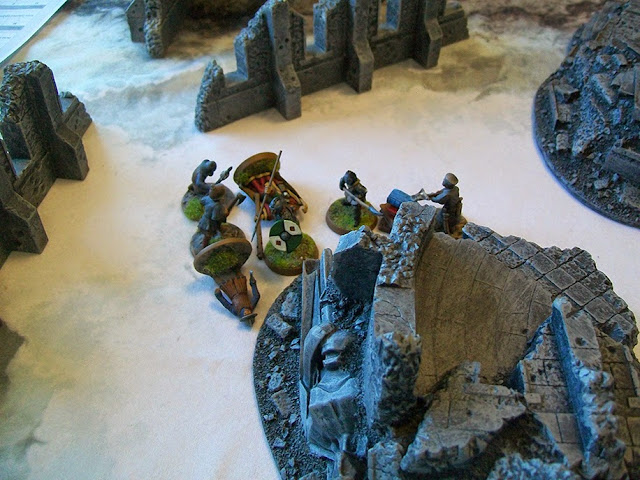 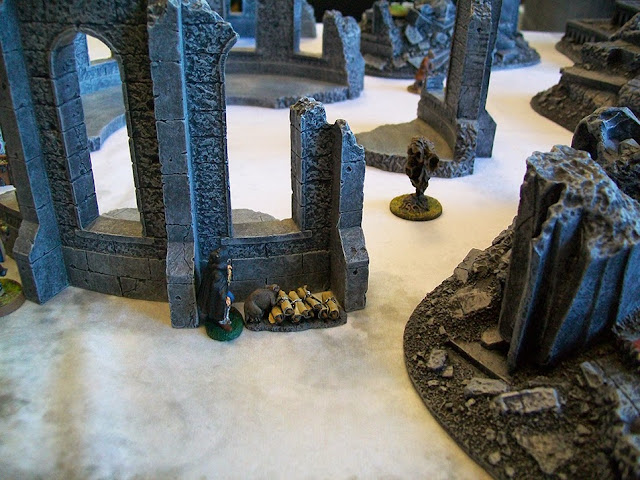 Things were a little better on the other flank. My apprentice cast Telekinesis (she actually failed the roll by two, but 'empowered' the spell by spending two of her own health to make the spell succeed). With this spell, she floated the treasure chest into the waiting arms of a thug. Then she turned around to help the thief in case the imp got passed the warhound. 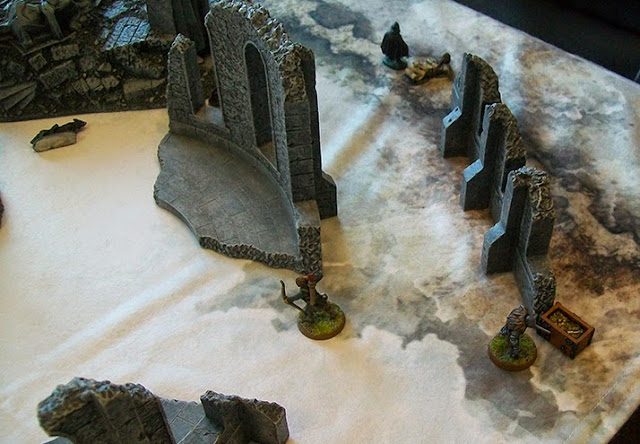 As it turned out, the imp rolled right over the warhound... 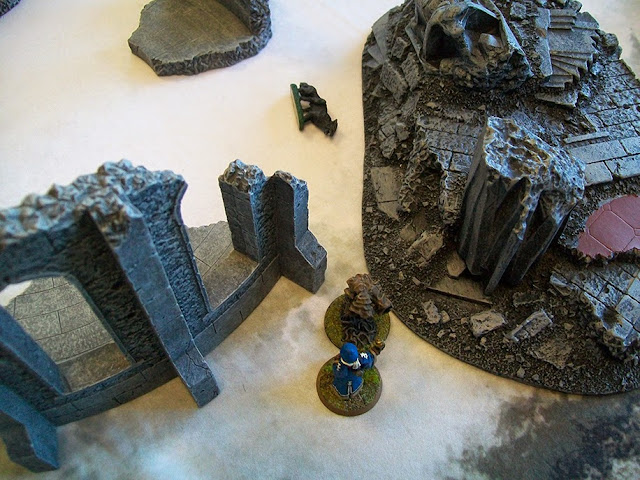 And straight into Vorana. Again, an apprentice should at least be able to hold her own against an imp for a turn or two, but it was not to be. The imp tore right through her. (Ironically, she would have survived the first round if she hadn't spent the two health casting Telekinesis.) 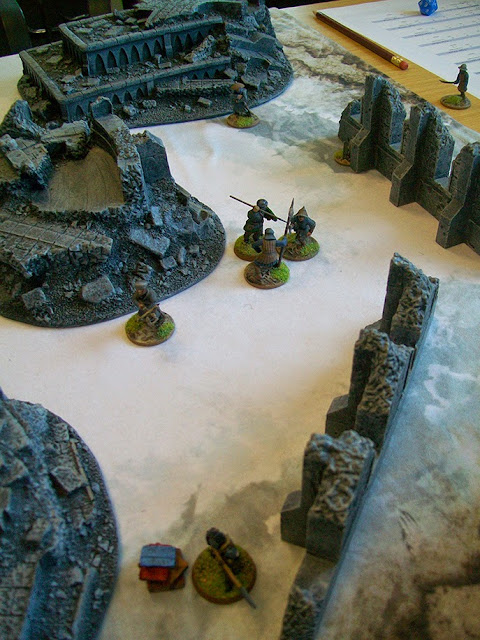 Having lost my wizard and apprentice, the rest of my gang decided to make a run for it with whatever treasure they could manage. Vorana's sacrifice had at least allowed the thief to escape with one treasure. 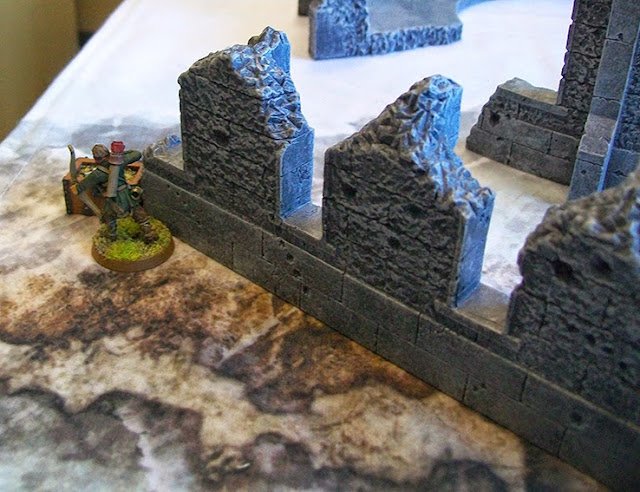 The thug, who had the treasure chest, was gunned down by another crossbow bolt, while my tracker exchanged ineffectual bow shots with an enemy ranger. I got a little smile when Lo Shen tried to cast a bone dart at the tracker, but failed so badly that he actually did a point of damage to himself). 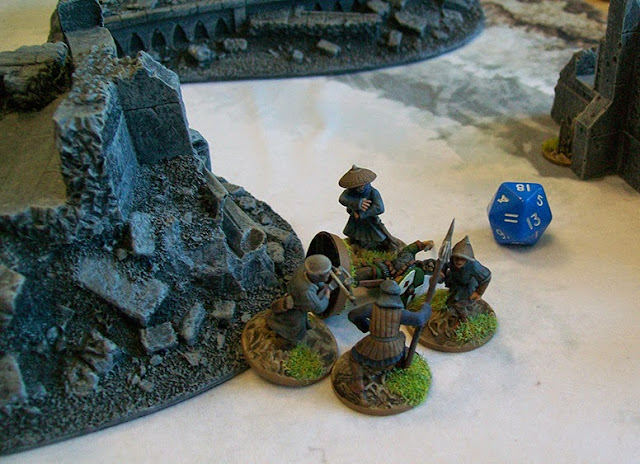 The knight couldn't run. He was pinned down by the apprentice, a crossbowman and a couple of thugs. He fought valiantly for a couple of turns, killing one and wounding another, but in the end, sheer weight of numbers dragged him down. 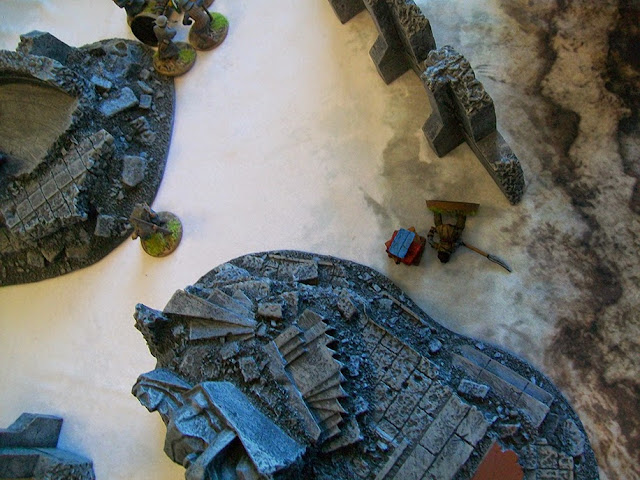 Meanwhile, my thug who was attempting to escape with the pile of books, was gunned down by a Bone Dart from Lo Shen. 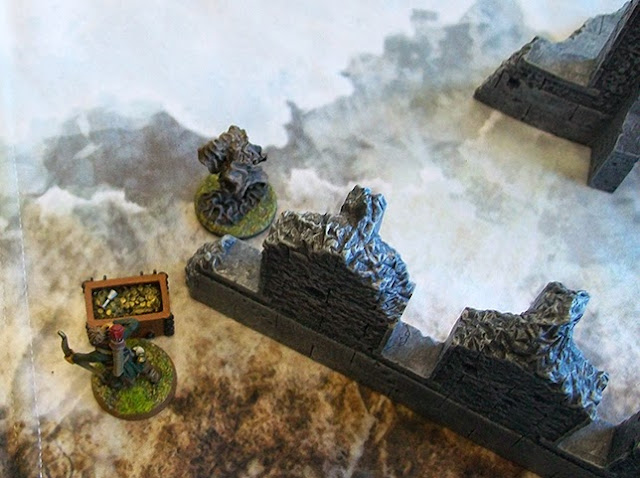 My only minor victory came when my tracker managed to get off the board with the treasure chest, just before the blood-crazed imp could catch him. 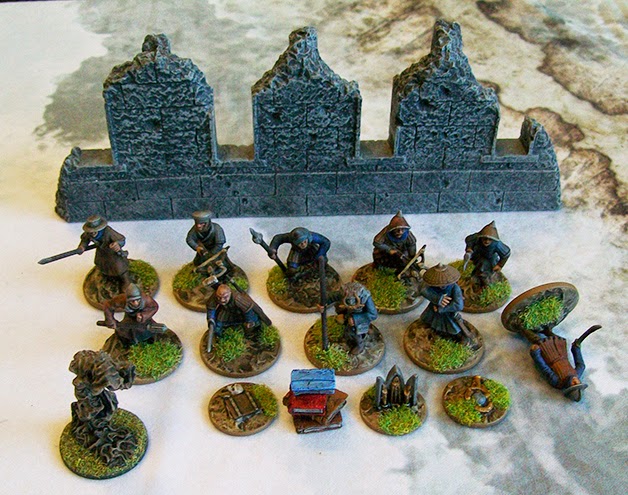 So, all and all, a pretty terrible start to the adventuring career of Sancrief. His warband did make it off with a pair of treasures, but those were the only two figures who made it off the board! On the other side, only a single casualty had been inflicted, the thug taken down by the knight.

In the post game, I rolled for each of the casualties. Thankfully, Sancrief and Vorana both escaped with only minor wounds. In worse news, the knight was badly wounded and would have to miss the next game, while the two thugs were dead (the former actually hurts worse than the latter).

Sancrief picked up 120 Experience (20 for casting spells, 100 for the two treasures recovered), so he gained one level and had 20 experience left over. He used the level to increase his Fight score by 1, so hopefully he'll hold his own a little better next time.

When they finally got a chance to look at their loot, the surviving members of the warband discovered that they had found 70gc, three magic scrolls, and a magic dagger that does plus one damage. The gold will replace the thugs with a little left over. The dagger was given to the thief as that's his weapon of choice. The three scrolls turned out to contain the spells: Curse, Raise Zombie, and Banish.

Man... that Banish scroll would have been great to get rid of that stupid imp. Sancrief decided to keep the Raise Zombie and Banish scrolls, but sold the Curse to get a bit of much needed cash...

* We later realized we played the Leap spell wrong as the player controlling the model (me) should have decided where he moved and not the casting wizard. He should have used a spell like Push or Transpose to achieve a similar effect. Still, it made for a great moment in the game, so no regrets.
Posted by joe5mc at 06:47