The Frostgrave Immersion Tour (Part 3 of 3)

When I first set-off on my journey to Estonia, I admit, I was a tad apprehensive. Although I knew a couple of the guys that would be going, most of the tour participants were strangers. What if I didn’t like them? What if felt trapped with them for a full week?

Well, not only did this fear never materialize, but actually, the exact opposite occurred. The group was amazing. Brought together by our shared passion for a wargame, and a gnawing sense of adventure, we quickly became just one big gaming group. Despite the fact we had people from England, Canada, the U.S.A., Australia, Germany, and Japan, friendships were quickly formed, stories were shared, and we laughed a lot!

Perhaps no event promoted more laughing that when Mizuho’s wizard managed to roll three consecutive natural 20s in hand-to-hand combat, single-handedly trashing poor Jon’s warband…  Mizuho said he wanted to play more ‘aggressive’ than he normally did, and he certainly did that night!

Now, where were we? Oh yes, Rakvere! After a night spent gaming in a classy spa, and sleeping on seriously soft and comfortable beds, we got back on the bus for another adventure. The temperature had dropped again, and a fresh blanket of snow covered the ground.

We cruised down the Estonian highways for a while, stopping at a small roadside café at one point – they had no idea what had hit them! Then we took another short hop on the bus, until we saw the high wooden walls of our destination: the Viking village!

After a quick tour through the crunching snow, we got down to the serious business of the day. It began with axe-throwing (I was bad), spear throwing (I was really, really bad), and archery (I did alright).  After everyone had a few goes at all of that – and proved that spear throwing especially takes a lot of practice – they wheeled out the catapult! Well, sort of a small, man-powered trebuchet really. In teams of two, we then got to bombard the fort. Well, some of us did – one team managed to launch their ammunition almost straight up in the air, sending us all scampering. Okay, the ammunition was mainly just a big ball of duct tape, but still, it was great fun! 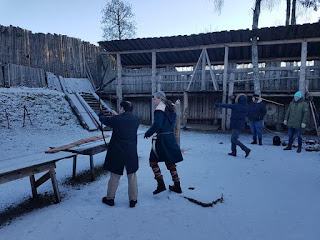 Despite the fun, by this point, everyone’s fingers and toes were starting to numb, so we retreated inside. There, while we ate traditional Estonia fare (more sausages!) while we listed to an in-depth talk about Viking weaponry.

Stuffed and educated, we embarked on our bus, and headed back to Tallinn. There, after a rest, we were back in the atmospheric confines of the Old Hansa for another feast, and another night of gaming in that great medieval house.

The next day was the last, full day of the tour. Again we assembled in the hotel lobby for another tour of the city. This time when climbed to the upper old town, crowned by an incredible cathedral, the Estonian parliament building, and more medieval walls and battlements. We went to several glorious viewpoints that looked back across the city and out to the sea. We also went down into the old tunnels beneath the city. Although we got a lot of history of this from the audio guide – I’m still not quite sure why these tunnels were made – but they were filled with interesting stuff.  That said, the main amusement of the day for most was seeing if I could walk under the increasingly smaller doorways without ducking! (As it turns out, there was only one that even I had to duck through.)

When the morning tour was done, a lunch at pub consumed, we were free to go our various ways until dinner. Five of us decided to spend the time gaming. Since there were five, me and John teamed up – he took his wizard, a I took my apprentice. It was a hilariously fun game… and my last of the tour. Although everyone gathered that evening for another game (after a dinner which featured a sword fight), I decided to sit that one out so that I could float around and talk to everyone. 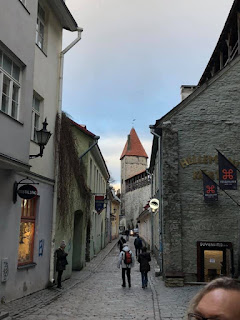 I am a man prone to sentimentality, at least concerning people and places, and already I could feel the end approaching. I had come to the tour apprehensive, and now I was seriously regretting its end. Eventually though, all the games finished, the terrain was packed away, and everyone retreated to their rooms.

The next day was filled with quiet (and not so quiet goodbyes). The only event of note was when I sat on my plane, ready to fly home. We actually sat near the runway for over an hour while the pilots tried to get the plane's computer to work. Eventually, they turned the whole plane off and on again – and – as it seemingly does for everything else, that sorted the problem.

There is no doubt my Estonian adventure with Geek Nation Tours was an incredible experience and one that I will remember for a long time to come. I think, and hope, that it will not be my last!