A Game at Cerebral Hobbies 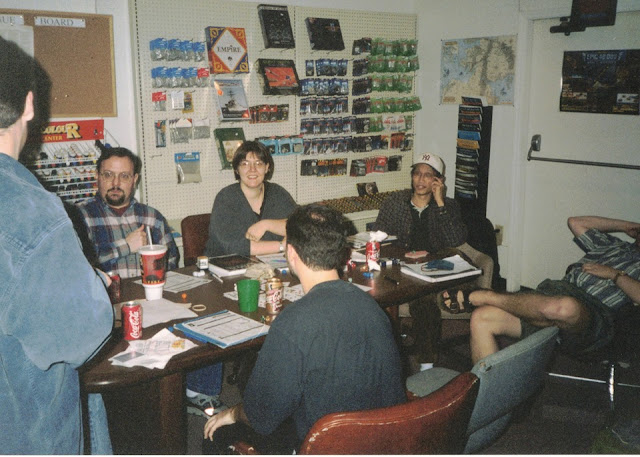 As far as I know, this is the only photograph of me playing a game at the legendary gaming store, Cerebral Hobbies in Chapel Hill, N.C. It’s incredible really. For four-and-a-half years, I spent more time in Cerebral than I spent anywhere else. It was my home-away-from home. My haven. It kept me in university, and provided an incredible gaming-education that continues to feed right into the creative work I am doing today.

I’ve got a lot more to say about Cerebral Hobbies, but I will do that elsewhere.

I’m pretty sure this photo dates to either 1998 or 1999. It is certainly towards the end of my time in Chapel Hill. That’s me, in the black, with my back to the camera. Apparently, I was already losing my hair even back then. The other people in the photo form left to right are Chris, George, Stacey, Al, and Doug (recognizable by his sandals if nothing else). The photo was taken by Matt, who I suspect was sitting in the chair next to me.

I’m pretty sure we are playing Call of Cthulhu as that looks like the book in front of Stacey and the style of character sheet in front of me looks right. Though it doesn’t explain what the decks of cards are for.

This shot shows one corner of the store and visible in the background is a map of the Warhammer Old World, a large selection of books and models for Silent Death, Heavy Gear, and Babylon 5 Wars. Also visible are a bunch of Reaper Miniatures and even a few Battletech ones, a game I never remember being played in the store.

There are so many memories brought back this photo. A huge thanks to Matt for taking it and sharing it with me 20+ years later. Also, a huge thanks to Steve for creating this gamer-haven and for his kindness for many years.