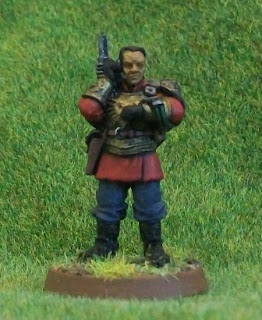 I believe this was the last figure I painted before my recent miniature clear-out.  It’s a great little figure that comes from Games Workshop's, Imperial Advisers pack. Despite containing three, really nice miniatures, this pack was never put into general release by Games Workshop, and was only available by mail order. This actually kept me from buying the pack for a long time. I did eventually, however, and I'm really glad that I did.

I painted him up so that he would slot right into my Black Moab, Inquisitorial forces with his red tunic. The lighting seems to have thrown the colours off just a tad in the photograph, as his trousers are grey, and not nearly so blue as they seem here.

One thing I really like about the figure is the kind of throw-back look of his breast plate. It is very reminiscent of the old Imperial Guard officers from the 80s. I went with a pale bronze for this as I thought it fit nicely with the red.


He should find lots of work with the forces of the Black Moab, as every detachment needs a radio man. I’m very pleased with this figure and even more mystified as why GW made him harder to obtain than usual. 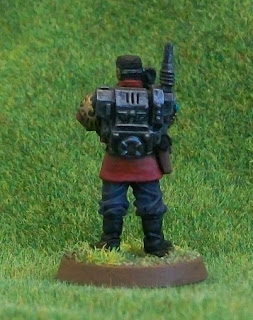