I love the circular nature of creativity. For example, I wrote a game called The Silver Bayonet that was recently released. It's a game Napoleonic gothic horror. In the book there is a cool black and white drawing of a crypt. In the latest issue of Miniature Wargames (Issue 464), there is an article by Tony Harwood in which he scratch-builds a crypt based on the drawing. It's a beautiful little scenery piece, well beyond my own abilities. Which isn't surprising since Tony is the author of Wargames Terrain and Buildings: The Napoleonic Wars. Still, I found that piece so inspirational, I wanted to try and do something similar, and to test out Mr. Harwood's advice for using egg boxes to get a stone like texture. So, I built my own little 'Dread Shrine', and I'm rather pleased with the results. Now, I'm thinking of possible scenarios I can write to use it! And around it goes!

I built this little shrine in just a couple of sessions, probably 3/4 hours total. The basic structure is foam board with bits of egg box glued onto it. The base is a wooden MDF circle I had laying around. I made a little mound of greenstuff in the middle of the base, and pushed in a bunch of GW skulls. Another GW skull adorns the front. Painting is mostly a bunch of grey dry-brushing and a green wash. I painted on some extra 'arcane symbols' to give it an even more sinister appearance. There is also a pentagram painted on the inside back wall, but it's hard to see unless you get really close. Finally, I decided to liberally apply lichen and flocking, because I wanted it to look like it had been mostly abandoned, deep in the woods.

It was a fun little build and reminded me, that no matter how nice and beautiful pre-built terrain is, I'll never love it in quite the same way as something I make myself from scratch. 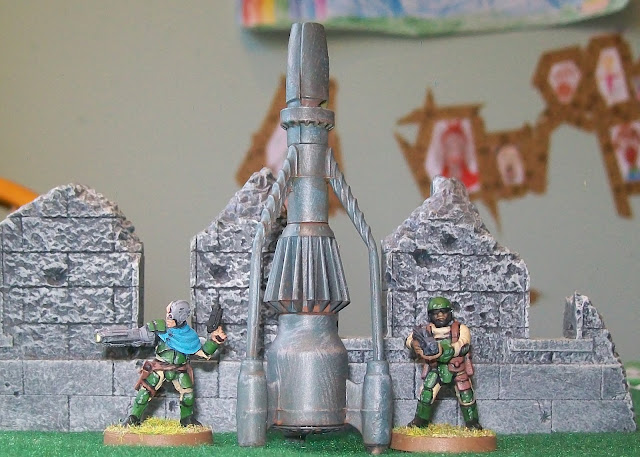 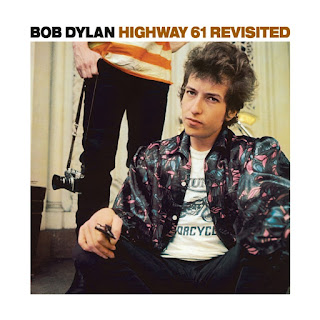 Robert Louis Stevenson and J.R.R. Tolkien taught me to love stories. H.P. Lovecraft and Robert E. Howard made me want to write my own. But it was Bob Dylan that taught me the joy of playing with words.

My parents were both Bob Dylan fans, so I was exposed from an early age, but I never paid him any special attention until I was fourteen. That’s when I discovered his album, Highway 61 Revisited and particularly the song, Desolation Row.

Desolation Row is a peculiar piece. It’s eleven minutes long, has no refrain beyond the words ‘Desolation Row’, and basically makes no sense. A riot of literary and historical allusions fill the verses, woven into a rambling dystopian vision. After thirty years of listening to the song, I’m not sure if most people are trying to escape from or escape to Desolation Row.

I think the only way to explain why I love this song is to explain the effect it had on me. Up to that point in my life, I had always loved stories, and I was on the cusp of discovering the writers who would make me want to tell my own stories, but I didn’t really have any particular love of language itself. Then this song came along, and it opened up a door in my mind. I started carrying a notebook around school, and while I was supposed to be learning physics or math, I was instead creating new verses for Desolation Row.

Truly, it is a song that invites you to keep going after Dylan has finished singing. The verses have a  simple poetic structure that is easy to replicate, while Dylan’s lyrics cascade about, saying ‘anything goes as long as it makes sense to you’. As I played around with my own verses, I found a joy in the English language I had not known before. Suddenly, it was important whether I used ‘this’ word or ‘that’ word. It became important how two words interacted together, and how that might change the meaning of either or both.

Of course, I soon discovered that Desolation Row is no fluke. This strange magic of word play saturates Dylan's career. When he wants, he can use it to tell a coherent story, such as in Hurricane, but my favourites have always been the semi-coherent, allusion-filled works such as Dignity and the incomplete She’s Your Lover Now. These songs carry me away to a place where words have a psychic force.

I know many people were bemused and befuddled when Bob Dylan won the Noble Prize for Literature in 2016, but personally I thought it was long overdue. Just to drive home the point, Dylan would (eventually) accept the award and deliver a speech that could only be understood by people who already understood why he’d been given the award.

So, while my other literary heroes are all authors who told fantastical tales, it has always been Dylan, more than any other, who taught me the pure joy of choosing words. 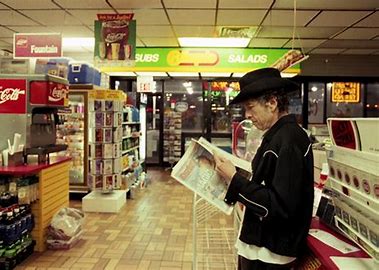 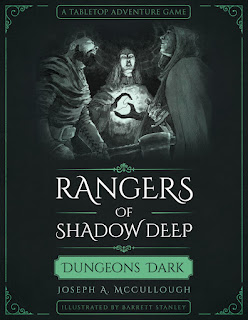 Rangers of Shadow Deep: Dungeons Dark is available in both PDF and print-on-demand! This is the long-awaited, second chapter of the 'The Rescue' mission that began in Across the Wastes. So, if you haven't played that one, you'll want to pick it up first.

This supplement is also the first time I've written a true dungeon-crawl for Rangers. In this one, the rangers will have to sneak/fight/explore through 4 levels of rooms and corridors, never knowing exactly what will be behind each door.  You will need to create a dungeon layout for each level, but there is some guidance in the book for simple ways to do that if you aren't an avid dungeon modeller.

Along with the scenarios, the book also contains a section on Shadow Magic, the evil magic employed by the sorcerers of the Shadow Deep. Rangers can potentially use this magic, but it comes with risks!

Because of the format, it proved to be a much longer, and much more involved book that I expected when I started. Hopefully players will consider it worth the effort! 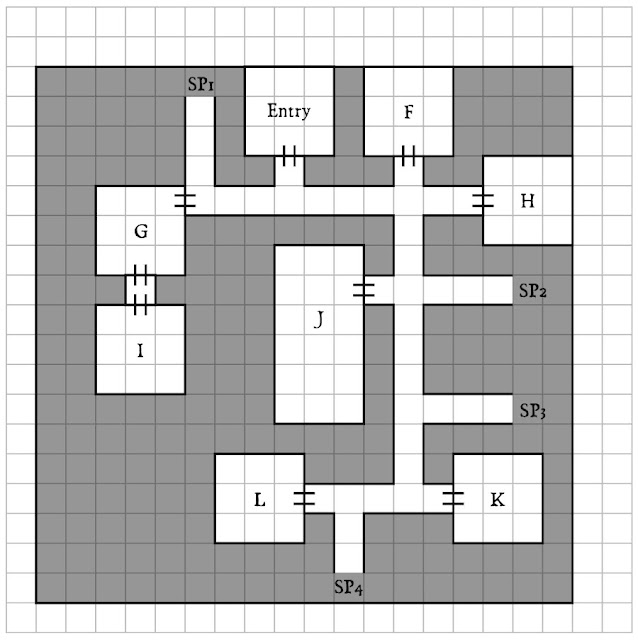 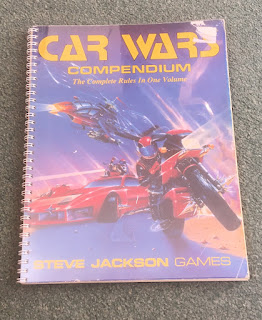 Lately, I have been revisiting some of the great games of my youth. The games that were alive and kicking in the late 1980s and 1990s. While my love for this era of gaming is primarily driven by nostalgia, there are a couple of specific aspects to the games that I love. Frist-and-foremost, is the ‘do it yourself’ attitude that most of them took. These games generally accepted that they weren’t perfect, or complete, and that players were expected to modify them, house-rule them, and add to them. This worked hand-in-hand with another aspect I really enjoyed – they were truly pencil and paper games. You were constantly writing things down, ticking things off, or just doodling in the margins as you played. I honestly believe this helps drive player creativity. Finally, I think the thing that attracts me most to many of the games of the era is that they were part of a grand exploration of what gaming could be. Now days, we tend to try and rigidly define games as a ‘board game’ or ‘war game’ or ‘role-playing game’, but those were often not-at-all clear cut back in those days.


Take for example, one of my all-time favourites, Car Wars, from Steve Jackson Games. At its heart, Car Wars is an extremely crunchy, technical game, where you literally keep track of every shot you fire. You can spend hours with the book in hand, constructing your perfect death-machine, choosing its engine, weapons, tires, chassis, and what armour goes where. You can spend hours playing a game that lasts less than 30 seconds of 'game time'. And, frankly, none of those hours would probably be ill-spent. But at the same time, many people took a very role-playing approach to the game. There are rules for making characters and giving them skills for use both inside and outside of the car, and improving those skills over the course of a campaign. There is a huge amount of documentation on the world in which the games takes place, and different aspects that can be explored. The magazines at the time included numerous, narratively-driven scenarios. There were even a couple of solo adventures you could play.

As part of my exploration, I picked up a copy of the Car Wars Compendium, which contained most of the rules that were produced for the first incarnation of the game. Unfortunately, the only copy I could obtain was falling apart. At first, I was a bit down about this, but then I viewed it as an opportunity. I took it down to my local art shop and got them to wire-bind it, with a clear protective cover. Not only does the book look fantastic like this, but it’s actually much, much easier to use, as I can leave it open flat on the table, or even folded it over completely to photocopy pages. 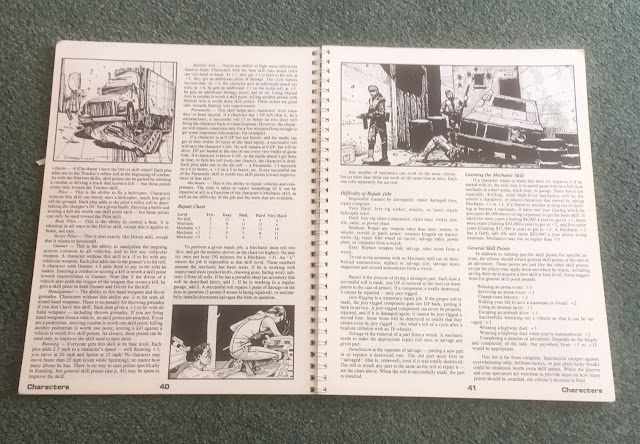 The biggest issue with wire binding is the awkwardness of storing it on a shelf. Thankfully, the book will live inside my Car Wars Deluxe Edition box, so that’s not an issue.

Anyway, I plan on digging a lot deeper into the game over the coming months. 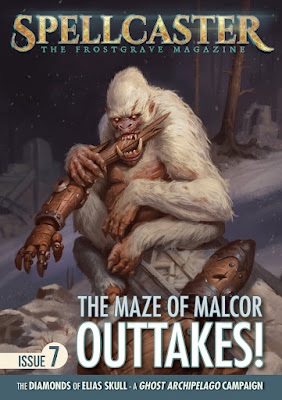 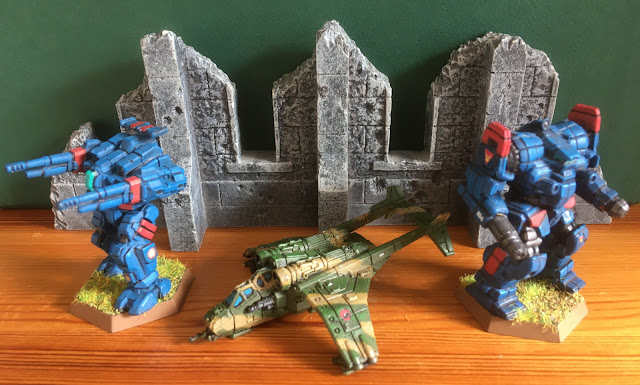 A pair of mechs from the Firehawks Legion provide ground security for a medium infantry transport.

The mechs I have shown before. The aircraft is an Aeronautica Imperials model. I have little interest in the game, but the models are fantastic and, while they are technically (8-10mm) they scale pretty well with my 6mm Battletech. I gave this one a generic 'military' paint job so that I could use it with any force. (And also so I could paint it quickly!) I suspect it'll mainly be an objective, but I suppose I could also use it for infantry assaults. Three more came in the box!