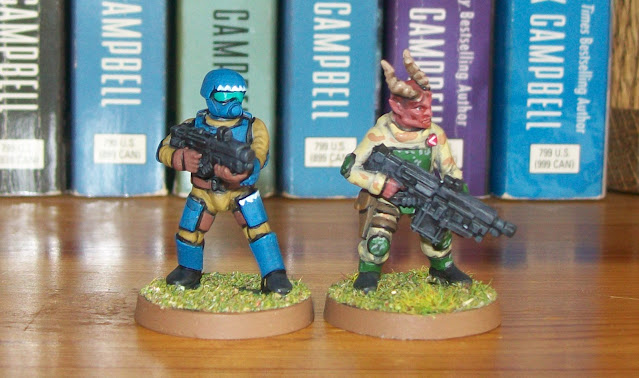 I’m still having fun with the new Stargrave plastics. Here’s the latest couple of figures I’ve completed. First up, I’ve added some firepower to my colonial marines with a squad support weapon. I used a head from the Frostgrave Demons box on this guy to go with a body from the Stargrave Mercenaries and the arms from the Stargrave Troopers. It’s nice to get a little more species-diversity into my squad!

The second figure is a straight-build form the Troopers box. I want to paint up a handful of these guys to use as pirates or other generic-bad guys. I went with blue armour because it contrasts nicely with pretty much all the other science-fiction troops I have. I love the uncomplicated look of this trooper, but thought it needed just a bit more detail to provide visual interest, so I painted some teeth on his helmet and left thigh-guard. Also makes him look just a bit tougher.

In other news, I have scheduled my first game of Frostgrave in over a year! Lockdowns have obviously made wargaming with friends extremely difficult here in southern England, but life is opening-up again. This will actually mark the first time I’ve ever played Second Edition purely for fun. It’s still a few weeks off, but I’ll hopefully have some photos to share afterwards.

New for Rangers of Shadow Deep! 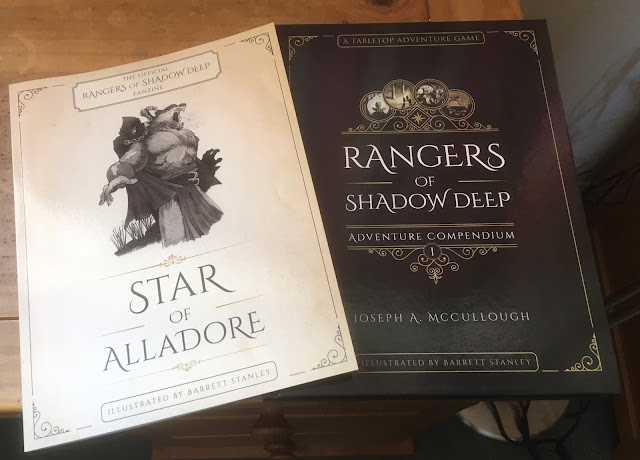 Two exciting releases for Rangers of Shadow Deep today! First up is Adventure Compendium I. This book collects the first four expansions for the game (Blood Moon, Temple of Madness, Ghost Stone, & Incinerator) into one book available in print-on-demand in both hardback and paperback. Note, this book has no new material, it’s just for collectors who want it all in a nice format.

Next up is Star of Alladore – the official Rangers of Shadow Deep Fanzine! For this book, I served as editor while inviting 5 Shadow Deep fans to contribute their own pieces. In these pages are scenarios where Rangers must quell a revolt in the heart of the capital of Alladore, investigate a hamlet stuck down with plague, explore the dungeons beneath an abandoned tower, sneak into a gnoll occupied village, and defend a group of refugees as they flee the frontlines of the war. It also includes my short piece on Aventine’s sword. Featuring Barrett Stanley’s usual dark and moody artwork, it tells a lot of stories of the war that I’d never have time to cover or would have never thought of in the first place!

For those wandering about part two of The Rescue, Dungeons Dark – I have finished writing it, Barrett has nearly finished the artwork, and I hope to be sending it to design soon. That still leaves a lot of work to do, but hopefully it should appear before the summer is out! 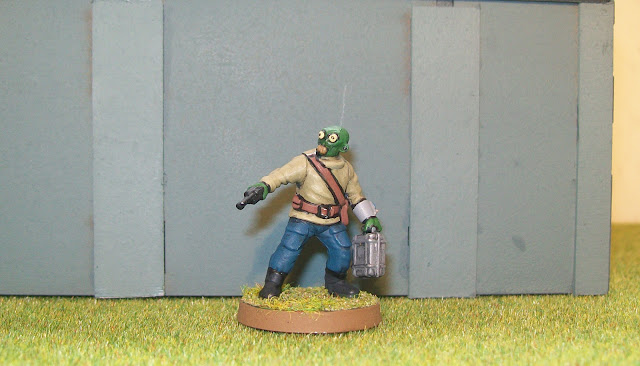 I believe my first encounter with science-fiction literature was Andre Norton’s The Last Planet (sometimes entitled Star Rangers). My parents read the book to me when I was quite young. I say ‘parents’ because I can’t actually remember which parent. Mom was the big Andre Norton fan, but Dad did more of the reading… In fact, it may be that both read it to me at different times. 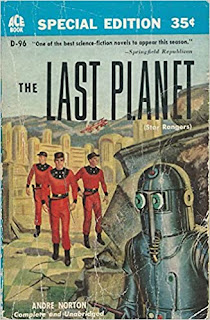 I can’t say whether or not it is a great book, but I certainly loved it at the time. It features a small team that crash lands on a remote world. I don’t remember much about the plot, but I do remember the ‘team’ consisted of a human, a bird-man, a reptile-man, and a human with large eyes adapted to low-light who had to wear large goggles in normal sunlight. I also remember that the non-humans were called ‘Bemmies’, short for ‘Bug-Eyed Monsters’. Not overly PC, but certainly believable. Amusingly, the cover features 3 humans and a robot!)


I hadn’t thought about the book in years, until it popped back into my head while I was working on Stargrave. It popped in there again as I was painting my most recent miniature (above).

This is completely a ‘for fun’ figure. I have no specific purpose for him, but I can see him getting use in all kinds of scenarios. He could be a medic, or the guy carrying the case full of money, or maybe just the Ravaged Galaxy’s equivalent of a travelling shower-curtain ring salesman. Who knows.

Anyway, he was fun to put together and even more fun to paint! 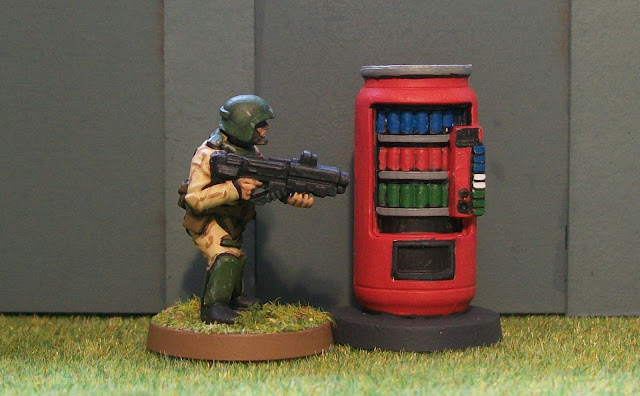 Even colonial marines get thirsty! These are the last two miniatures I have completed. The one on the left is the second of the colonial marines I'm assembling from the Stargrave plastic box sets. The other is a soda machine from Reaper miniature's Bones line.

I love little pieces like the soda machine. I mean, it can either be some kind of special loot token or objective in a Stargrave game, or it can just be a bit of scatter terrain. 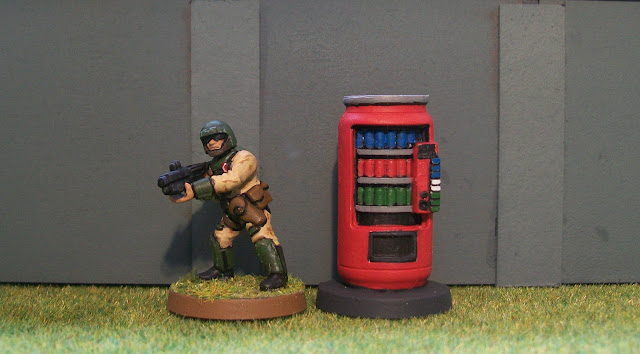