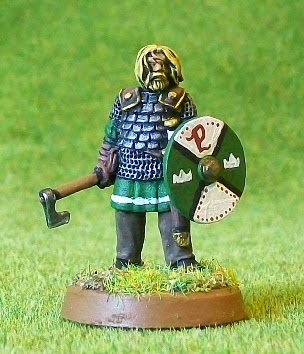 People often ask how long it takes me to paint a miniature.  Accepting that it varies wildly based on the amount of detail on the mini and exactly how much effort I decide to put into it, I would estimate that it takes me about two hours per miniatures. Most of the Rohan miniatures I have painted lately have taken me about that long, although a good chunk of that time is taken up by the shields.

My new Captain of Rohan took just a little bit over two hours. I know that because it is a rare example these days of a miniature that I painted from start to completion in one sitting. This fantastic miniature comes from Musketeer Miniatures Roman-British/King Arthur line...

(Blog interrupted by massive baby vomit. All cleaned up now) 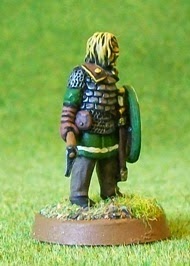 I knew when I started painting this miniature that he would serve as a captain for my Rohirrim foot forces. There is just something noble and heroic about him. To that end, I decided to make his shield design more complex than most. I figure he is distantly related to the royal line, which gives him the right to carry the sign of the crown on his shield. The character on the top of the shield is his personal mark. It is just a squiggle I made up, but seems to fit well enough. It all looks a little rough when seen close up in a photograph, but smooths out when viewed at tabletop distance.

Peter Capaldi as Doctor Who

Doctor Who returned to television last night with Peter Capaldi driving the Tardis as the twelfth incarnation of the rogue Time Lord. Here are my thoughts – 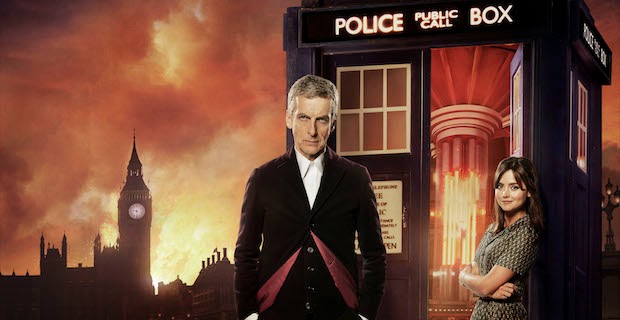 ·         While Peter Capaldi turned in a good performance in his first episode, the writers and producers have made it very tough on him. By attempting to keep this new Doctor ‘mysterious’ they have made him hard to get a handle on, and, dare I say it, hard to like. In fact, he was so in danger of becoming unlikable, that they basically had to bring back Matt Smith at the end of the episode to ask the audience to please give this new Doctor a chance! By comparison, Peter Capaldi’s Doctor reminded me most strongly of Colin Baker’s Doctor, and that is not a good thing. Remember, the Doctor has to remain a hero that kids can enjoy and look up to.
·         The plot of the episode was a mess. It is basically a loose collection of set pieces that had more imagination than coherence.
·         I absolutely hate the characters of Vastra and Jenny. If the producers are trying to make a political point by shouting about their ‘marriage’ in every episode in which they appear, they could at least present the audience with a healthy relationship, instead of the Silurian-dominated, slightly abusive one that is always shown. Regardless of one’s view on inter-species, same-sex marriage, these overly sexualized characters have no place in a family show.
·         The episode did have some good moments. The part where the Doctor and Clara were under the restaurant with all of the androids was terrifically creepy, as was the bad-guy with his spinning mechanical brain.
·         The evil cyborg’s escape plan was the same as that of the Wizard of Oz?
·         I’m not sure I care for the new intro. The music especially was grating. It needs some work.
·         I did like the new Tardis interior, at least what little we saw of it.
·         I’m looking forward to the next episode where we get the Doctor off earth, fighting the Daleks, in what will hopefully be a more straightforward adventure that gives this new Doctor a chance to shine
Posted by joe5mc at 01:34 3 comments:

Doctor Who: Engines of War (A Review) 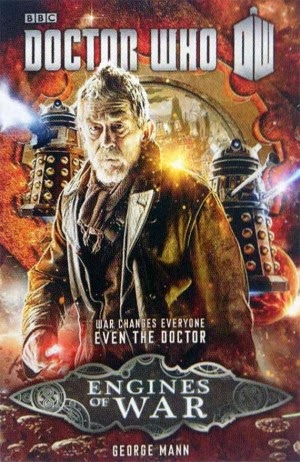 As a lifelong Doctor Who fan, I am pretty much a sucker for special events. Thus, when BBC Books released Engines of War, the first book to feature The War Doctor, I was one of the first in line to get a copy. Of course, it then took me several weeks to find the time to read it, even though it is a relatively short novel. (It’s over 300 pages, but both the font and margins are suspiciously large.)

For those who are not up-to-date on their Doctor Who, The War Doctor was the incarnation of the Doctor, between the eighth and ninth, that fought in the Time War. He isn’t counted in the traditional sequence of ‘The Doctor’, because...we’ll, you would have to watch the show for it to really make sense (and even then, not everyone agrees that it does).

As for Engines of War, I have to admit, I was a little bit disappointed. Although the writing was fine, the overall plot just isn’t that interesting.  Considering the imaginative possibilities of a ‘Time War’, the back and forth between the Daleks and Time Lords in the book is pretty conventional. Actually, this is an argument my sister made against the one depiction of the Time War in the television series, so I suppose the book is just following true to form. Still, I was hoping for more.

The flat plot is made more noticeable by the somewhat flat character of The War Doctor himself. In the author’s defence, he doesn’t have a lot to work with, trying to write a novel about a character that only appeared in one episode. However, instead of presenting what should be a unique Doctor, we actually get a Doctor that is depressingly generic. Except for a bit of facial hair, anger and world (universe?) weariness, there is nothing to set this Doctor apart from his better-defined incarnations.

Thinking about it further, this book suffers a good bit from the ‘Problem of Prequels’ which I ranted about in an earlierblog. Since the book is set before the episode in which The War Doctor appears, the reader knows more or less where the story has to end up. This also makes the one, possibly emotional, element of the story rather predicable.

This is probably somewhat harsher criticism than the book deserves. It is, after all, a book based on a television show that has to work within strict guidelines. It is well-written, and it’s not a terrible adventure. It is also probably aimed at readers somewhat younger than myself, and perhaps many of them have found the book thoroughly enjoyable.

I was hoping for more.

As for the pledge this month, that’s one book bought, one book read.
Posted by joe5mc at 12:23 1 comment:

Archers of Rohan (The Painting) 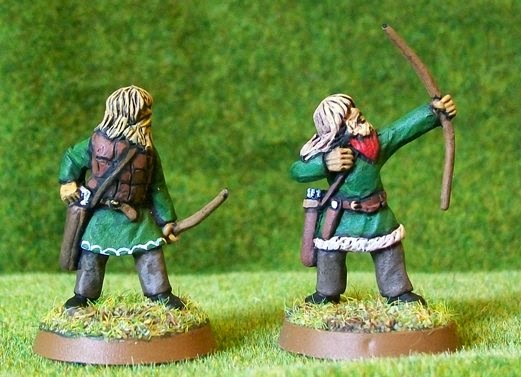 I finished painting these guys a couple of weeks ago, but, with my parents visiting from the States, a wedding, and all of the various baby-related business, they have remained tucked away in my Troll Cave.

These are the two archers I converted from Musketeer Miniatures Goths. Both gained beards and longer hair. One also gained a leather breastplate, while the other got some fur trim on his tunic.

When I came to paint the figures, I realized I had badly overdone the beard on the archer with the fur trim. These are Rohirrim after all, not wild Dunlendings. Since re-sculpting the beard would have been a major operation, I decided to cheat and paint the bottom part of the beard as though it were a scarf. The result was a partial success. I’m not sure it stands up to careful scrutiny, but I don’t think it will be noticed on the tabletop in the midst of a battle. 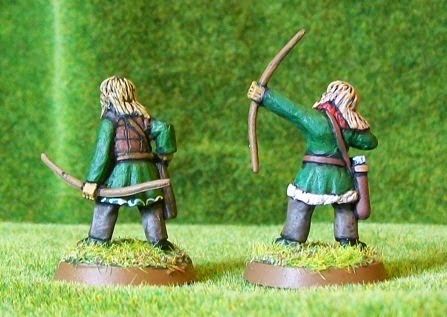 I’m actually much happier with the leather-armoured archer. Although the armour still looks a bit  rough, I think a bit of roughness is worth it for a unique figure. While I'm still not that comfortable with freehand painting, the tunics on these figures contain so much flat space that some detail needs to be added. On this one, I painted a simple row of arches running along the bottom of the tunic. Arches for archers!

Taken together, I’m pleased with the first archers to join my slowly growing Rohirrim ranks.

With my most recent cycle to work, I passed another milestone on my road to 10,000 miles. When I originally set my cycling goal over five years ago, I had hoped to have reached it by now. However, I didn’t factor in the crashes and broken limbs that ended up costing me 8-10 months of cycling time.

Since I have returned to work after the birth of my daughter, I have been cycling as much as my body can take. The weather has been excellent around Oxford, and I wanted to take advantage of it. Occasionally, I have pushed it a bit too hard, and all the cycling has sapped me of the energy that I have needed for parenthood. Thankfully, I think I am starting to find a balance. I can cycle to work 2-3 times a week and generally be okay, but I do have to keep an eye on it.


With that schedule in mind, I am on pace to reach 10,000 by the end of the year. That assumes, of course, that I don’t break any more limbs and the weather holds for at least a few more months.

At the beginning of July, I declared that I would refrain from buying any books or miniatures for the month, and I am glad to report that I succeeded. In truth, between work, the baby, and the near constant stream of family and friends coming to see said baby, I had little time to think about it. I did, however, managed to read one book to completion (and very nearly a second) and to paint six miniatures. This month, I have decided to take ‘The Pledge’.

The Pledge is an idea that sprung up on wargaming forums a few years back. At its most basic, it is a declaration that you will paint more miniatures than you buy over a given time period (usually a year). There are lots of variations on the idea, but essentially, it is an attempt to actually decrease the number of unpainted miniatures a wargamers owns (often referred to as ‘the lead mountain’).

I have decided to extend the idea and have it cover my books as well. So...

I pledge that for the rest of 2014, I will read more books than I buy, and I will paint more miniatures than I buy.

It’s a clean slate starting today; I have not painted, read, or bought anything. I’ll let you know how I get on.
Posted by joe5mc at 02:17 4 comments: