Grave Mutations for Frostgrave (and Others!) 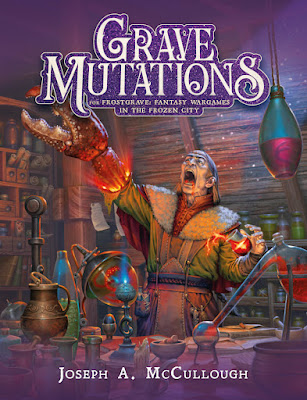 The d20 was not enough. Now is the time of the d1,000!
Grave Mutations is my new, self-published book that contains 1,000 different mutations for Frostgrave, arranged in a handy d1,000 table. With a bit of imagination, the book can also be used for Stargrave, Ghost Archipleago, and Rangers of Shadow Deep.
Extra eyes and animal parts, explosive sneezes and ink sprays, bodies of stone, iron, and glass, innate spells and exo-skeletons... There is no specific call for using the table, just a whole lot of weirdness with mechanical rules for each one.
To make the whole thing even more fun, my friend Barrett Stanley drew over 100 illustrations for the book, while Frostgrave veteran aRu-Mor provided the cover.
Ironically, this is the largest supplement I have ever written and comes in at 127 pages! So, head over to DriveThruRPG where you can check out an extensive preview and pick up the book both in PDF and in print-on-demand!
Posted by joe5mc at 02:57 9 comments:

Got a bit of painting done this weekend, continuing my work on boardgame figures. The barkeep with shotgun comes from Zombicide: Undead or Alive, while the rat warriors come from Mice & Mystics. I was surprised by how well they fit together. This bodes well for Weird West games of the future!

I've been spraying these figures with a heavier layer of varnish than usual, under the thought that boardgame figures probably get handled more than wargame miniatures. That might explain why I've got a bit of reflection going on in the photo, the shiny sheen isn't as noticeable live.

Still got a little over half of the figures from the Mice & Mystics box to go. The Zombicide one contains so many figures that it isn't worth count yet! 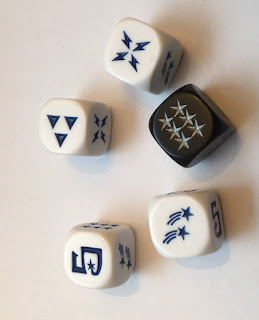 I recently introduced my family to Cosmic Wimpout, and it has proved an immediate hit. It's also the first competitive game that hasn't caused any bad feelings when people lose or are losing (a constant danger when gaming with an 8 and 6 year-old).
I first played Cosmic Wimpout at university and then promptly forgot about it for the next twenty-something years. Recently, I came across it again while reading The Hundred Best Hobby Games and decided to get a set. This proved slightly harder than expected, and I eventually had to order a set through ebay, from the USA. Even with shipping, however, it still only cost me £6, though I did have to wait about a month.
For those not in the know, Cosmic Wimpout is a simple dice game, with fun-looking dice. Players take turns rolling all five dice and collecting points. The game has a fantastic press-your-luck mechanic. Essentially, as long as players keep scoring points on a roll, they can keep rolling. However, they only keep the points for that round if they stop rolling before they 'wimpout'. There are also several situations that force a player to reroll, which really ratchets up the tension.
So, the game is easy to understand, it plays very quick, and no player is ever out of the game, as it is always possible to score a huge round. It can also handle as many people as want to play.
Considering its small size, it's just about the perfect game to throw in your bag and take it wherever. Because you never know when you are going to need a good game!
Posted by joe5mc at 05:54 No comments: 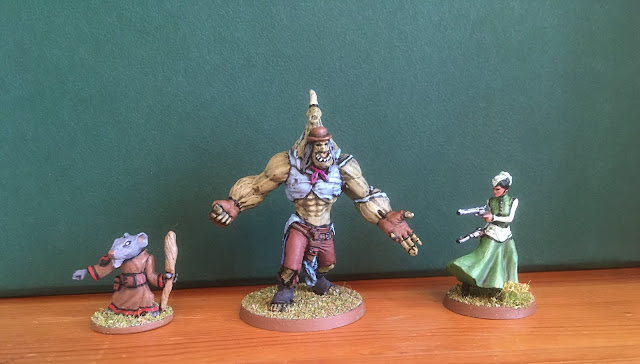 I spent a good deal of the weekend painting up board game pieces. I must admit, I do find it a bit of a strain, as the details are much shallower than on the traditional metal miniatures that I have spent most of my life painting. That said, with a bit of work and will, I think I've managed some pretty good results.

First up, we have the wizard mouse for Mice & Mystics, with a little ladybug on his arm. Then we've got a couple of figures from Zombicide: Undead or Alive, which kickstarted last year and which I just received. Normally, I don't like backing big, expensive kickstarters, and I only backed this one at a minimum level, but I really wanted the figures to use for Deadlands and the like. If I end up liking that game, that's a bonus! So, we've got a high-style lady packing a pair of revolvers and a giant mutant zombie thing (only about 100 to go!).