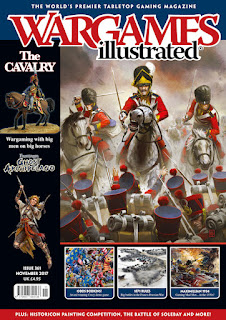 For everyone who has picked up a copy of Ghost Archipelago (thanks!), but hasn’t had a chance to try it out yet, you might consider picking up the new issue of Wargames Illustrated…

The new issues contains ‘The Floating Hulk,’ a solo scenario I wrote for Ghost Archipelago in which the Heritor and crew investigate a demasted ship floating just outside of the islands.

Ironically, this scenario marks the first that I’ve written that actually involves a ship, or at least what is left of one. I really enjoyed working on this scenario, and I find it an interesting one from a design point of view. I tried to set it up, so that, if everything goes exactly right, the scenario is relatively easy, but as soon as something goes wrong there is a cascading effect.

I’d love to hear from anyone who has played the scenario and hear how they got on!
Posted by joe5mc at 05:00 3 comments: 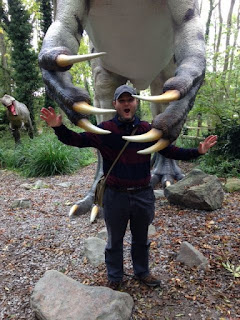 Last weekend, I engaged in a little Ghost Archipelago field research, along with my family, by visiting Port Lympne Reserve, which most people would call a small 'zoo', but which is more actively engaged in breeding endangered animals and releasing them back into the wild than most zoos. That said, the big attraction for my three-year-old daughter on this day was the Dinosaur Forest.

I must admit, I had pretty low expectations going in, but was very pleasantly surprised. Yes, it is just a bunch of model dinosaurs in a forest, but, they are very well done models, there are a lot of them, and they are full scale! It's actually pretty neat to walk around looking at these gigantic beasts, and pretty inspirational when you happen to be working on a game that has dinosaurs in it.

The whole place makes a nice, if not cheap, day out for the family.
Posted by joe5mc at 08:50 6 comments: 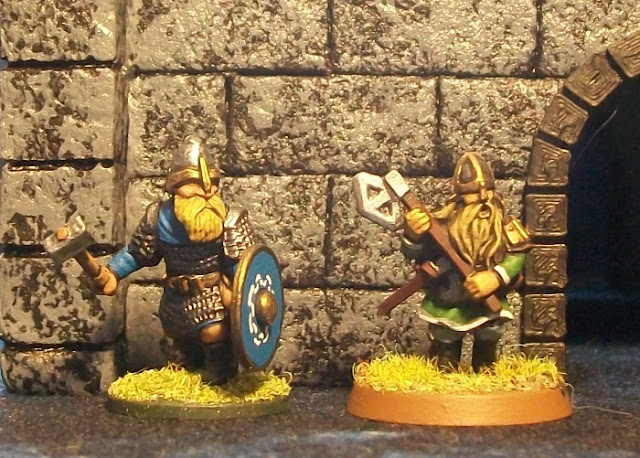 A few people have asked how the new Oathmark Dwarves compare in size to their The Lord of the Rings counterparts produced by Games Workshop. Well, luckily, I happen to have both in my collection. As you an see, there is a pretty significant size difference. In truth, it is the bulk of of the two figures that separates them the most. The Lord of the Rings figures have always been more slight, more 'true scale' than most miniatures on the market. Personally, I wouldn't use them together.

In truth, the Oathmark dwarves fit better with the other plastics produced by Osprey Games/North Star and with those produced by companies such as Gripping Beast. A few shots of the dwarves with Frostgrave Barbarians can be found elsewhere on the net.

In more important news, I painted a second dwarf! My unit is growing! 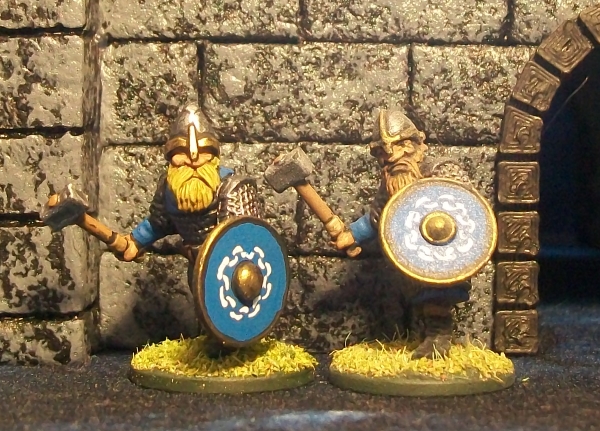 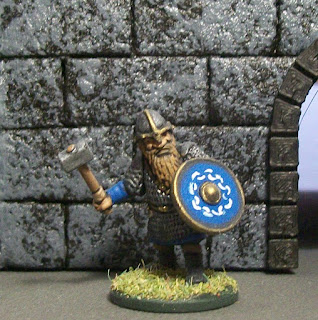 In celebration of the announcement of Oathmark, I thought I would show off one of my first painted Oathmark miniatures. Here is the doughty warrior, dressed in his chain mail, with his trusty hammer and shield. I didn't spend too long painting this guy as he's just one of a unit, and I am more concerned with the over all effect of the unit, than I am with this particular figure. Also, I used him to test out the shield design that I hope to use as the unifying symbol of the 'Blue Army'. It's just a simple circle of wiggles, but at a distance gives the impression of a kind of Celtic tangle. I think it'll look good multiplied across a unit and an army.

This figure is actually a very slight conversion. The shield arms in on the sprue are designed for the shield to be held high in a more shield-wall look. I wanted a bit more of an open-form look, so I took one of the bow arms, snipped off the bow, and used it for the shield arm, which seems to work really well.

I've mounted this guy on a 20mm round base, even though Oathmark uses 25mm square bases. Why? Because I'm a rebel who doesn't by the rules, even when I'm writing the rules! Actually, it's because I've got some nice movement trays for these to slot into that should work perfectly.
Posted by joe5mc at 07:05 10 comments: 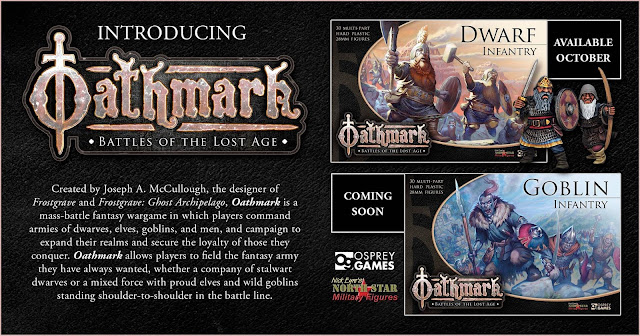 I’ll talk more about the game as I go along, but it will be a slow process. For now, enjoy the plastic minis that are coming soon!
Posted by joe5mc at 04:50 17 comments: 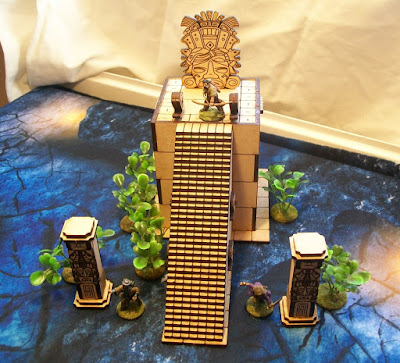 As we draw near the release of Frostgrave: GhostArchipelago, a lot of people have been asking me what kind of terrain they are going to need for the game. In truth, just about any terrain will do. The Ghost Archipelago includes hundreds of islands, including ones covered in jungle, swamps, mountains, ruins, you name it! That said, if you are looking for some ‘off the shelf’ pieces to get you started, you might consider checking out Things from the Basement. They are a US-based, laser-cut MDF company that is currently producing a line of ‘Inspire by Ghost Archipelago Terrain’. They already have one for Frostgrave. They were kind enough to send me a couple of samples of the new range, and I’ve just had a chance to put some together. 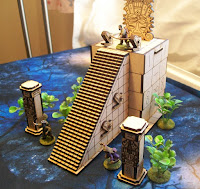 The large piece is The Temple. I must admit, when I first pulled this out of the package, I was a little intimidated – each level of stairs is a separate piece,and I’m not a great modeller. However, the whole thing went together quite easily and, using nothing but a modelling knife, woodglue, and a q-tip, I had it done in 30 minutes or so. There is just room enough at the top for 2 or 3 models to fight it out, and even some cover for an archer to take up a good sniper position.

I also put together a couple of columns. These went together in minutes, and are delightful little pieces. They work perfectly in conjunction with the temple, but would also work independently as scatter terrain on any table. Columns and/or standing stones are likely to feature in a lot of Ghost Archipelago scenarios, so I would suggest getting 6 of them if you are ordering. 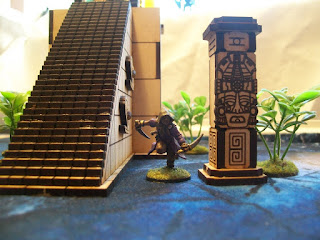 My only issue is how do I paint them? In truth, I kind of like the sort of sand-stone look they’ve already got, I’d just like them to look a bit more worn. I’m thinking some kind of wash, but worried that a brown wash might make them look more like the wood they actually are, while a black wash would just muddy them. Any thoughts and suggestions on this would be welcome in the comments section!

All-and-all, I’m extremely pleased with these pieces. I’ve also got the ‘Sacrificial Altar’, but I haven’t put that together yet. Look for it in a future post. I suspect these pieces are going to be involved in several battles in the not too distant future.

quick note about reviews – while these piece were sent to me specifically to review, I will never review anything that I don’t actually like. I’ll send it back instead. So, while this is just one man’s opinion, I hope you can consider it an honest one. In this case - Highly Recommended!
Posted by joe5mc at 03:02 11 comments: 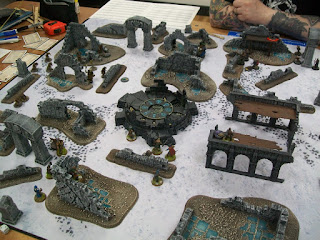 This past weekend, I met up with Dan and Dan at Chaos Cards in Folkestone for a round of Frostgrave. Chaos Cards is a lovely store – bright and spacious, lots of gaming tables, and snack machines! It costs £2 per person to use one of their tables for the day.

Dan 1 brought all of the scenery for the game, most of it hand made. As you can see we had a table that was properly crowded with ruins. Dan 2 bought a serious bestiary in case we had some random encounters.

This was the first ‘for fun’ game of Frostgrave I have played since GenCon, so I brought back Orderic the Enchanter from that game. He was now level 1 and showing off his flashy ring of teleportation. Along with his apprentice, Pavia, he had a full crew featuring a barbarian, man-at-arms, infantryman, 2 archers, a scout, 2 thugs and a thief.

Dan 1, who started off to my left had a gnoll elementalist, while Dan 2, to my front, had a necromancer.

We decided to play ‘The Stars are Wrong’ from The Frostgrave Folio. In that scenario, there are six pylons that occasionally fire a bolt of eldritch energy between two randomly selected ones. 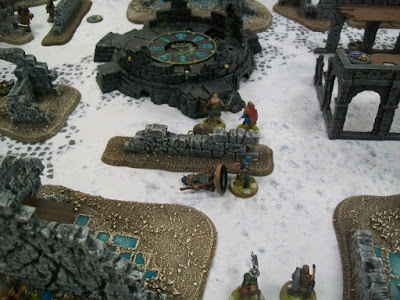 I got the jump on my rivals and went first. My warband advanced, with Orderic successfully casting Telekinesis to move a treasure into easy grabbing distance. Unfortunately, I was less than careful about my position. Moments later, a certain gnoll Elementalist lobbed an Elemental Ball onto my scout. He was fine, but Orderic, who was standing next to him was critical hit and exploded. (I have a history of having my wizards critical hitted early in games).

Thankfully I still had my apprentice, Pavia. She advanced and also cast Telekinesis…well, she tried to. She failed by four. Figuring my chances for treasure might be limited without my wizard, I decided to take the four points of damage to get the spell off (this would prove significant). The treasure floated closer, and my thug grabbed it.

The rest of the turn saw my enemies advance. One arrow nicked one of my archers doing 1 point of damage. Another cut my Barbarian for 2 points (this would also prove significant).

So, before turn two properly got underway, I had lost 40% of my warband, including my wizard and apprentice. I was able to laugh; my opponents were trying hard not to. 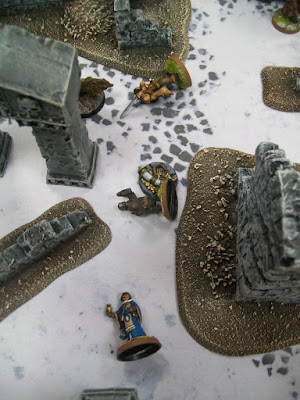 As bad as the game started, I ended up doing okay. Both of the treasures that I had Telekinesed were easy enough for my remaining soldiers to scoop up and run with. I even managed to grab a third, partially in thanks to a wandering zombie who provided cover. I also got a bit of revenge, when my Infantryman took out the gnoll apprentice (in fact, by the end of the game, every spellcaster had violently left the table).

The news after the game wasn’t so great either. All of my warband was fine, except Pavia, who didn’t make it.

Anyway, despite the somewhat random destruction of a third of my warband, it was great fun. In fact, if you can’t laugh at something like that, Frostgrave probably isn’t the game for you.

We are already talking about when to have our next match up, and seeing if we can recruit a few more players. So, if you are in the Folkestone area, drop me a line.
Posted by joe5mc at 03:19 14 comments: