For a much needed break! 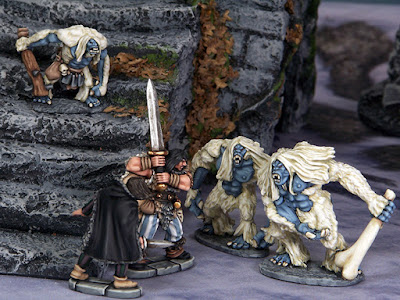 There are lots of reports coming in from across the UK that people are receiving their Frostgrave - Nickstarter packages. Hopefully, people in other countries should be receiving theirs soon. I look forward to hearing reports about their first games and how they find the rules.

In the last couple of days there has been an exciting little development for Frostgrave. The game has been granted it's own board on the Lead Adventure forum! Lead Adventure has been my favourite wargaming forum for awhile now, so I'm thrilled that these guys have gotten behind the game.

I will be using this forum as my main place to discuss rules, scenarios, and all things Frostgrave. That said, I will continue to post any major news items on this blog, as well as sharing occasional articles for the game or thoughts about game writing and design.

Anyway, head on over to Lead Adventure and check it out!
Posted by joe5mc at 06:22 5 comments: 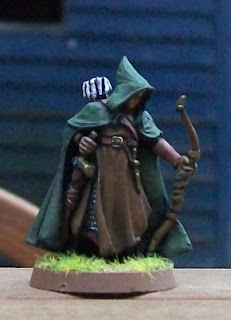 A few weeks ago, I was in London for work and got a chance to stop by The Orc's Nest, a little gaming store just off Shaftsbury Avenue. Among the many fun items on the shelves, were a batch of the newest Bones releases from Reaper. I have only minimal experience with Bone miniatures. I have been somewhat put off by their kind of rubbery texture and that fact that the weapons within the packs often look badly bent. Still, I thought it might worth giving them another try. One figure, especially, jumped out at me, an Elven ranger who looked like he would fit in well with the Dunedain I had recently painted up. Considering the soft nature of the Bones material, I thought I might be able to cut the figure off its integral base and mount it on a GW base, so it would fit in with the rangers. Well, for a mere £2.50, it seemed worth the risk.

I am pleased to say, working with this figure was a terrific experience. I was able to easily slice the figure off its base and remount it. Now they claim that Bones miniature don't have to be primed, that paint will stick to them just fine without it. I am curious if that's true, but in point of fact, I much prefer to paint over a black base instead of a white one, so I went ahead and primed the figure.

I took my time with the painting, doing my best to match the colours and treatments I used on my Dunedain. While white, rubbery bones material tends to make the detail on the figures look soft, I am happy to report that's not actually the case. The detail is very crisp - perhaps not quite as crisp as metal, but not far off. The only potentially bendy element on this miniature is the top of its bow, but it looked fine, so I didn't worry about it. (Apparently bends can be fixed by reshaping in hot water).

Anyway, I recently finished him up, and I've got to say, I'm very happy with results. The miniature really fits right in with The Lord of the Rings ones, a perfect Elven ally for my Dunedain. After this experience, I'll definitely be paying more attention to Bones. 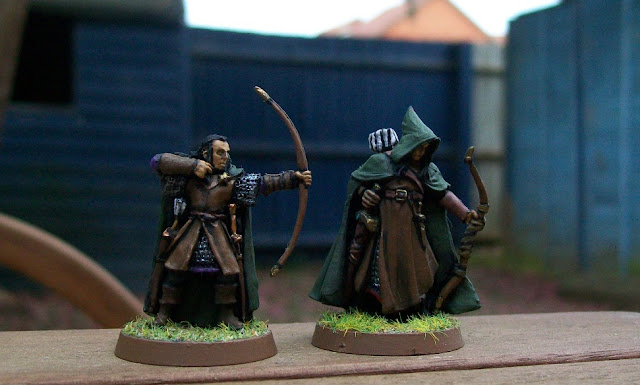 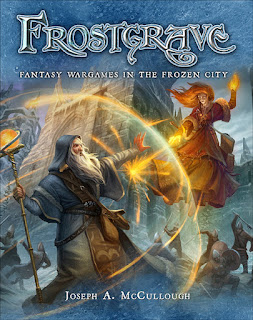 Over the last few weeks, all three of the major English-language wargaming magazines have carried reviews of Frostgrave, and, well, they are really good...

The first one I saw was in Wargames Illustrated, which I believe has the highest circulation of any wargaming magazine on the market. I wasn't too surprised to get a good review there as I did make a special trip up to Nottingham in order to play the game with the editor. Still, WI had this to say:

'I think Joe McCullough and the folks at Osprey Games should be justifiably proud of their achievement and I urge those of us who remember the AD&D adventures of our youth, who have ever read a fantasy novel or seen a fantasy movie to seek out a copy of this tome and sally forth on the road to adventure!'

Next came Miniature Wargames, which I believe is the longest-running wargaming magazine out there. Their reviewer said:

'For me, Frostgrave has a real flavour of the old school, fun, tabletop adventuring that was prevalent when I first got into D&D over three decades ago...Recommended - especially for the money (I think fifteen quid for a hardback set of good rules is a bargain).'

Then today, I got the new issue of Wargames: Soldiers and Strategy, which features a three-page review of Frostgrave, and it is probably the best of the three! This is probably my favourite passage:

'Frostgrave enables you to recreate this spirit on the tabletop. It allows you to play a game that has the narrative feel of an adventure by J.R.R. Tolkien, Robert E. Howard, Fritz Leiber, or George R. R. Martin, rather than play a medieval wargame with spells and monsters added on. The simplicity of the rules system also contributes to the atmosphere of heroic fantasy. Frostgrave is one of those games where the rules allow a game to be played, rather than the game being an enactment of a rules system. This is absolutely vital in a genre such as fantasy, where we are trying to have rip-roaring adventures, rather than creating historical verisimilitude.'

It is certainly flattering to have my game mentioned in the same breath as some of my favourite authors! More to the point, it does appear that the reviewers understand the intent of the game, and it definitely sounds like I managed to tap into a bit of their childish enthusiasm!

After writing the last blog, I saw a negative comment about the game online, and it got me down. (Enough that I've instituted a  'no more checking forums before bed' policy!). I've heard that to be an author, you have to have thick-skin. You don't (I don't) - but, if you don't, you'd better be able to get back up when you get knocked down! I'm back up. These reviews help. Really though, I just need to flip through the book again,to remember - hey, I'm proud of this game.

And many thanks to the guys who commented on the last blog - that helped as well!
Posted by joe5mc at 05:59 20 comments: