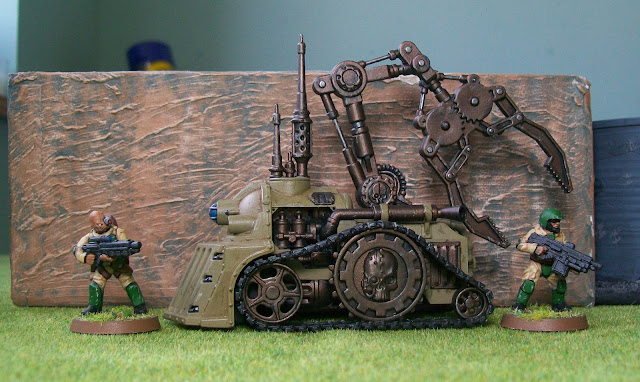 Work slowly continues on my Dropship Down project. First up, I added a couple of troopers with 'squad support weapons' as theses were lacking in my platoon. I'm trying to assemble 4 man fireteams, each with a support weapon. These guys are straight Stargrave builds. Most of it comes from the Mercenaries set, though there might be some Troopers pieces in there as well.

I also finished painting a construction tractor of some sort. This is part of the Games Workshop Galvanic Servohaulers set. I wish it didn't have the big mechanicum skulls on it, but otherwise, it's a lovely piece, and a perfect bit of scatter terrain. I admit, I didn't want to spend a large amount of time painting it, so it's is primarily two colours. That said, I did take the opportunity to test out some 'Weathering Pencils' that I bought in Copenhagen. These are pretty neat as you just draw directly onto the model, and then apply a bit of water. (These come from AK Interactive). I really didn't spend long on it, but I think it did a great job of giving the vehicle an old, rusty, weather-beaten look. With a bit more time and practice, I can see these being great tools.

What's next? Well, I definitely need to build a lot more terrain. I'd also like to assemble a rocket-launcher team, to give the platoon a bit of heavy firepower in case of enemy vehicles. Then, I think it will be time for another vehicle. We'll see. 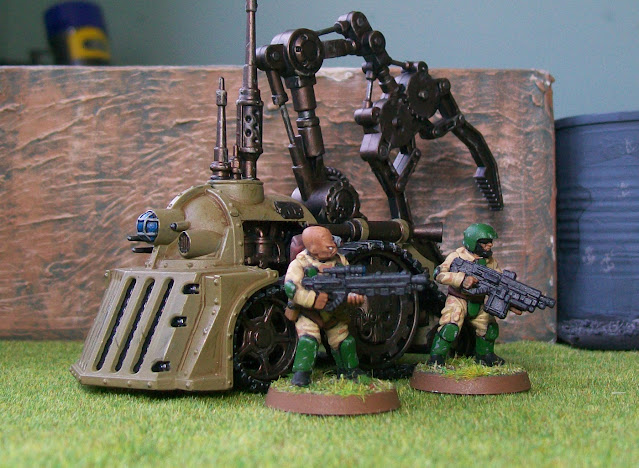 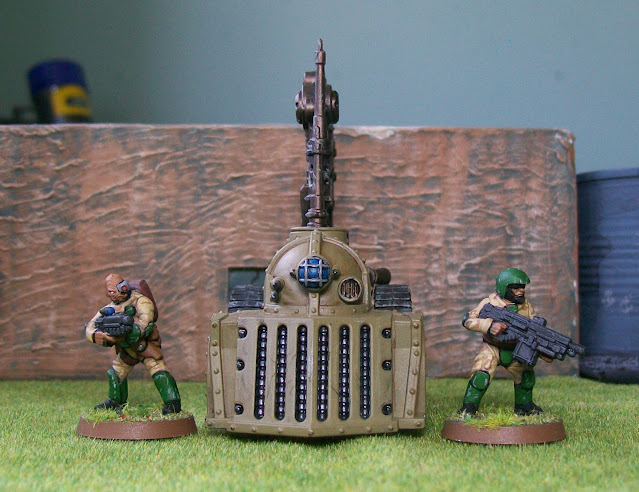 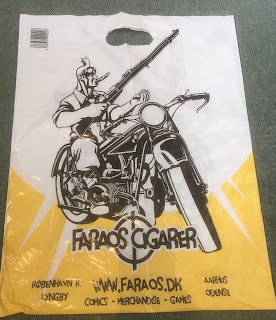 Recently, I had the good fortune to spend a day in Copenhagen with my family. It was the first trip to this intriguing city for any of us. In the morning, we took the kids to the Aquarium, and they were entranced by the hammerhead sharks (among other things). After lunch, my wife wanted to take the canal tour, so we spent a relaxing hour floating along, going under bridges, and seeing lots of interesting sites. After that, it was my turn. I wanted to visit the local gaming store. While we managed to turn a 15-minute walk into a half-hour walk, not including the drink break, we eventually found it… our should I say ‘them’.

Upon walking into Faraos Cigarer, I knew I was walking into a special store. It was big, and positively crammed with games. My first stop was the role-playing wall. And I do mean ‘wall’. A giant shelf, fifteen-or-more feet high, and nearly the width of the shop, it had everything. The only downside is that I could only reach about 40% of the books on the wall! (In fairness, even their tallest customers are going to need a ladder for some items).

On the other side of the shop they had a section of discount games and used/collectable games, including more than a few rarities (priced appropriately). I took advantage of some of the cheaper options, picking up a couple of the out-of-print Fantasy Flight, Warhammer 40,000 RPG Books. I also found a 3rd Ed GURPS book that I have wanted for a while, in near-mint condition!

With my wife entertaining the kids, I knew I was on limited time, so I ran around the shop a bit like a headless chicken. I only skimmed the board games, knowing I didn't have space to carry any of them back, but soon I realized something was missing – miniature games! When I made my purchases, I asked the guy at the counter if they carried any mini games and he said – they were in their other shop, just around the corner!

Checking in with my wife, she insisted that I take a look at this new store, even though the kids were getting hungry and tired. I’m so glad she did. Although the second store wasn’t quite as big, it was just as crammed with goodies. One wing of the store was devoted to collectable card games, the other to miniature games. As expected, this was dominated by Games Workshop, but had a good selection of other stuff as well. They even had a chunk of my own games! I’m hoping that means they are popular and not that they bought in a bunch they couldn’t sell! 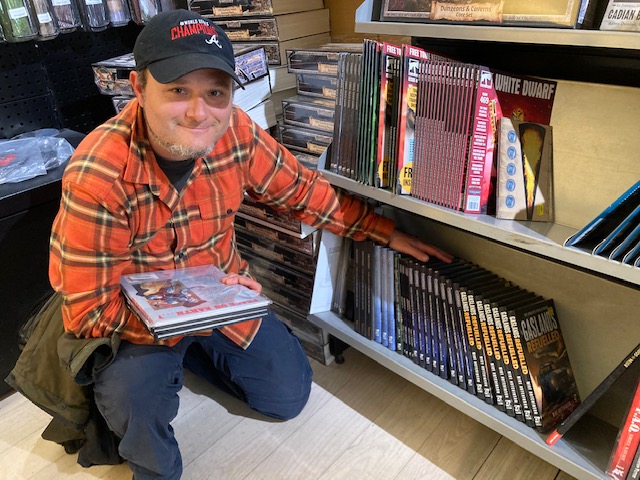 The store also had a downstairs gaming area reached by a spiral staircase in the middle of the shop. I picked up a few items from this shop as well, which I’ll talk about in later posts, and had a quick chat with the guy at the counter. It was Magic night, and he was a Magic guy, so he didn’t know much about mini-games played in the store, other than they happened sometime.

Amazingly, they also have a comic store in close proximity, but I didn’t have time to check out it.

Honestly, if you put those two shops I did see together, it might just be the best gaming store I have ever seen. I feel like I have a little unfinished business exploring them, and I know what I’ll be concentrating on next time I’m in Copenhagen (I do also want to check out the National Museum).

** Curiously, if you took a guess at the translation of the store name, you would probably be close. It apparently means 'Pharaoh's Cigars'. There must be a story behind that name.