As it relates to money, ‘restraint’ is not a virtue highly prized by modern, western society. In fact, our consumerist culture does everything it can to promote spending, even pushing people to spend a lot more money than they actually have, and sending them into horrible debt spirals. It’s a trap that I fell into once; though I’m proud to have battled my way back out of it.

Since then, I have learned a bit of restraint and over the last year or so, have even gotten a bit ahead of the game. But there are lean months ahead. With the birth of my daughter, and my wife going on maternity leave for seven months, times are going to be a bit tight. We will managed, I’m sure, but I want to be smart about it.

There are still two areas in which my restraint is often put to the test, miniatures and books.

Miniatures: Over the last couple of years, as part of my battle out of debt, I have sold off a majority of the unpainted (and even a lot of the painted) miniatures that I own. Despite that, I still have at least a couple of hundred unpainted minis down in the troll cave. Before my daughter was born, if I had painted at my normal rate, and not bought any more minis, I suspect it would have still taken me well over a year to paint all of those miniatures. Now that Freya is here, I suspect that it is a 2-3 year supply.

Books: I’m a little better about books, if for no better reason than I have less space to keep them. That said, with my birthday just past and several recent purchases, I have at least a dozen on my to-be-read shelf, a combination of heavy history and science-fiction novels (A few of those books illustrate this blog). Again, I suspect it’s a 5-6 month supply, pre-birth, and I have no idea how much now.

So, here is my goal. For the entire month of July, I am going to try not to buy any books or any miniatures. That may not seem like a big deal to some, but it will be a real test of willpower for me. Thankfully, I’m not planning on attending any shows, or going on any trips that often make such purchases much more likely.

If I make it to August, I will review the situation and see what progress I have made. 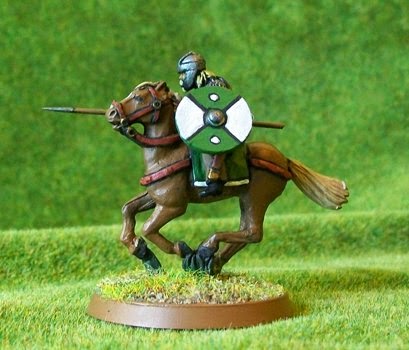 In the two-and-a-half weeks since the birth of my daughter, I have nearly painted one miniature. (Today could be the day!).  Partly this is time lost to diaper changing, cute cuddling, and sleep-seeking, and  partly it has been caused by the flood of visitors coming to see the little one. That’s all fine, and I don’t mind. It just means I don’t have as much to show off on the blog.

I did find time though, to take a couple of snaps of the figures I finished just before the birth. At the time, I was working on some warriors of Rohan, based on Musketeer Miniatures. These figures are a real joy to paint; both the sculpting and the casting are so crisp, and the detail so distinct, that it really compliments my painting style, which relies heavily on black-lining between detail. 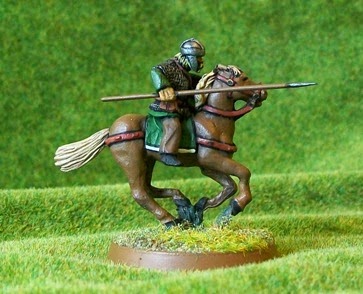 The biggest challenge with these miniatures remains the shields. Except for the boss, the shields have no detail, so everything has to be painted  freehand. Also, my goal is to give every man in the force a unique shield design, while keeping a coherent look for the entire army. So, I’ve decided I will only use four different colours on the shields: green, white, cavalry brown, and black. Hopefully, this uniformity of colour will offset the different designs. 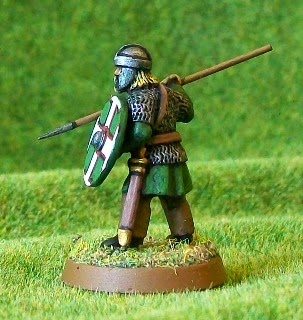 As for the designs themselves, I’m going with a bit of trial and error. I think most of the shields will end up with some kind of four quadrant design as it is generally easy to paint, but looks very effective, especially from a couple of feet away (the distance you see figures when they are actually on the wargaming table). That said, I’m experimenting with some more complicated designs as well.

So, here is my force so far, one rider and a couple of warriors. I’ve got a couple more half completed, which will appear soon (baby permitting). 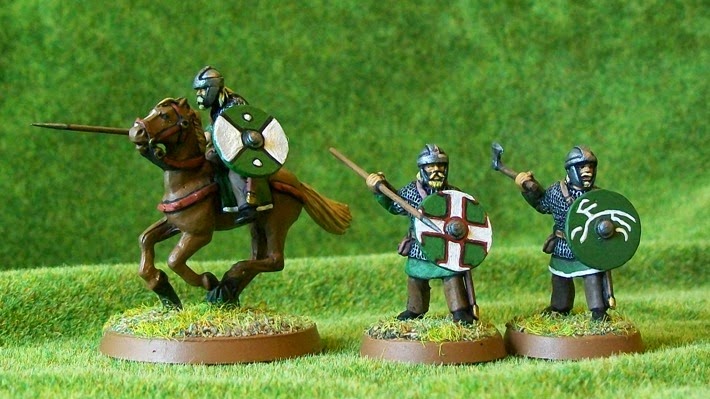 The Future Before Me

Things have changed, that is for sure. Although I have seriously enjoyed them, the last few days have mainly been a constant struggle to keep the place tidy and get enough sleep. Little Freya has so far been a mild-mannered and generally quiet child. Unfortunately, she has her nights and days a bit confused. For example, my wife kept track of her feeding schedule two nights ago. 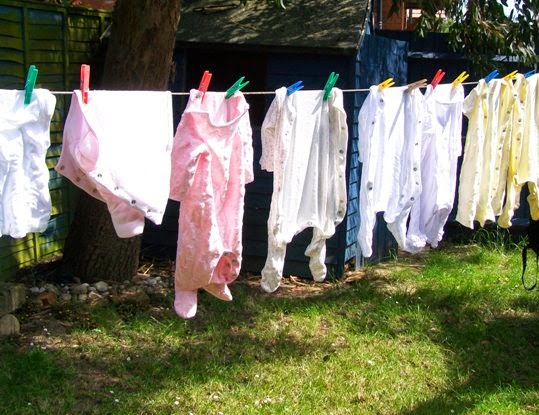 After we finally got her to sleep around 10:30 PM, she woke up for the following feeds:

After that last one, she went to sleep for a wonderful three hours. Now, considering those feeds took anywhere from 20-40 minutes and about every other one was followed by a nappy change (or two, or once three) and you come to realize there isn't a lot of sleeping gong on there. Still, not so bad at the moment. The real test will come when I return to work.
Posted by joe5mc at 01:52 No comments: 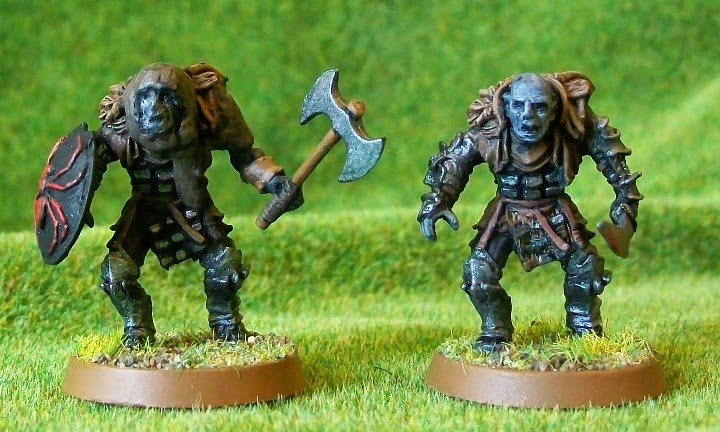 When collecting Lord of the Rings miniatures, it is pretty safe to say, you can’t have too many orcs. Mostly, I use Wargames Factory plastic kits to assemble my orc forces, but I’m not above throwing in models from elsewhere if they fit the part.

A few months ago, I acquired a Games Workshop Grishnak. This guy looks exactly how I imagine LOTR orcs to look: hunched, bandy limbed, wearing a rough mixture of clothing and armour and carrying a crude weapon. He also scales well with the Wargames Factory orcs.

Soon after painting up Grishnak, I acquired another copy of the figure as part of a large trade. While I’m not above using multiple copies of a figure on a battlefield, I thought I would try my hand at a little conversion. I figured, it’s an orc, it is supposed to be ugly, so how bad can I mess it up? 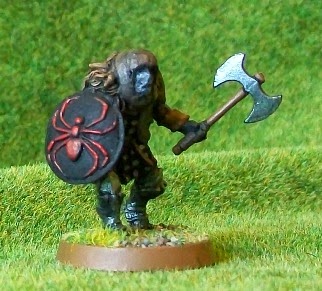 My first thought was to give him a helm, but when this proved beyond my sculpting ability, I changed it to a rough head scarf. It’s not perfect, but it works well enough. The model comes with a separate left arm. I replaced this with a WF orc arm, sculpted a shoulder sleeve, and gave him a big axe. I’m mostly happy with all of this, considering how little converting I’ve done before, but I thought it would be nice to have a feature to draw the eye away from the rougher edges. Luckily, I had the perfect thing, a spider shield. The shield actually comes from a 40mm Bronze Age skeleton, but works great for 28mm.

I don’t spend a lot of effort painting orcs; it doesn’t really seem worth the effort. A lot of black, brown, grey, red and metal generally gets the job done. By confining the red to the shield, it ensures that the eye is drawn there.

I dubbed my new orc, Ugrat, and I have plans for him to lead some goblins into battle soon.

(For those who are wondering, this was all done before Freya’s appearance. I haven’t had a chance to touch a paint brush since).
Posted by joe5mc at 09:50 4 comments:

Today I turn 38, and though I have rarely made a big deal of my birthdays in the past, this one seems particularly insignificant. Three days ago, my daughter, my first child, Freya Belle McCullough was born at 6:55 am, weighing in at a healthy 8 pounds 15 ounces. Mom and baby are now home from the hospital and doing fine. Freya even allowed us a nice four hours of sleep last night.

So at 38, I am truly reminded of what ‘birthday’ actually means.

Updates on the Troll might be a more infrequent in coming weeks...
Posted by joe5mc at 01:35 3 comments:

Orcs Under the Bridge!

With only slow progress on my Glaurung campaign, I decided to set up a little game involving Rymond the Breelander on his journey to Dol Amroth...

Rymond had been travelling on foot for several days in the low and lonely foothills of the White Mountains. One afternoon, as the sun stood high and bright in the sky, he reached a dry riverbed and made his way along it. A mile or so further on, he spotted an old stone bridge across the dry bed. He would have given the bridge little though, accept that he could see vague shapes moving beneath it. Keeping under cover, Rymond slowly approached the bridge until he got a clear view. From the top of a rocky little hill, he could see four orcs sheltering from the sun. Although the orcs would be at a major disadvantage in bright daylight, four was more than Rymond really wanted to tackle. He was just about to sneak around, when he saw an old man, walking alone towards the bridge... 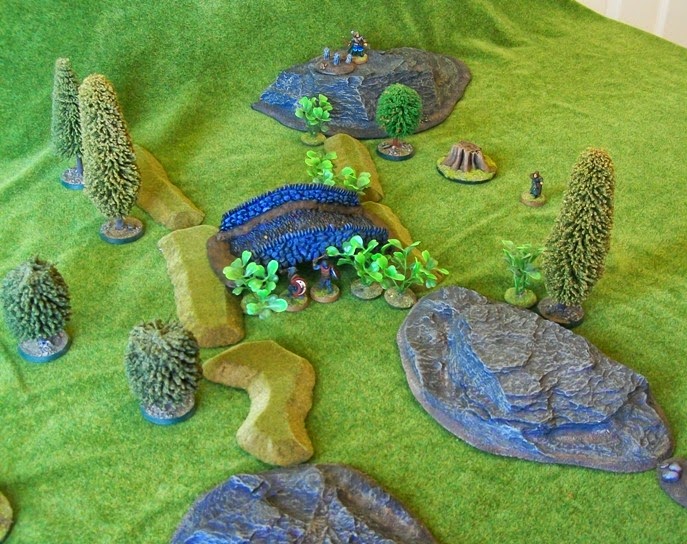 The orcs also saw the old man and must have assumed that he'd make an easy meal. Despite the harsh light, they came out from under the bridge. 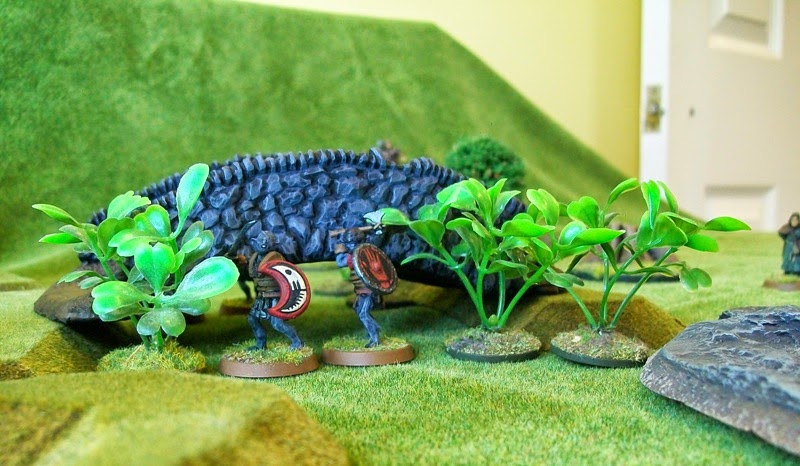 As the orcs crept out, Rymond strung his bow, and let fly a pair of arrows. The first skipped off the helmet of the lead orc, the second stuck in the shield of his mate. Rymond, shouted for the old man to run for the rocks. 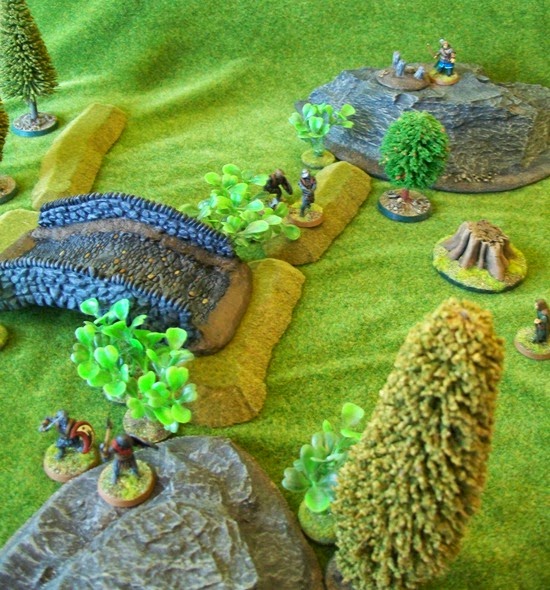 Realizing the closer two orcs would certainly catch the old man before he could make it, Rymond slid down the steep rocks, rolled to his feet and drew his sword. 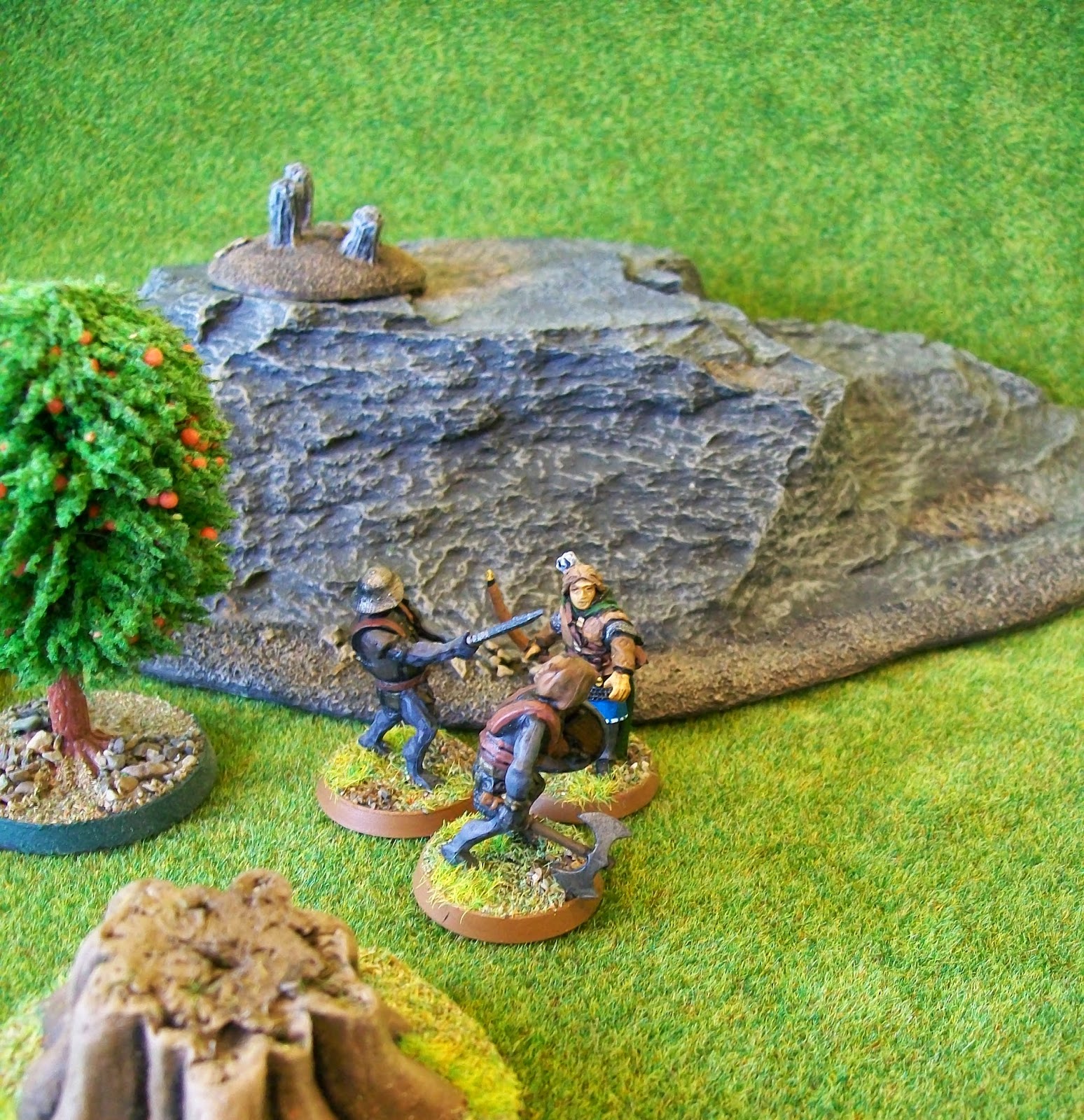 Rymond quickly dispatched one orc and pushed the other back. However, the other pair of orcs continued to chase after the old man. 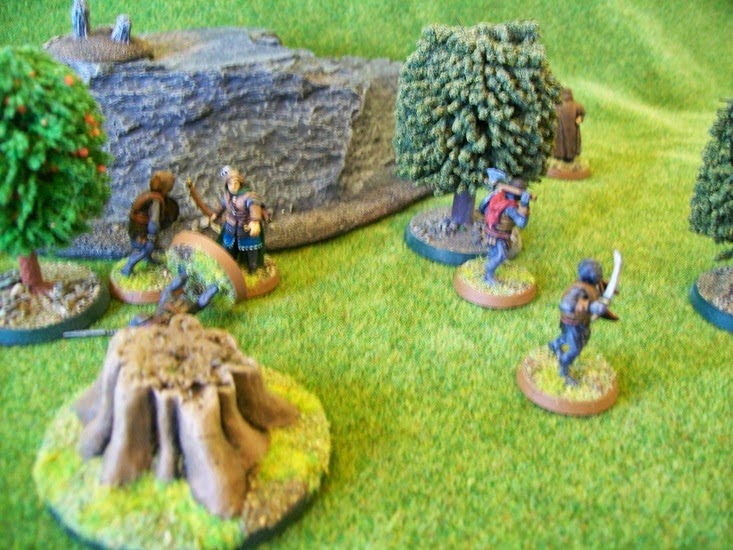 Rymond charged one of the pursuing orcs. Again finding himself outnumbered. 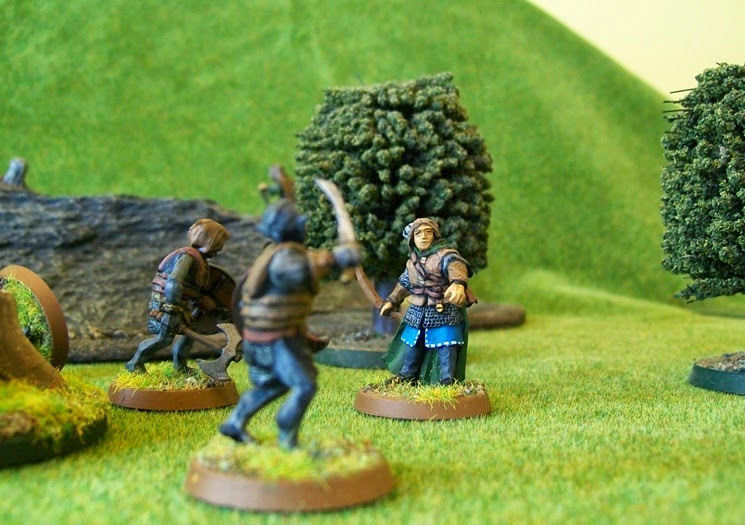 The fighting got desperate. At one point, Rymond stumbled backward, and only the sunlight, glinting off his sword into the eyes of one of the goblins saved his life (he used both fate points). Meanwhile, the final orc cornered the old man on the rocks. It turned out that the old man had a little more fight in him than expected, and in the first round of combat, he beat the orc back. 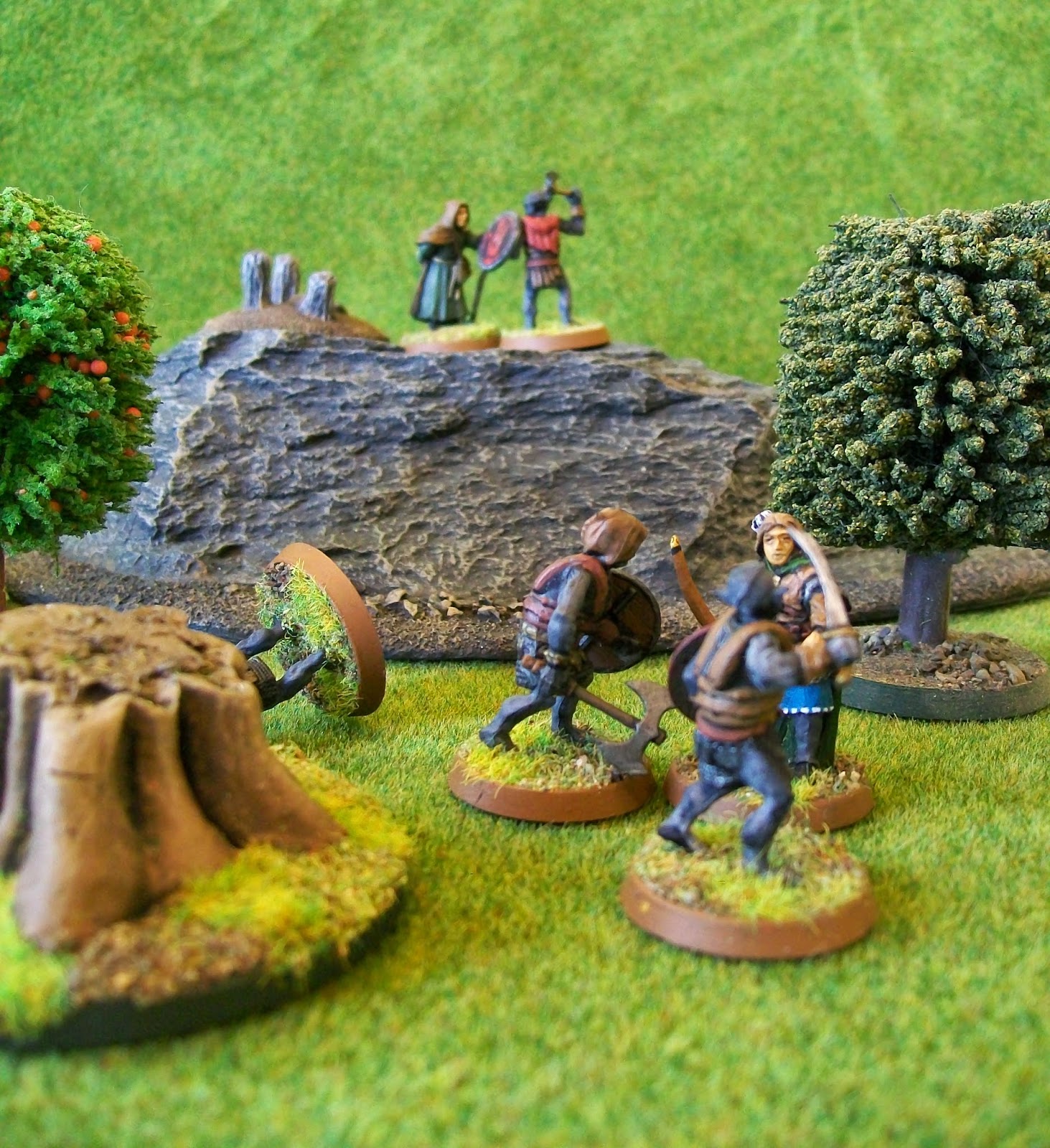 Rymond dispatched another orc, while the old man stumbled back from the orc on the rocks. 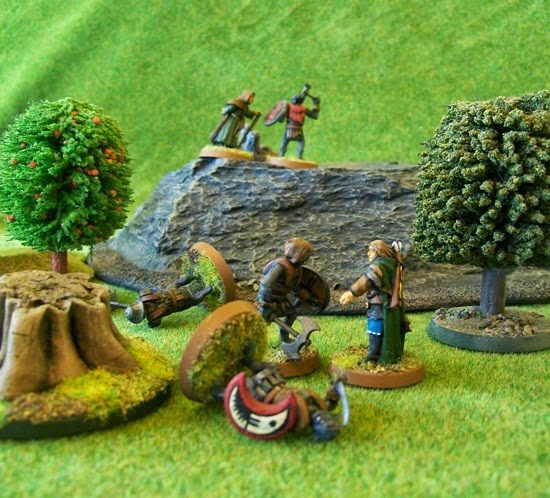 Just as Rymond cut down the last of the orcs facing him, the old man gave a cry and tumbled down the rocks into the riverbed. 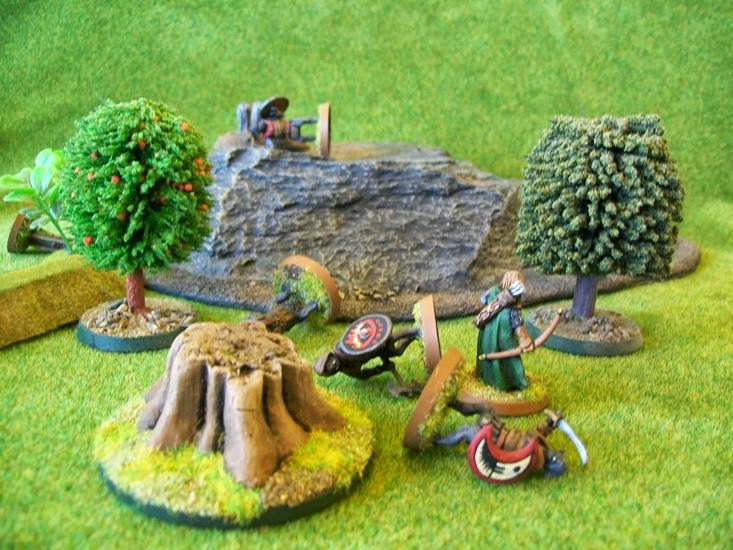 Before the orc on the rocks could chase after the old man, Rymond snatched up his bow from where he dropped it and fired an arrow square into his back. The old man had broken both an arm and a leg in his fall, but he was alive. It took Rymond many long hours to carry the man to the nearest shelter.
Posted by joe5mc at 07:39 6 comments: