Doctor Who: The Burning Prince 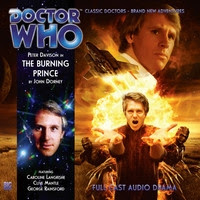 Sometimes, life gets temporarily so complicated, that you can actually forget the things that make you happy. Weird, but true. For example, for years (decades?) one of my favourite activities has been painting miniatures while listening to audio drams - usually Doctor Who. However, over the last year, I have had so little time to paint, that I temporarily forgot. My painting sessions became speed challenges - get out the paints, paint as fast as possible, get it all put away again, before life (children) intervened. It often didn't even occur to me to bust out the headphones as well.

In truth these sessions rarely achieved much in the way of happiness, and thus they became even more infrequent.

Lately, I have been thinking about my own happiness, and I realized that this is something I need back in my life. So, I acquired a few audios, booked out some uninterrupted painting time, and got back to this simple pleasure.

One of the first of this new round of audio adventures was Doctor Who: The Burning Prince, a really excellent example of Big Finish Productions. This is Doctor Who in full action/horror mode. In tone, it is more similar to Aliens and Predator than anything else. Although one might be skeptical about action done in an audio format, I challenge you to listen to the first 30 - 40 minutes of this adventure and not get caught up in the narrative drive. The tight script is greatly aided by the backing music and sound production.

In fact, the drive is so furious, that it can't quite be maintained for the full two-hours, and the second half doesn't quite live up to the first, but it is still a strong story overall.

Usually, Peter Davidson is not my favourite audio Doctor; however, it was really nice to hear him in this adventure, free from his usual overload of companions.

For those who might be thinking of picking it up, I encourage them to do so. It is a nice stand-alone adventure - though it hints at sequels. I will warn that it is also a product of a very specific, and very dark, era of Doctor Who, when the show bordered on nihilism. Not a an era I want to visit often, but it certainly was enjoyable this time around.
Posted by joe5mc at 06:00 2 comments: 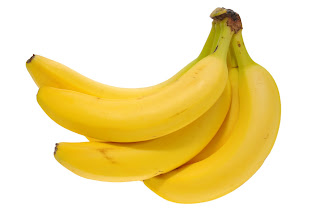 It's incredible how quickly time passes. Approximately one year ago, I set myself a challenge to eat 50 bananas, a fruit I have never liked and always generally been suspicious about. You can read all about it in this post.

I actually completed the challenge in about three months, but with everything that has been going on in life, I never got around to writing about the results. Which is a shame, because the results were rather extraordinary.

My issue with the texture actually disappeared rather quickly. Certainly by banana 10, I wasn't even thinking about it. I mean really, most food ends up a big squish mess anyway. The taste issue took longer, but day by day, I could actually detect a change. Slowly my reaction to the taste went from very unpleasant, to just unpleasant, to indifference, to very mild enjoyment.

It's true, by the time I had eaten the fiftieth banana, some three months after I ate the first, I just slightly enjoyed the experience.

Since I finished my challenge, I have eaten bananas irregularly. (They are just so cheap versus their nutritional value!). They are still way down on the list of fruits I enjoy eating, but they are on the list.

So, does this prove that you can make yourself like certain foods? Perhaps not, but it certainly showed me that eating something numerous times can definitely change my opinion of them in a positive way.  Next up - corguettes!
Posted by joe5mc at 03:33 6 comments:

First off, a big thank you to everyone who has bought a copy of Spellcaster! I don't think it is challenging White Dwarf in terms of sales, nor is it going to allow me to retire tomorrow, but it has certainly sold well enough to get me thinking about the second issue. On that note, I wanted to get a little feedback about how the issue could be improved.

What you've got in Issue 1 is what I can accomplish for $5. So, my question is, which of the following items would you be willing to pay $1 more for, if any.

Other (Let Me Know)

Are any of those worth $1 to you? In theory, the magazine could include all of them, although the price would then be closer to $12, rather than the current $5. Or, are you happy with the basic style, content, and look of Issue 1?

Either way, if you could comment below on what you would like to see for Issue 2, it will help me decide how to approach the next issue, and what improvements the readers would like to see.

Finally, I know a lot of people would like to see the magazine in a print form. For the moment, that's just not an option. Maybe someday a print compendium will appear, but for now, Spellcaster is going to remain a digital only product.
Posted by joe5mc at 02:21 50 comments: 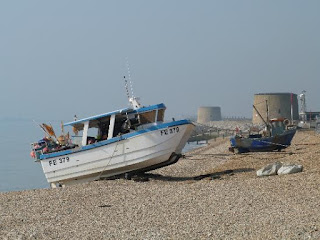 I am currently down on the Kentish coast, looking at houses. But I’ll get to that in a moment.

About a month ago, I turned 41. Normally, my birthday passes with little fuss, but this year I made a big deal out of it, by making it the first day of my new working life. It was the day I became a half-time freelance writer, half-time work from home employee. Actually, I decided to give myself the day off, and took the kids to the zoo instead (oh, the joys of being able to go to the zoo on a quiet Monday!).

This reorganization of my work was only the first step in my family’s master plan to rearrange our life. Step 2 was leaving Oxford (after 11 great years) and moving down to the Kentish coast to be near the sea, one set of grandparents, and one set of great grand-parents. We already have a buyer lined up for our house in Oxford, and that sale is progressing. It should hopefully complete early next month. Our plan is then to temporarily move in with my in-laws while we work on getting a new house of our own in Kent. It will be a bit of squeeze, especially with all of our stuff, but it is wonderful that we have that option.

In truth, I’m sure it will all be a bit of a pain, but if you want to change your life for the better, you often have to experience a bit of discomfort in the short term.
I’ll let you know how it all goes.
Posted by joe5mc at 05:54 12 comments: