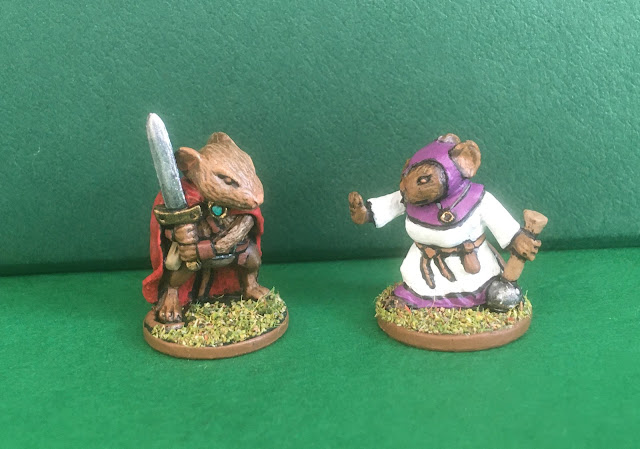 I am currently trying to gently nudge my family into hobby gaming and away from the classic family games that tend to bore me. After a bit of research, I decided to start my campaign with Mice and Mystics created by Jerry Hawthorne and produced by Z-Man games. It’s a classic, co-operative ‘Dungeon Crawler’ in which the player are all mice (or humans turned into mice) and must battle through various missions, taking on rats, roaches and spiders.

Players can choose from six different mice, which basically represent a classic Dungeons & Dragons party. There are 2 warriors, a cleric, a thief, a ranger, and a magic-user. You only use four at one time, but as we are a family of four, that’s perfect.

We’ve only played a couple of sessions so far, but they have gone well. I’ve had to simplify the rules just a tad, and make the missions a bit easier, but that doesn’t seem to have impacted the fun. My six-year-old son is especially taken with the game, even though he least understands the rules. He just loves the idea of his mouse bashing roaches with a big hammer. 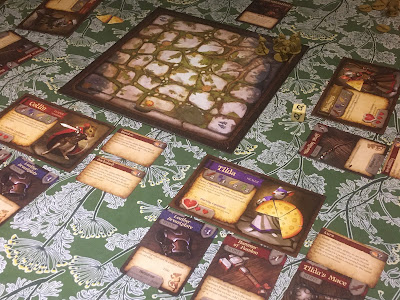 Hopefully, as we go along, I can slip in some of the more complicated rules. Maybe one day, I can even use it as a springboard to do some full-on role-playing! But I’m getting ahead of myself. For now, it is fun to just sit with the family, roll some dice, and get a little taste of dungeon delving.

It’s also given me a bunch of new miniatures to paint. Now, these are ‘board game’ pieces, so the detail is not as sharp as I’m used to, but it’s pretty good. I’ve already painted up the first two heroes: Collin the Warrior and Tilda the Healer. I really enjoyed Collin and think he looks pretty good. Tilda I’m less pleased with. I regret painting her in white – although I was trying paint them to match their cards in the game. Oh well, it’s still a lot better than an unpainted figure.

We will see how it all gets on! 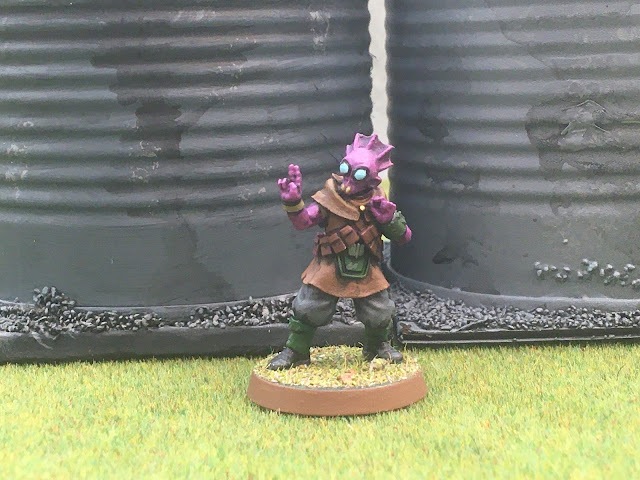 This is one of the Fatewinder figures from the Stargrave range, sculpted by Bobby Jackson. I think it works great for any kind of sci-fi mystic, magic-user, or telepath, and she will probably be joining my Dropship Down crew anytime they need that kind of support.
No lie, this figure was a real joy to paint. Just such sharp, crisp detail. Enough detail that it was fun to paint without so much I was pulling my hair out. I went with purple skin both to accentuate the 'alien' nature, but also to get a good contrast with the drab brown and grey of the clothes.
Posted by joe5mc at 06:07 4 comments: 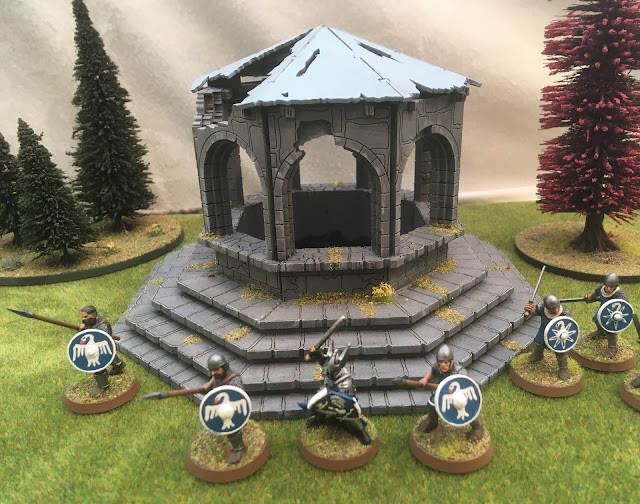 This is an MDF well from the Kromlech Frostgrave range. It went together easily. I already have a well I use for Frostgrave, so I decided to paint it up for a more temperate climate. Painting consisted of a grey spray primer and a couple of layers of lighter grey dry-brushing, and then a light blue for the roof, and black for the bottom interior. I also put a thick layer of white glue inside to give it kind of murky, watery look. I then glued on some little patches of flocking and a couple of tufts of flowers - which I think go a long way to giving an old, realistic feel. Really, it was a piece that took very little time to make look pretty good!

Having finished, I thought it would make a perfect backdrop for my Dol Amroth army. It just looks like the kind of thing that Gondor would have built in its heyday, but hasn't been able to maintain in the later, Third Age.