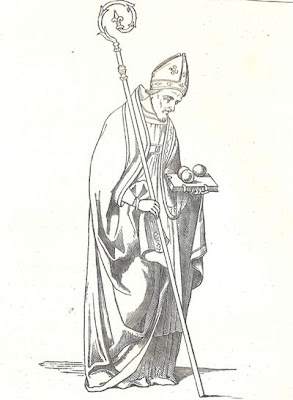 Now that Dragonslayers is out, several people have  asked me if I'm working on anything new. Well, here's a clue.

St. Nicholas, one time Bishop of Myra, is usually depicted holding three golden balls. This harkens back to one of the oldest stories concerning the saint. When Nicholas was still a young man, his parents died, leaving him with a great deal of money. Instead of immediately giving it away to the poor, as is common in many saint's lives, Nicholas looked around to how the money could best be used. Eventually he heard about an old man who was so destitute that he was considering selling his daughters into prostitution to prevent the whole family from starving.

On three separate nights, Nicholas went to the man's house and tossed a bag of coins (or ball of gold) through the window, ensuring the man could afford to marry his daughters into good families.
Posted by joe5mc at 13:55 No comments:

Dragonslayers - Released (in the UK)

My new book, Dragonslayers: From Beowulf to St. George has been released a few days early in the United Kingdom and is now available to purchase!

Strangely, of all the books I have written, I am most excited to see this one reach publication. I think I'm just a little more proud of it.

It's only just come out, but it is currently sitting at number 83 in Amazon.co.uk's Books/Mind, Body, Spirit/Mythology/Folklore category.  Well, I guess that is better than not being on any chart.

If you have any interest in dragons and the legendary heroes that battles against them, pick up a copy.
Posted by joe5mc at 10:05 No comments:

Word of the Day: Peradventure

According to the Penguin English Dictionary,

I don't know if anyone uses the word 'peradventure' anymore. The dictionary notes it as archaic. However, I came across it twice in two days in completely separate works. The first was The Legend of Sleepy Hollow by Washington Irving.  He uses the word several times in his fun, if overly long, tale.

One day later, I saw the word again, this time in a quote from a 17th century work concerning snakes and dragons.

You read archaic works, you see archaic words, fair enough. I think in all cases, I saw it used as an adverb. Having read the definition, I'm not real sure how to use it as a noun. 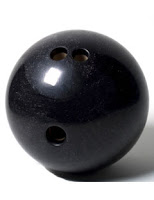 The new season of Friday, after-work bowling got under way this week for me and my bowling buddy, Rufus. In two games, I notched scores of 115 and 125.  Our third game was destroyed by a malfunctioning pin-setter, that dropped a random number of pins with such frequency that we eventually gave up. Still, a good way to unwind at the end of the week.