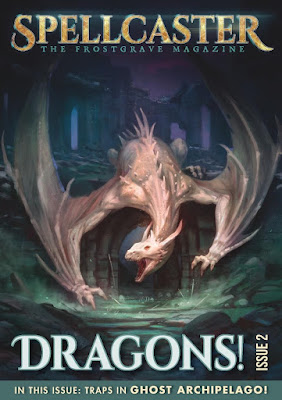 After several months of work, Spellcaster 2 is almost ready! It should be up for sale in December, hopefully early December, but I'm not going to commit myself to a specific day.

As you can see from the cover (once again featuring stunning artwork from Dmitry Burmak), the lead article for this issue is dragons! I've gotten so many requests for dragon rules in Frostgrave that I just couldn't resist it anymore. Not that I really wanted to. These aren't the kind of monsters you are going to roll on the random encounter table. These guys are bad news...  There is also a dragon-hunting scenario, for two warbands working together.

It's not all dragons though. The issue also includes rules for traps in Ghost Archipelago, including a full trap list themed for the Lost Isles. This section also includes a solo scenario that makes full use of these traps.

Beyond that, for a bit of fun, I have included some rules modifications and a scenario for using  Frostgrave to fight mech battles in the far-flung future!

That's the main features, there are a few other things in there as well.

Having learned a few lessons from Issue 1, I have made some changes to this one. This issue is longer than the first one, is in A5 format, and features professional internal layout and design. It does also cost a dollar more at $6.

One other major change - this issue will be offered print-on-demand through RPG Now / Wargames Valut and hopefully through Amazon as well. Not sure of the pricing on that, but it will be more or less $6 plus the cost of production.