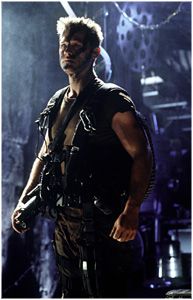 Yesterday I admitted to having a soft spot for the much-loathed movie, Soldier. However, that doesn’t mean I think everything about it is great. In fact, some parts are just downright stupid.  After a bit of consideration, here are the stupidest.

1. Garbage Planet: As I mentioned yesterday, I think a garbage planet is an awesome setting for an action-adventure movie. It’s also a heavy-handed metaphor for what is happening to the main character. Unfortunately, it makes no sense what-so-ever. Assuming for the moment that someone is willing to go through the trouble and expense of getting garbage off of earth and up into space, why not just fire it into the sun or out into the void of interstellar space? Heck, if you absolutely feel the need to dump it on another planet Jupiter is a lot closer and you aren’t likely to do much damage to its environment.

Instead, in Soldier, vast garbage ships make the run to another solar system and dump their trash on a human habitable planet! You don’t have to read much sci-fi or study deeply into astronomy to realize that human-habitable worlds are few and far between.  Are you really going to waste one as the galactic dust-bin?

2. Todd Survives the Trip: Okay, let’s give them the garbage planet. Now the main character’s presumed dead body is thrown into a garbage ship, taken who knows how many light years, gets dumped, and manages to survive the trip!  So, not only is someone transporting all this garbage, they are doing so in cargo holds safe for human survival.   Then, the garbage ships drop low enough into the planet’s atmosphere so they can drop their contents low enough that someone can survive the fall.

3. Planet-Killer Bombs: Near the end of the movie, the head bad guy turns to one of his underlings and says something like ‘Do we have any of those planet-killer bombs onboard’.  Wait, the ranking officer needs to ask if they have any weapons capable of blowing up a planet on the ship? Good job reading the pre-mission report.  It gets worse, his subordinate answers: ‘we’ve got fifteen of them’.  Fifteen? Just encase you need to blow up this planet and fourteen more on the way home…Luckily, an officer of the bad guys (unspecified) military rank can detonate planets without too much worry about repercussions – hey, it was just a garbage planet anyway…
Posted by joe5mc at 00:38