Legendary Swords and The Nibelungenlied 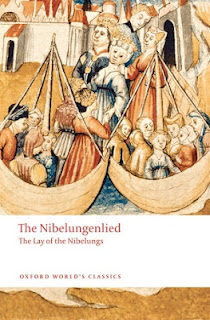 I am currently crawling my way through The Nibelungenlied (The Lay of the Nibelungs), the German Medieval romance that tells the story of the great hero Sivrit.  These days, the story is probably best known for its connections to Wagner’s Ring Operas and the story of Siegfried.

One of the little details that made me smile was the name of Sivrit’s sword.  As mentioned before on this blog, I have an interested in named swords.  So much so, that I really ought to write them down somewhere. That somewhere, I’ve decided is here.  So I’ve created a new page on the blog for legendary swords, which can be accessed by the tab on the top.

Sivrit’s sword is called ‘Bulmunc’ and it is described as follows. ‘an elegant broadsword, which was so sharp that it never missed its mark when it struck upon a helmet – its edges were of fine quality’.
Posted by joe5mc at 11:21