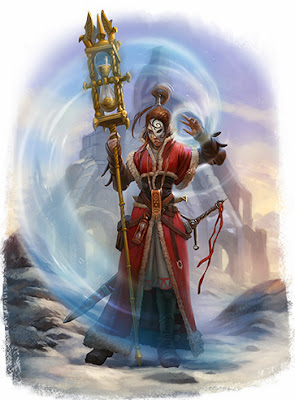 Not too long ago, I announced that I had been commissioned to write a fantasy wargame called Frostgrave for Osprey’s wargames series. The game is set in the frozen ruins of a magical city overrun by undead and other dangerous creatures. The players each control a wizard from one of ten different schools of magic, each with their preferred list of spells. These wizards are then allowed to hire an apprentice as well as a group of soldiers to accompany them into the ruined city in search of lost treasure and magical secrets. Once in the ruins, far outside the laws of society, it is every warband for itself...

I knew from the beginning that I wanted Frostgrave to have a little bit of classic Dungeons and Dragons flavour. Some of that would come from the setting and the large part played by wizards, but I wanted something a little more, some connection to actually playing the venerable role-playing game. While I was thinking about this, I also began to think about the mechanics of the game, and, as so often happens, one question ended up answering another.

Most wargames these days still use six-sided dice as their main means of randomization. It is easy to understand why. Everyone has a few d6s lying around, even if they have to raid the Monopoly set. Also, since people are used to seeing these dice, they are less intimidated by games that use other, stranger dice. That’s the theory anyway. The problem with the d6 is that it only has very limited outcomes (six to be exact) and thus it is difficult to use a d6 to  ifferentiate probabilities. That is to say, the chance of rolling above a 3 is a lot more likely than the chance of rolling above a 4. How then do you represent a chance that is only a little bit more likely? You can roll multiple d6s and add them together, but this introduces a bell-curve into the probability of results. This is undesirable as it means that modifiers such as a -1 to a roll will affect the probability of a roll differently depending upon the base target.*

Recently more and more wargames seem to be moving to d10 as their main dice of choice. I think this is a definite improvement and probably works fine in mass battle games, where the distinction between troop types doesn’t need to be as refined. However, in a game like Frostgrave where every miniatures represents an unique individual, I wanted to take it one step further. Thus, I decided the game would use a d20 for all rolls.

As far as I know, the twenty-sided die didn’t exist before Dungeons and Dragons, and even though it was just one of six different dice used in the game, it became the die that symbolized the game. This is mainly because it was the die used to make attack rolls, the most common roll in the game. So, by selecting the d20 as the randomizer for Frostgrave, it draws an immediate link with D&D. Now, the actual attack roll in Frostgrave doesn’t work anything like the one in D&D, but I’ll go into that in a future post.

So, not only does the d20 give me the connection I was seeking, but I also believe it gives me the best use of probability. With twenty different outcomes, it is much easier to establish comparative probabilities, with each number difference being a straight 5% probability difference, and by only using the one die it means that modifiers remain consistent.

*It is also possible to roll a number of d6 independent of one another, needing a certain target, with the number of dice hitting the target determining success. However, the math needed to understand the probability of results is extremely difficult and certainly beyond what I wanted to put myself through in designing Frostgrave!