Peldroc the Hunter (Joins the Glaurung) 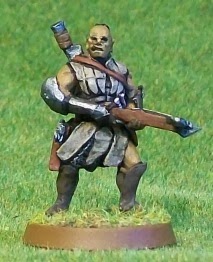 During the fanfare of Prince Altherion’s arrival in Dol Amroth, another hero quietly joined the crew of the Glaurung. Peldroc slipped into Dol Amroth at night and met with Breged in a decaying inn on the wrong end of the harbour. An ugly man, even before an orc blade horribly scarred the right side of his face, he knew his offer to volunteer would do little to enhance the reputation of the ship or its mission.

Peldroc was born a slave on the northern shore of the Sea of Nurnen, in the heart of Mordor. When he was ten, he witnessed the murder of his mother and ran. For months he fled north through Mordor, barely surviving by his wits and what he could steal. Eventually he reached the mountains and spent a harrowing two days picking his way through the broken heights of stone.

Only a few days after escaping Mordor, Peldroc was captured by a group of Gondorian far scouts. When they heard the young man’s incredible story, they took him in. They taught him the ways of surviving in the wilderness, how to move quietly without being seen, and, that which Peldroc most desired, how to kill orcs. 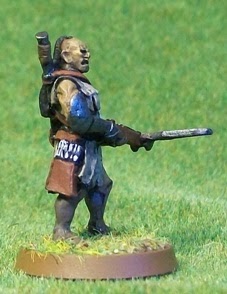 For the last twenty years, Peldroc has served with the rangers of Gondor in various far away postings. He has been one of their most reliable, patient, and deadly allies. He came to Breged with the personal recommendations of several of his commanders.

When Breged asked him why he wish to join the Glaurung, he replied that he wanted to be part of something bigger than himself.

Peldroc has one secret that he has never shared with anyone, though some have guessed. He is a half-orc, a goblin-man, and because of this he has struggled his whole life to control his anger and his bloodlust. 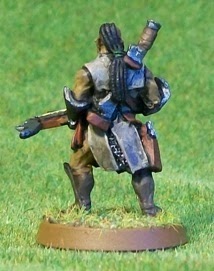 It is perhaps worth mentioning, in my version of Middle-Earth, all orcs have grey skin. So, although Peldroc does look a lot like the Uruk-hai in the movies, he doesn’t look that orcy to most people who meet him. Also, to address the Tolkien purists out there, I don’t actually believe Tolkien meant for crossbows to exist in Middle Earth. He certainly never mentions them in any of the books. That said, I personally, don’t find that it makes a huge difference, and frankly they do look cool.

Peldroc is based on the figure of an Uruk-Hai hero. I actually filed down his ears a little bit, so they would look more human. I also clipped the spikes off the front of the crossbow, as they looked impractical. I gave him a darker skin tone, both to get a bit diversity into the crew, but also to vaguely imply he came from somewhere far away.

I am very happy with his inclusion into the crew of the Glaurung. I’ve only got one hero left to go.
Posted by joe5mc at 01:19