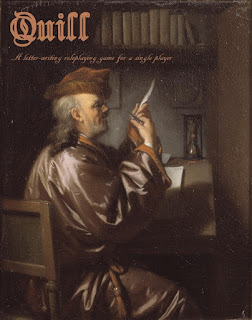 As far as writing goes, I'm not usually an envious guy. I'm proud of my own successes and happy for the success of others; but every so often something comes along that is so creative that I really wish that I had created it. (For example, I really wish I had written the story of Monsters Inc.!)

Recently, I had that experience with a little game called Quill: A Letter-Writing Roleplaying Game for a Single Player. In all my decades of gaming, I've never encountered anything quite like it. It's part game/part creative writing exercise. Essentially, the player creates a character who has three skills: penmanship, language, and heart. Then, the player picks a 'scenario'. Each scenario challenges the player to write a letter. It gives the specifics of the recipient and what the player hopes to gain by writing. Each scenario also includes a list of words that the player gains points by including in the letter, there are both common words and more poetic words. Whenever a player wants to use one of the words, he must roll to see if he uses the more common or more poetic word. The skills give him bonuses to certain rolls. And that's about it really. At the end of the letter, the player counts up how many points he has scored and checks the chart to see what kind of reception his letter received.

It is wonderfully simple, and yet endlessly creative.

I am very tempted to ask the creator if I can write a few Quill: Frostgrave scenarios. How much fun would it be to have your wizard writing to some far off mage asking for help or advice on a potion or particularly tricky summoning? There are just so many possibilities.

Wonderfully, the PDF for the game is available on RPGNow selling as 'Pay What You Want'. I paid $2, but frankly it is worth more than that. I might just have to go back and pick up the expansion Quill: Coal and Parchment, which apparently takes your letter writing underground! (Letter writing form the Breeding Pits anyone?)

Highly Recommended.
Posted by joe5mc at 06:04