Tales from the Miskatonic University Library 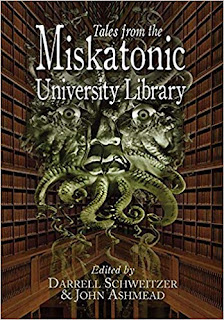 With the recent enjoyment I received from reading Cthulhu 2000, I have been on the look-out for other weird tale anthologies I might enjoy. Recently, Tales from the Miskatonic University Library came to my attention, and it intrigued me for two reasons. One, being a bibliophile, I am attracted to books that have books as one of their central themes, but also, being a bibliophile, I was interested because the book comes from PS Publishing, an England-based, small-press publisher specializing in fantasy and science-fiction.

Long story made short, I bought a copy. So, let’s take a closer look.

The book is 6” wide by 8.5” tall, making it just slightly shorter than average hardback novels, and about the same dimensions as Cthulhu 2000. It comes with a dust jacket with appealing (if not ‘attractive’) cover artwork. This artwork is repeated, without the text, on the front and back covers of the book, an interesting and slightly unusual choice. Normally I prefer cloth boards, but I like this. I even briefly considered ditching the dust jack, but this left a blank spine, which doesn’t look so great on the shelf.

The paper is of a nice, high quality; the printing is excellent, and the text is extremely readable. The book was printed and bound in England (by T. J. International). This is somewhat unusual as British printers usually can’t compete with foreign printers, and probably speaks of a small print run.

I was slightly disappointed the book did not have head and tail bands (these are the little bands on the top of the binding, inside the spine). It’s a minor point, but it’s a very easy, and not overly expensive, way for publishers to increase the quality feel of their books.

Overall, I was very pleased with the look and feel of the book. At £20 for 200 pages, this seemed a reasonable price from a small-press publisher.

Now, to the actual contents! The book features 13 short stories, from 13 different authors. One of these, Harry Turtledove, I would put as a ‘big name’. Of the remaining dozen, several are well-known within the weird-fiction/pulp/Lovecraftian subgenres.

Of the tales, I probably enjoyed about half of them. I don’t generally care for humorous, or tongue-in-cheek weird tales, and this anthology includes several. These may be great stories for those who are into such things, I’m not really qualified to say.

There were, however, a few tales that really stood out for me. 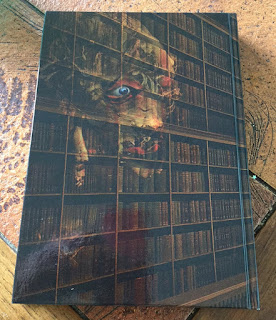 The first of these, and the first in the book, is Slowly Ticking Time Bomb by Don Webb. This is a terrific little tale about a pair of used/rare book dealers, a lost city, and a very odd book of magic. It’s a really inventive story, and covers a lot of ground in its 14 pages. Although it’s a horrific tale, there is a really nice heart to the story. Definitely an author to keep an eye on.

In the middle of the book comes Will Murray’s A Trillion Young. I’ve encountered Will Murray’s name many times before, but usually when writing about pulp heroes such as The Shadow or Doc Savage; this is the first time I’ve seen his Lovecraftian fiction. In truth, I didn’t expect to like the story, which opens up with the Necronomicon being digitized and released onto the web, but Murray drives it forward with such relentless energy that I couldn’t help but be pulled along. It’s basically an ‘outbreak’ story with weird tale trappings, but it is thoroughly enjoyable.

Probably my favourite story in the whole collection comes in the second half with The White Door by Douglas Wynne. This is a relatively simple tale about a book that moves itself from library to library. I think the amazing thing about the story is the ending. Douglas shows off some real writing skill in presenting an ending that is as horrific as any imagined by Lovecraft, and yet manages to put just the tiniest glimmer of hope in there. It’s rather refreshing in a genre with its clichéd ‘but it wasn’t actually dead! endings’.

While several others stories were enjoyable enough, those were the stand-out tales for me. In truth, I would have hoped to enjoy the whole book a tad more than I did, but, as I said, a chunk of the stories were not of the kind that would ever appeal to me. Others may find more to love.

Combining the text with the book itself, however, I am impressed by the offering from PS Publishing. The book's quality was high, the editing was terrific, and it contained some really good writing. I would happily order other titles from them.