Day of the Rangers by Leigh Neville 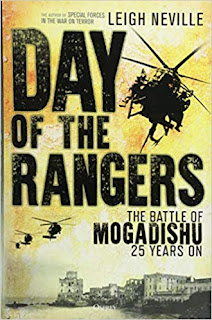 I can still remember, when I was seventeen, seeing film of the bodies of U.S. Soldiers being dragged through the streets of some rundown African city. At the time, I had no idea what it was all about, and being a typical self-centred teenager, I never bothered to find out, but the imagery has stuck with me.

I wouldn’t encounter the Battle of Mogadishu again until I was in my late twenties. One Saturday afternoon I rented a war movie called Black Hawk Down. Two thirds of the way through that film I realized that my hands were aching. I hadn’t realized it, but I had been gripping the side of the couch for at least twenty minutes. To this day, that film remains one of the best, most intense, pieces of cinema I have ever watched.

The movie led me to read the book on which it was based, Black Hawk Down by Mark Bowden, an excellent piece of war journalism.

Since then, I have maintained a real interest in the battle.

Well, a new definitive history has just been released. Day of the Rangers by Leigh Neville is an exceptional piece of military history. By drawing on the numerous written accounts, as well as extensive interviews with survivors, Leigh gives a very clear and concise account of the battle, mostly told through the words of the soldiers who fought it (Admittedly almost complete from the US perspective). While Leigh carefully guides the narrative and supplies any information the reader needs, he lets the soldiers speak whenever possible, and it brings an immediacy and an authenticity to the book that is impossible in most military histories.

The book added significantly to my knowledge and understanding of the battle and has earned a permanent place in my library. It should definitely receive consideration for military history awards.

[Disclaimer: Although I no longer work on the military side of the company, I am an employee of Osprey Publishing, who published the book. Assume what bias you want, but I wouldn’t heap praise on the book unless it deserved it.]