The Lost Fleet - Beyond the Frontier: Invincible 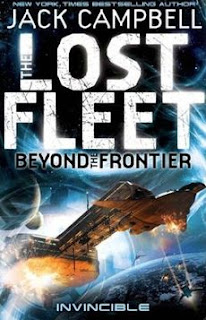 A couple of years ago, I wandered into my local Waterstones bookseller, looking for a novel involving space battles.  While battles between spaceships has long been one of my favourite topics, for some reason the idea was burning particularly hot that day. After a good thirty minutes of searching, I ended up buying two books.  One of those I have completely forgotten, the other was The Lost Fleet: Dauntless by Jack Campbell.
I devoured that book, bought the next book in the series, and devoured that too.  I can’t remember another time in my adult life when I’ve picked up a book and enjoyed it so thoroughly.  By the time I had finished the six book series, I was happy to call it my all-time favourite space adventure.  Its combination of themes drawn from the Cold War, the King Arthur myth, the highway vs. interstate development, and good old fashioned honor and humanity, connected with me in a very personal way.

Now The Lost Fleet won’t be to everyone’s taste.  The hero wears a gleaming white hat, and none of the characters are heavily developed.  But Jack Campbell is very good at coming up with interesting situations, both tactical military situations, and internal interpersonal situations that challenge the fleet from within.  He has also found a way of writing space battle involving huge fleets of ships that is easy to follow, but keeps you on the edge of your seat.

I must admit, that the last book in the series was just a bit of a letdown for me.  Campbell obviously had a lot of ideas to present to get the second series started, and I found the whole thing a bit slow.  However, with the fleet off and moving through space again, the series has regained its usual high pace.  This new book is classic Lost Fleet, with lots of new threats, lots of battles, a bit of murky politics, and enough ‘YES’ moments to more than satisfy.

So, if you like your space adventures with lots of action and a good guy who actually deserves the term, I wholeheartedly suggest The Lost Fleet.
Posted by joe5mc at 03:22