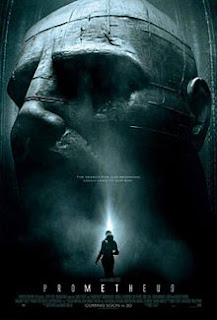 With my wife away for the day to see Coldplay in concert, I decided to go and see Prometheus by myself.  Prometheus is probably the most hyped sci-fi movie since Avatar, but after seeing the first trailer, I declared my own media blackout.  The trailer looked good, and personally, I didn’t want any spoilers. Well, I just left the theatre and sent my friend a text:

Just saw Prometheus. Disappointing. A bit dull with a lot of weak plot points. Good visuals, but that’s about it.

I think, in the end, the movie was never really sure what it was trying to accomplish, and thus becomes a weird mash-up of Mission to Mars and Aliens.  The movie starts off as a fun sci-fi exploration, though this is somewhat undermined by a strange, and mostly unlikable cast of characters. This plot is then slowly (and somewhat half-heartedly) taken over by a horror movie.

Thankfully, because the visual ascetic was so well done, I was able to enjoy the movie-going experience, but for fans of good stories, I’d give this one a miss.

Okay, here’s a few things I’ve just got to get off my chest, but if you are planning on seeing the movie, I wouldn’t read this part...

* The aliens left a message (hidden in all our ancient cultures) pointing us to a far star.  They did this by drawing a pattern of six dots all over the place.  Stargate once explained how you could use six fixed points in space to define a location.  This movie never bothers to say how six little dots explained the location of a system way across the galaxy.

*  The aliens left us the address for their bio-weapons facility...why?

* The exploration team uses a series of remote probes to map the whole of the alien complex. So how does the guy who brought the probes end up getting lost trying to get back to the ship.  Considering the ship knows where he is the whole time, didn’t anyone see he was lost?

* What is the point of Charlize Theron’s character?

* The android infects the scientist with the evil alien goo – why? No really, why? What did this have to do with his mission?

* The corporate boss who funded the mission right before he ‘died’ is actually still alive! No one saw that coming...

* ‘Why get in the escape pods. I like you guys and would love to stay on the bridge and help pilot the ship on its suicide run even though I’m not really necessary...’

* The movie IS a prequel to alien, and it sets up everything right at the end...except, the Space Jocky gets out of his chair and dies somewhere else in a totally pointless, anti-climatic scene.  SERIOUSLY – you made a movie as a prequel to another movie and mess up one of the only important pieces!

* Why does the alien at the end of the movie only sort of look like an alien?
Posted by joe5mc at 07:06