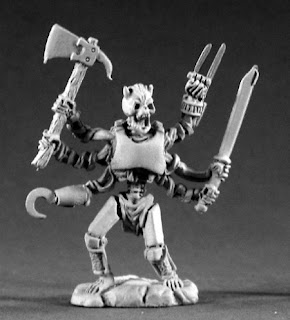 I don’t think it is any big secret that I have long been a fan of Reaper miniatures, or that their wonderful line of heroic fantasy miniatures has been one source of inspiration when working on Frostgrave.

Today, for a bit of fun, I thought I would create some stats for one of my favourite little subgroups of Reaper Miniatures, the Arachno Assassins! I remember when the first of these little eight-limbed skeletal monsters came out. I thought it was hilarious and bought one immediately. I’m glad that over the years they have slowly added new archno figures to create a small range.

These six-armed skeletons are rarely encountered in the ruins of Frostgrave, but when they are, they tend to be encountered in groups. While just as fragile as normal skeletons, their numerous arms give them a lot more offensive punch.

An archno assassin armed with a hand-weapon and carrying a standard.