Gandalf the Grey (and Blue) 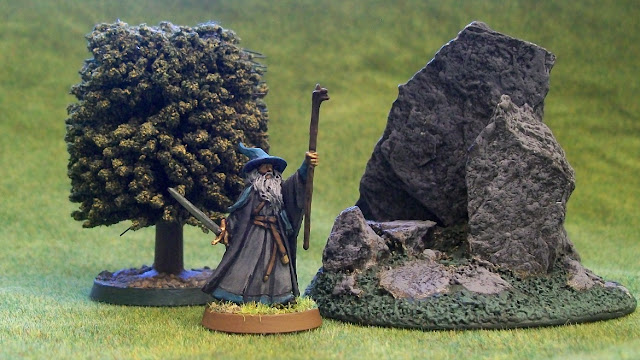 When I was about ten or twelve years old, I took my first miniature painting class. It was held in a small room in the back of the local gaming store. As I remember, the only students were me, my friend Peter, and one other guy. The teacher, whose name I have long forgotten, was a kindly middle-aged fellow, who taught me a lot of important lessons about painting miniatures (most importantly, use acrylics, not oil-based paints!).

The teacher mostly painted Middle-Earth figures from Mithril Miniatures. I asked him once if he had a complete collection. He said that he had bought every figure that they had produced, but might give up if they produced another Gandalf figure.

I wouldn't be surprised to learn that there are more unique Gandalf figures (both official and unofficial) than there are for any other character. Not only is he arguably the most recognizable and popular figure in fantastic fiction, he is the only character to play a major role in both The Hobbit and The Lord of the Rings (as well as some of the supporting material).

All of this is a long-winded way of saying that I already have several Gandalfs in my collection, and I have just painted another one! This latest one is a plastic miniature that comes from the Mines of Moria box set. Unlike most of the other Gandalfs in the Games Workshop line, this one was not based on the movie version...or at least it isn't based on Ian McKellen. Still it is a wonderful sculpt and a really nice pose, and I thoroughly enjoyed painting it.

Since I already have several Gandalf the Greys in my collection, I decided to paint this one slightly differently. This time I gave him blue trim around his robes, which I think works pretty well, and matches the blue hat he is said to have in The Hobbit. I also made his scarf blue as well (said to be silver in the book). Even Gandalf must have gone through a few robes in his 3,000 years or so of wandering Middle-Earth!
Posted by joe5mc at 04:03