My Name is Dzozefs A. Makalo! 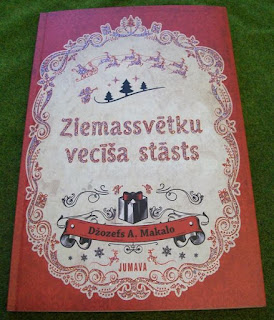 Or so it apparently is in Latvian!

A few years ago, I wrote a short book entitled The Story of Santa Claus, which, rather unsurprisingly, tells the story of Santa Claus and how he went from a Turkish Saint to a sleigh-riding, present-producing Christmas spirit beloved by children the world over. The book did pretty well when it came out, selling around 5,000 copies between the UK and USA.

Last year, the book was translated into Japanese, which I wouldn't have thought was an obvious market for the book.

This year, it has been translated into Latvian! I must admit the closest I've ever come to Latvia was a short holiday in Estonia, but it's still kind of a thrill. The language is so far from anything I recognize, that I had to use Google Translator to see if they had changed the title (apparently not).

I think my favourite thing about this book though is that they translated my name on the cover. I have been translated as Dzozefs A. Makalo. I suspect that Joseph is in pretty common usage in Latvia, but I wonder if McCullough gave them a challenge? If I said 'Makalo' with my southern US pronunciation, it wouldn't sound a thing like my name. (In fairness, I've heard Scots say the name and it doesn't sound much like how I pronounce it, so there is a question about who is right here). I'd love to hear a Latvian say it.

Anyway, for anyone who might be interested in the book, in English, you can still buy it from Amazon.
Posted by joe5mc at 01:45