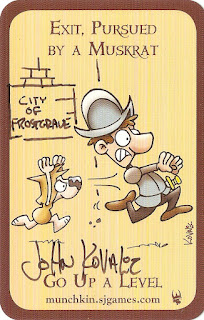 This goes under 'Great Geek Moments'!

This past weekend, I was in London for Dragonmeet, a small, but growing role-playing convention. I was helping out on the Osprey Games stand, and chatting to people about Frostgrave and Ghost Archipelago. Over the public address system, I heard that John Kavolic was signing on the upper floor.  For those not in the know, John Kavolic is one of the best-known and most-popular game artist around, thanks in large part to his illustrations for the mega-best-selling Munchkin and its 937 (or thereabouts) sequels. That said, for me, John will always, first and foremost, be the creator of The Dork Tower. This comic came along just when I needed it. I have a nearly complete run of the comic book, and am seriously glad that it has continued as a web-comic. A few months ago, I traded a couple of tweets with John about Frostgrave!

Later in the show, I was passing by and saw there were only a couple of people left in line, waiting to get signatures from John (he had, at that point be signing for several hours). I figured I'd never have a better chance to say hello, so I jumped in line. When my turn came, I said hello and, somewhat sheepishly, introduced myself as 'Joe, the guy who wrote Frostgrave'. John immediately leaned over, took a Frostgrave wizard sheet out of his bag and said, 'Can you sign this?'.

Taken aback, I protested that this is not how this whole thing was supposed to work. He was supposed to be signing something for me! Though, at that moment, I realized I had nothing for him to sign, because I hadn't really expected this encounter to happen. In the end, we made a trade. I signed his wizard sheet, and he signed a Munchkin card for me, even embellishing it with a little Frostgrave sign.

I didn't want to take up much of his time, as the line had grown again behind me, and I needed to get back to the stand, but what a wonderful experience. I would later learn, via twitter, that John bought the copy of Ghost Archipelago that Osprey Games had donated to the Dragonmeet charity auction!

I'd also like to take a moment and send a big Thank You to the great guys from the HATE (Hackney Area Tabletop Enthusiasts) gaming club, who spent all day running a really sharp looking Ghost Archipelago demo. I stopped by a couple of times and everyone seemed to be having a lot of fun, which is the point, after all.

What a day! I managed to escape only buying one book, a personal record. I'm sure I'll talk more about that later.
Posted by joe5mc at 04:36