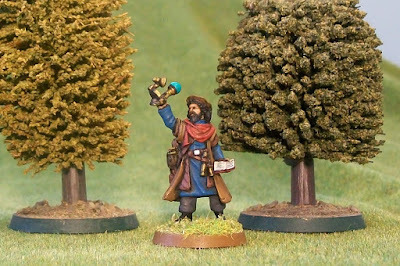 I had so much fun painting my new Frostgrave warband at the end of last year, I thought I would try to do it again – this time for Ghost Archipelago. I have yet to decide on most of the figures I will use, but I knew from the beginning that I wanted this one.

This is actually a Frostgrave: Astromancer figure. He is basically a magical astronomer. However, because he’s holding up that astrolabe-like device, he also has something of the navigator about him. It is easy to see him standing in the prow of a ship, plotting its position and course in a dark sea. 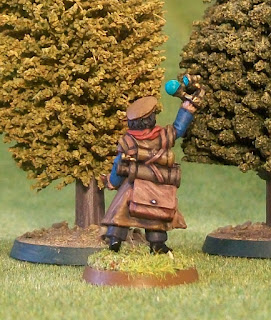 There is a lot of detail on the figure, which made it both challenging and fun to paint. A lot of that detail is on his back, where he’s carrying a load of equipment, including a huge, cased, telescope.

In game terms, I’ll start by using him as a standard crewman, since he doesn’t map well onto any of the standard soldiers. However, once my warband reaches higher levels, I’m going to come up with some rules for a ‘Stargazer’ legendary soldier and give him some cool special powers or abilities.

For now though, he becomes the first member of my new crew! Ideally, I’ll have the new crew done in time to take to Adepticon, but it is going to a busy few months, and I don’t know if that is going to happen. We’ll see.