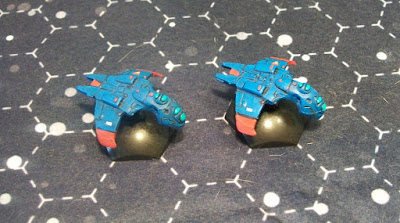 I recently uncovered a box of Silent Death fighters that I had forgotten. While Silent Death isn’t one of my ‘5 Projects’, I decided that I could use them as my time-filler figures.

Generally, I like to paint one figure at a time, so that I can really focus and enjoy working on it. This system works fine, most of the time, except when I put a heavy wash on something. Then, I often have to wait upwards of ten minutes while the wash dries. In those times, I like to have a few time-filler figures. For these, I like figures that are quick-to-paint and that don’t have too much detail or complex paint schemes, so Silent Death fighters work perfectly.

Since I have recently been painting my ‘wash-heavy’ Nazgul, I’ve had more time that usual for these time-fillers, and have actually managed to finish up a pair of them.

Among fans of Silent Death, the Epping is a legendary ship. It’s basically a missile boat, with a crew of four and three, devastating, missile launchers. When the game was first released, it was one of the scariest ships in the game, and even years later, with loads of power-creep, it’s still a dangerous opponent. The first version of the Epping figure was extremely ungainly and ugly. While I doubt anyone would call this new design ‘lovely’, it is a vast improvement. 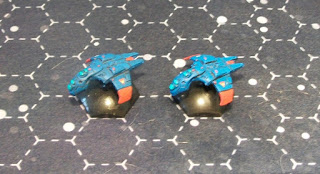 I painted these guys up as part of my ‘Fire Hawks’ Legion, and they’re sporting the decals as can sort of be seen in the blurry photo here. I also found some tiny little numbers in my decal collection (not sure where they are from) that I put on their other wings. So these are Eppings 100 and 102. The decals not only add some great little detail, but will be useful for identification purposes during a game. Assuming I can read those tiny numbers.

I mounted these guys on cut-down flight bases. Personally, I hate the standard gaming flight stand which is something like 3” tall. It makes no particular sense when playing on a two-dimensional board and, because they are so heavily top-weighted, they fall over all the time, potentially chipping the paint! It also makes them hard to store when not in use. So, I just cut the tops off the stand and glued the top straight into the base. I think it works much better.

So, I’ll prime up another couple which will sit on my painting deck, awaiting the washes to come.

These figures can be purchased here.
Posted by joe5mc at 03:50