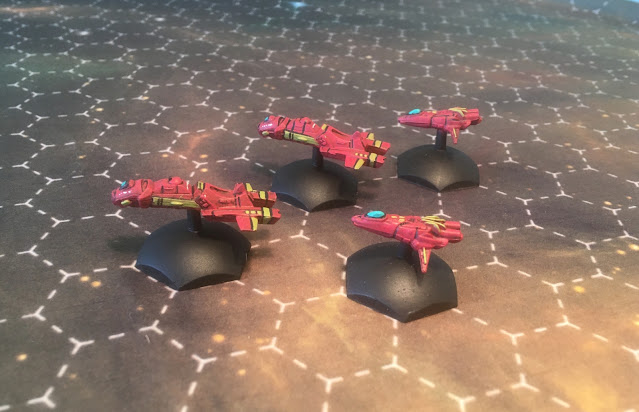 I am continuing work on my Silent Death project. Up to now, I have been mostly painting ships at random, but I have decided that I will focus my goal on collecting the fighters that were released for the first edition of the game*. So, the fighters presented in the original rulebook, and the two expansions Overkill and Black Guard**. This includes a total of 24 different fighters and gunships, which seems like more than enough to get started on, especially since I'm painting up two sides. I'm going to knock up a spreadsheet to see exactly how many of each I want.

This week, the red team gained some new forces, a pair of Drakar gunships and two Dart light fighters. The Drakars are metal, while the Darts are plastic. The difference in quality is noticeable, but not so much that it is likely to bother me on the table.

I really enjoy painting these fighters as breaks between other projects, because they are quick and easy. 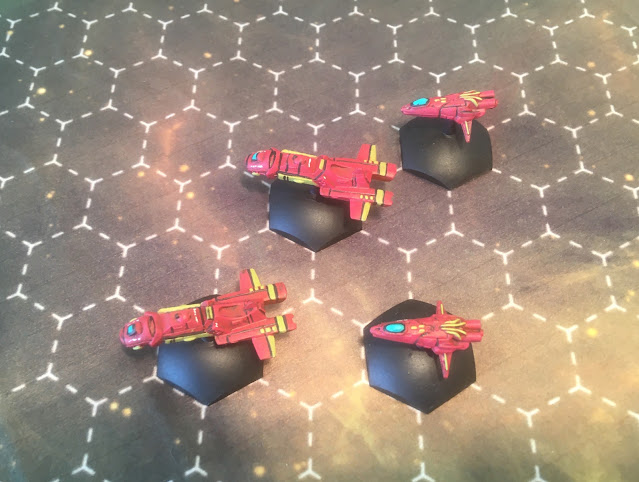 * The physical appearance of many of the fighters changed between 1st and 2nd edition (which is actually the biggest difference in the editions). I'm just using whichever design I like better or happen to have.

** The first edition of Silent Death also saw the release of the Night Brood box set, which introduced alien 'bug' ships. I have this box, and would like to add those forces someday, but it is beyond the scope of my project at the moment.