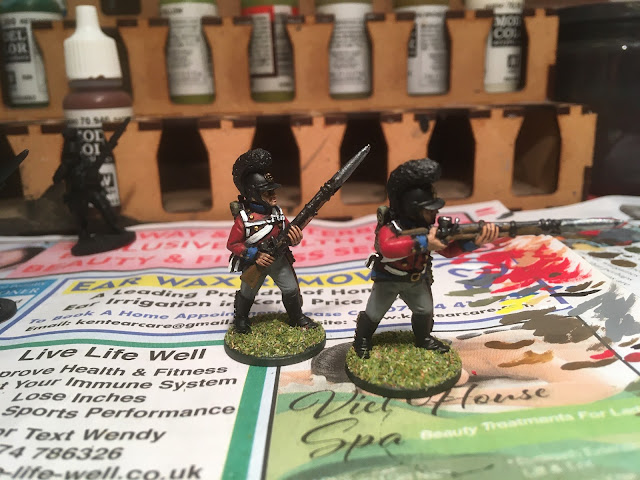 As this year limps toward a close, I must admit, I'm feeling a kind of gamer angst - a pent up energy that should have been used rolling dice, pushing around figures, and hanging out with friends. Since that doesn't look like it is going to change in the near future, I've had to take a different approach. Instead, I've decided its time to start a new army!

Now, the decision on which army was greatly influenced by my desire to do something that is completely unrelated to my work. After much thinking, I decided I would begin work on a faux-Napoleonic army! By which I mean, I'm going to use Napoleonic figures, but I'm not trying to construct a historical force. Instead, I plan to create my own country for them. In wargaming, this is sometimes called an Imagi-Nation, although those are still normally placed within a historical context, where mine is going to sit outside of any specific context. Basically, I just want to paint up a big force of cool looking toy soldiers that I can use for any number of games. In the future, I hope to see these guys taking on other Napoleonic-esque foes, gunning down zombies, and fighting aliens on far flung worlds. Basically, I want to just have fun with it, and not worry too much about what they are 'for'.

I've decided this will be my big project for 2021 (though I'm getting an early start). My goal is to complete at least 8 units by the end of next year. At the moment, I plan on:

3 Units of Infantry (16 figures each)

2 Units of Cavalry (8 Figures each)

It's a big ask, but I'm giving myself plenty of time! Nor am I above changing that alignment as I go along. In fact, I've already changed it once.

My plan is to use mostly Front Rank figures. These have a lot of advantages for me over other manufacturers. They are all metal. They are sized a bit bigger than most, making them easier on the eyes. They all fit on penny bases, and, perhaps best of all, all of the figures can be bought individually. They are also just really nice.

As you can see from the photo, I've already gotten started on the first unit. I'll provide some better photos soon.

This project isn't just about painting minis though. While the army isn't a true Napoleonic force, I am also planning on doing a lot of Napoleonic warfare reading this year. To begin, I have obtained a copy of The Campaigns of Napoleon (in 3 volumes)!

Also, to gear myself for this big project, I re-read Dave Taylor's Armies & Legions & Hordes, which is all about tackling big miniature projects.