Searching for Giants around Copenhagen

My family recently returned from (another) trip to Denmark & Sweden. It hadn’t been a plan to return this soon… it just kind of happened. We flew into Copenhagen, and my wife immediately took the kids on the train into Sweden to see her sister, while I spent a couple of days on my own in the capital of Denmark. I found a cheapish hotel with pint-sized rooms, but containing everything I needed.

I spent my first day visiting Copenhagen’s numerous ‘geek shops’. I’ve mentioned the gaming stores before – and this time I got to thoroughly explore them and even have a few chats with the employees. It happened to be Free RPG day, so I picked up a few those, along with a big stack of used GURPS books, and a few paints. I also went to the Fantask bookshop, which is devoted to fantasy/sci-fi. Of course, I also went to the LEGO store, because you just kind of have to…

By the second day, I was a bit tired of the city crowds and felt the need to stretch my legs. So, I rented a bike from the hotel, and set off in search of ‘The Forgotten Giants of Copenhagen’ – a series of six wooden sculptures of giants by the artist Thomas Dambo, hidden in natural beauty spots outside of the city. My attempts to buy a decent map of the area the previous day had been thwarted, so I was relying on a few scribbled maps I made from the internet and (mostly) my phone.


I left the hotel at 7AM, long before most Danes are awake, but got off to a slow start. The bike I hired, which is really for toodling around the city, was heavy and slow. To break, I had to push the pedals backwards, which isn’t something I’ve done on a bike since I was a child. After awhile though, I got the hang of it. My journey began on the long, and mostly dull roads out of town. The only point of interest here is that every road had wide, raised, cycle lanes running next to them, so I was never in traffic, which made it much more pleasant than many cycles in Britain. I took a slightly longer route than was necessary, because I wanted to hug the coastline, which soon afforded me fantastic views both of the Baltic Sea and the city as it receded behind me.

I passed a few other cyclists, and a jogger or two, but mostly I was alone, as I left the roads and continued over well-maintained cycle tracks. I had to frequently check my phone to ensure I was going the right direction… in truth, I have a very poor sense of direction and get lost easily. After about an hour, I had left all traces of the city behind, and rolled through lovely parkland near the shore, seeing lots of little islands and fancy boats. 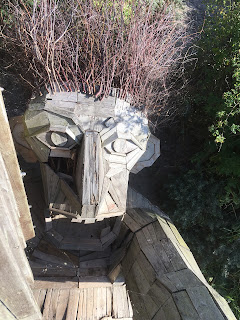 About 90 minutes after I left the hotel, I caught my first sight of a giant… well, actually what I saw was a strange knobbly bit of wood surrounding the railing of a bridge. As I got off the bike and walked up, I could see this was a hand. Leaning over the side, I looked right down on the face of the first giant (Oscar under the Bridge). Nearby, a little path led down to the giant, and I spent some time with him while having a cereal bar.

Back on my bike, a short time later, I headed inland, on a path that ran through rolling, well-maintained land. For one moment, I thought I might have to abandoned my quest, as the path was blocked by a series of ribbons. It turned out this was just a warning, as some kind of equestrian event was getting underway. After a few horsemen and women thundered by, a woman raised the ribbon and let me pass on. Soon I rolled through a nice suburb, on quite cycle paths, before shooting out into another park.

This park contained a long cycle path that ran all the way around a lake. I got slightly lost here, but soon realized I had to go off the main path, into a small woods in order to find my second giant – Little Tilde.

What is perhaps most amazing about these giants is that despite their size, neither could be easily seen until you were right on top of them. Perhaps those stories of bigfoot and trolls are more believable than I thought! 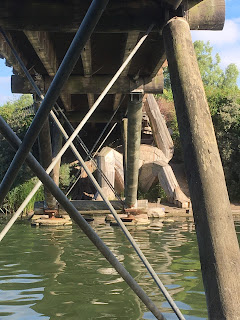 I really wanted to carry on – there was a third giant very close by – but my phone was now on 11% battery, and I had no way of recharging on the go (a major oversight that will be rectified in the future). Without the phone, I didn’t like my chances of finding my way home, and, in truth, I had been cycling for nearly three hours on that heavy bike and decided it was best not to push it. Nothing wrong with leaving something fun to do next time!

The way back to the hotel wasn’t near as nice as the journey out, as I took the most direct way along the road – but again, there was a nice cycle path all the way, and the roads weren’t generally busy anyway. I did see a giant hare on the trip back, though he eluded my attempt to photograph him.

I arrived back at the hotel about 4.5 hours after I set out, having covered a bit over 27 miles. I must admit, I was rather tired. In a stroke of luck, the route back had revealed that my hotel was right near a movie theatre, which I hadn’t know. So, that afternoon, too tired to do much else, I went to see Thor: Love and Thunder (subtitled in Danish). I thoroughly enjoy it! It’s a strange mix of silly and serious, but it works.

The next morning, I hopped a train and headed up to Sweden to meet-up with my family! 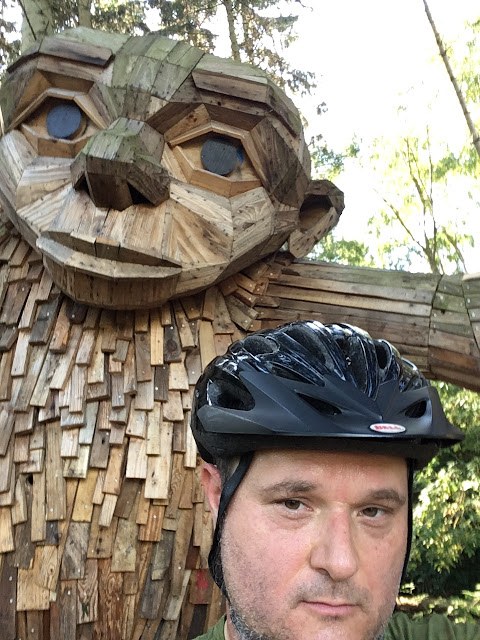