The other day my son came into my office and asked me a question about the 'Goose Guys' on my shelf, and I realized it has been awhile since I showed off my progress on my Dol Amroth army. I have slowly been adding figures to it over the last 6 months. I'm still a long way from where I want to be, but I have made progress.

As can be seen, the army currently consists of: 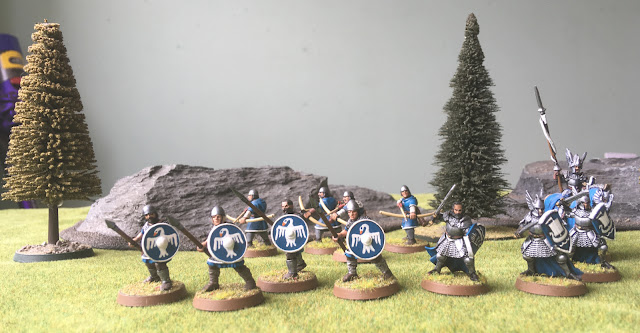 So, 21 figures in total. Not bad. My first goal is to bring the swordsmen, spearmen, and archers up to 8 men each. That way they can take the place of a standard 'Gondor' force as seen in some many Middle-Earth SBG scenarios. I then want to increase all three of those units to 12 men each and bring the mounted force up to 6 to serve as my army for Lion Rampant. Eventually, I want to have enough to use for Oathmark.

I am talking with a some friends about doing some 'extended format' Battle Companies games that would allow me to get some of the guys some early experience.