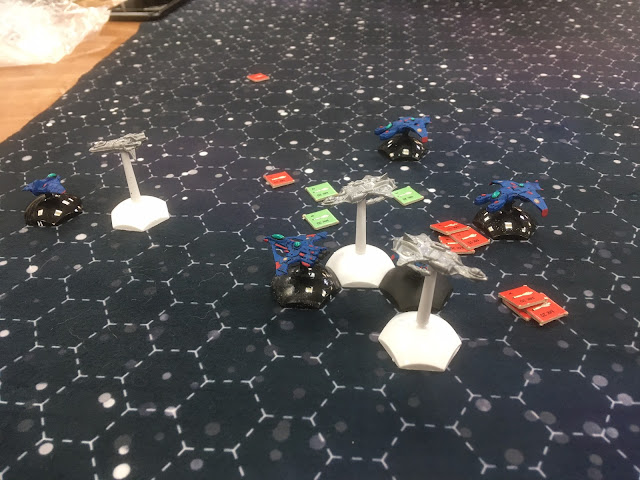 Last night I went to the local gaming store for a bit of Silent Death action! For a long time now (seriously, nearly 30 years), I've been wanting to play through the Ptolemean Wars campaign - the very first supplemental campaign created for the game (contained in two, long out of print and unavailable books). Having found a friend who is also interested in the game, we decided to give it ago. Last night, we played through the first two scenarios, completing both in less than 3 hours - speed is a strength of the game.

Now, honestly, despite planning the games for over three weeks, neither of us were fully prepared. I thought I was going to have a new flight of fighters painted up, and maybe even a bit of space junk terrain. Instead, I had no terrain and had to use old fighters models that don't actually match the ones used in the scenarios. My opponent, on the other hand, couldn't even find his painted ships and had to go unpainted! We both vowed to do better next time! 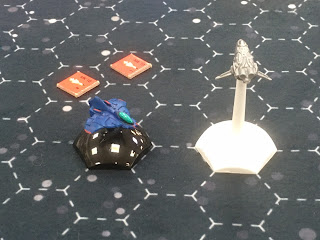 The games were a heap o' fun. The first was played in stages, where we both started with a small force and received reinforcements a few turns later. Torpedoes flew everywhere, but it was cannons that did the most damage. In the end, my invading forces had wiped out the defending force, losing only one man in the process.

The second game was smaller, with just two fighters a side, but no less entertaining. This time, it was torpedoes that won the day, as both of my fighters suffered heavy strikes and became easy prey.

So, one victory, one loss, and a great evening's gaming. That's 2 scenarios down, with 10 to go in the first book! 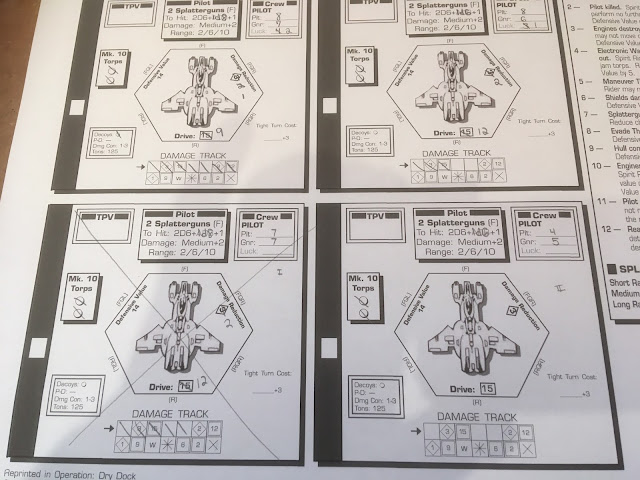