Doctor Who: Creatures of Beauty 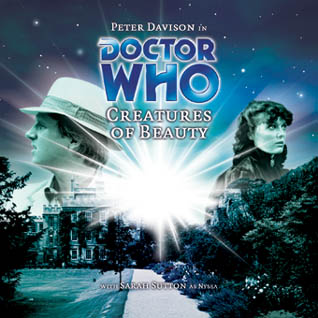 For over a dozen years, Big Finish Productions has been producing Doctor Who audio plays. Engaging the help of all of the living actors to play the Doctor from the original series, they have created over two hundred new adventures for the Doctor and his companions.  In my opinion, these plays have been the highest quality Doctor Who ever produced.  With their complicated, adult plots, unbound by the need for expensive visual effects, these stories have taken the Doctor on some truly fantastic adventures.  I really can’t recommend Big Finish highly enough.

Unfortunately, the latest title I’ve added to my collection doesn’t merit the same level of praise.  Doctor Who 44: Creatures of Beauty stars Peter Davidson and Sarah Sutton, a team that has produced good work in the past, and there is nothing to fault their performances here.  Instead, it is the script that lets everyone down.

The story dives right into the action.  Or, perhaps more accurately, the action dives right into the story.  For the first ten or fifteen minutes, I really had no idea what was going on.  I even wondered if I had perhaps put in the wrong CD by accident.  Eventually, I realized that the story wasn’t being told in chronological order, instead the narrative was skipping around in time.

This is not the first time I’ve encountered such a narrative device, and I’ve got to admit, it always makes me sceptical.  There are (perhaps) legitimate reasons to tell a story in this fashion, but they are few and far between.  Instead, I find that such a technique is usually employed to cover up a lack of plot, and that, I fear, is the case with Creatures of Beauty.  If you actually laid out the plot of this play chronologically, it would quickly becomes apparent how little actually occurs.  Even more damning, it would also become obvious that neither the Doctor, nor his companion, do anything of significance within the story. This is actually pointed out by the Doctor himself towards the end of the play, right before a meaningless and rather obvious twist, fails to save the story.

While I will happily add this CD to my ever growing collection of Doctor Who audios, I highly doubt I will ever listen to it again.
Posted by joe5mc at 13:19

Email ThisBlogThis!Share to TwitterShare to FacebookShare to Pinterest
Labels: Big Finish, Doctor Who