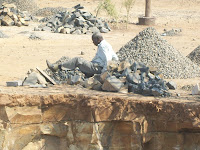 The old man sat on the dusty ground, a pile of broken stones between his outstretched legs. All around him, tall piles of gravel cast stunted shadows from the noon day sun, silently waiting for a buyer with a wheelbarrow to come and haul them away.  My wife crouched down, and asked the man his name and how long he had worked at the quarry.  In his slow, heavily-accented English, he said that his name was Joseph, the same as mine, and he’d worked here for the last nine years, breaking apart rocks with a small hammer.  He was sixty-five, an age at which many of us hope to retire, and he looked as tired and worn out as the frayed clothes he wore.  Still, he spoke with a smile, and his eyes gleamed as he passed his hammer to my wife, so she could have a try at breaking the stones.
This was Livingstone Quarry, on the outskirts of Livingstone, Zambia, a town best known in the Western world for its proximity to Victoria Falls.  Few tourists came here though, just poor Zambians, hoping to make enough money to survive by tearing rocks from the ground, breaking them into gravel, and selling the gravel to builders for $1 per wheelbarrow load.  I gazed around the shattered landscape, marvelling at a world I had never seen before, never really imagined. Down below, a man with a sledge hammer pounded against a rock wall, breaking stones free.  Then he grabbed the large stones and hurled them twenty feet above his head, up onto the lip of the quarry pit.  Nearby, a group of children carried a larger cooler amongst the workers, selling individual ice-cubes as a source of refreshment.


My wife thanked Joseph for his time, and we walked on.  The workers glanced at us with little curiosity, a pair of ‘rich’ tourists, invading their place of work.  In the distance we could see the tractors and machines of the newly opened private quarry that threatened to steal what little money these people could earn.  Close by, two teenage boys, possibly brothers, banged away at their own pile of rocks. Perhaps they were helping their families, trying to earn money during the school holidays, maybe they needed the money to pay for school, or maybe school was just a dream for them, and this was the beginning of their working life. I didn’t have the courage to ask.

As we turned to leave the quarry, we passed a middle-aged woman in a flower-printed dress, sitting on the ground, singing happily to herself as she smashed stones with a heavy, iron weight.

The woman smiled up at us, as she pulverized another rock.  ‘I love my job’, she said. 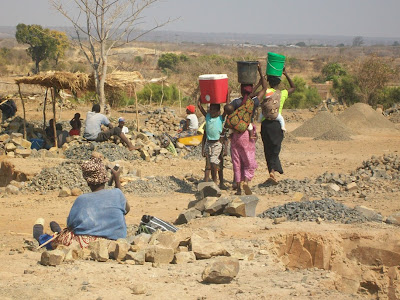