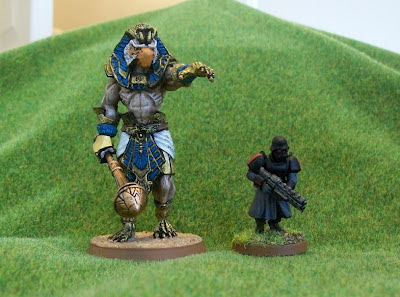 Over the last couple of decades of miniature painting, I have tried out lots of different sizes and scale of miniatures, but I always come back to 28mm.  Not only do I find it the most ascetically pleasing size of miniature, but also the most enjoyable to paint.  That said, occasionally a ‘28mm’ miniature depicts something so large or so small, that it is essentially like painting a miniature in another scale.  Such is the case with this week’s miniature.

I can’t remember the official name of this miniature, but it comes from Reaper, and I purchased it at the Troll’s Cave in London.  I have no specific need or use for it, but it caught my eye, and it will make a nice center piece should I ever do any kind of Egyptian warband.

It actually sat on my lead pile for quite some time before I worked up the nerve to tackle it.  Not only is such a large figure quite an undertaking, but it also requires slightly different painting techniques.  Essentially, the larger a miniature gets, the more subtle the shading and blending of the colours needs to be in order to achieve a realistic finish.  As most of my practice has been done on smaller miniatures, I wasn’t sure how I would cope with such a beast.

I use a lot of black-lining in my miniatures, and it perhaps came out a little too harsh in some areas of this one, where it is separating light colours.  Also, it would have been nice to get a subtler shading effect on the skin tone.  Neither of things are as noticeable on the actual figure as they are in the photograph.  Of course, neither is the nice subtle blending I managed on the beak.

All and all, I’m pretty happy with how my Egyptian avatar turned out, and he looks pretty darn menacing looming over the puny ‘normal sized’ 28mm miniatures.
Posted by joe5mc at 16:00