Back on the Bike

Just over three months after I flipped over my handlebars and cracked my collar bone, I got back on a bike. It was just a short-ride: about 2.5 miles down to the science-park, around the duck pond a few times, and back home, but it felt good. 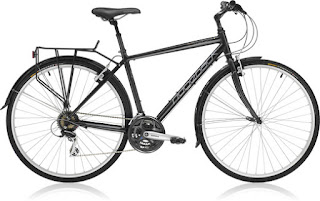 I admit I had a few moments of jitters, but they passed quickly, and were soon lost in the resistance of the pedals and the rhythm of the wheels. I had hoped to get a few more short rides in before making the long ride to work, but life and weather conspired against it.

I spent the first part of this evening getting my bike ready for the commute.  Amazingly, the only part of my bike that seems to have suffered any major damage in the crash was the bell, which lost its hammer. I replaced that. I also fitted a new ‘Lezyne Mini Drive’ light. This little sucker throws out some serious lumens and has to be recharged through my computer.

So, assuming it isn’t pouring down rain when I wake up tomorrow, I’ll be saddling up the Ridgeback Meteor, and rolling on to work!