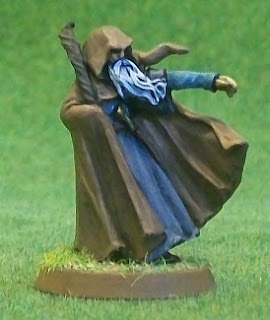 - I've been playing around with the look of the Troll.  I decided it was time to give it a slightly more 'Renaissancey' look. At the same time, I wanted to make it a little easier to read and increase the size of the main body column so that I could display pictures a bit larger. What do you think?

- I missed Miniature Friday, so here's a little shot of 'Sharky'.  In my humble opinion, this figure is one of the best sculpts in Games Workshop's Lord of the Rings line. True, I think this little guy looks a little too cool to be 'Sharky', but instead, looks more like a classic depiction of Merlin. Either way, it's an amazing little figure and huge fun to paint.

- My last post, about sci-fi universes, has just gotten its 500th hit, making it the Troll's most popular blog. It generated a good bit of debate on a couple of forums, with people pointing out several universes that should probably be considered. There were two that really caught my interest: Perry Rhodan, a German sci-fi pulp/paperback series that is still running after 2,700 issues and Mobile Suite Gundam, a Japanese giant robot series has produced a huge slew of movies and television and is also still active.

It helped highlight how difficult it is to compare such things across cultures. As it turned out, the most controversial inclusion on my own list was Doctor Who. In Britain, Doctor Who is better known that Star Wars and Star Trek put together. In the US, it's probably on a par with Babylon 5.

- My post on the Space Battleship Yamato model has became a huge target for spam commentators. While I'm used to getting a spam comment every couple of weeks, this post has gotten about 8 in the last two weeks. I have no idea why this might be.

- The Thames has once again risen to the top of her banks. With more rain expected over the weekend, I suspect that at least some parts of Oxford will be underwater. Thankfully, we live on a hill.

Email ThisBlogThis!Share to TwitterShare to FacebookShare to Pinterest
Labels: Lord of the Rings, Quick Thoughts, Sharky