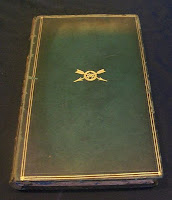 Many months ago, I bought a beautiful book. I bought it from a little shop in Folkestone for £15, and, I admit, I bought it mainly because it was beautiful.  That said, I always intended to read it, and now I have done so.

The book in question is The Life of King Alfred by Dr. Reinhold Pauli. It was published in London in 1852 by Richard Bentley of New Burlington Street*. The book is bound in green leather, with gold embossing on the cover, spine, back cover, and even the edges of the cover. The page edges are inked in strange swirling colours. It also has a ribbon, a sign of distinction among books.

On the inside front cover there is a very intriguing book plate, which I cannot fully understand.  It seems to say ‘Alfredo Puter, Harrouiensi Diligentiae Praemium Advidicavit (handwritten name) Praeceptor (handwritten name) A. S. MDCCCLIX'.  Okay – my Latin isn’t the best, and it isn’t helped by the font seeming to use the same character for both ‘v’ and ‘u’, but, as near as I can tell this book was awarded to a student, probably Alfredo Puter by his teacher in 1859. If someone with better Latin could make confirm or correct me, I’d certainly be interested.

It’s also interesting to note that the symbol on the bookplate is the same as the one embossed on the cover, which leads me to believe that the book was originally sold unbound (as was common at the time) and that the cover and binding was added by whomever purchased the book to use it as a prize.

So what of the text? The text is written by a German academic who studied in Oxford in the 1840s. He originally wrote the book in German, where I assume it was also published, and then translated to book into the English. Most of the book is a rather straightforward retelling of the life of King Alfred, and from what little knowledge I posses on the subject, I think most of it is still pretty accurate (unfortunately, there haven’t been any major finds in the last 150 years, that would dramatically alter the known chronology of the period). I was delighted to find, that despite its age, the text was generally easy to read and not overly academic.

There are a few peculiarities.  The author does seem totally infatuated with his subject, who takes our lack of knowledge of Alfred having any defects as defacto proof that he had no defects. He is also delights in point out that, as a Saxon, Alfred was basically German, which probably suited his original audience. However, my favourite quirk of the text is the occasional footnotes by the editor, where he actually corrects the author on a point or two.  Can you image that in a modern work?  The editor butting in to say – actually he’s wrong about that...

All in all, it is an interesting work contained in a beautiful book, and I’m glad to be able to put it on my shelf.

* Richard Bentley, it turns out, was a rather famous publisher of the time, and worked with a lot of the big name authors of the period, including Charles Dickens, who he apparently couldn’t get along with. The Life of King Alfred was published during a period when Bentley was suffering a series of bad financial reverses.
Posted by joe5mc at 04:03