Get to the Transporter! 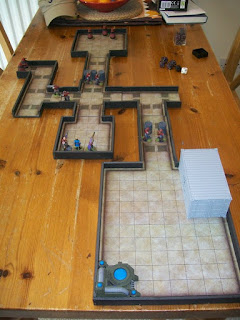 For the last couple of days, I’ve been constructing a new Space Hulk. After a lot of deliberation, I decided I didn’t want to invest a lot of money in it. So, I printed out some floor tiles from the old Guncrawl game, mounted them on foam board, and gave each tile a 15mm wall. I wanted to give the impression of a wall, but I didn’t want the walls to get in the way of actually moving miniatures.

While my cuts and measurements aren’t perfect, and I don’t have a means of actually connecting the pieces to one another, it seems to work well enough if I’m careful. So, after a couple of construction sessions, I thought I had just enough pieces to give it a test run in a short game...

General Charbon had been making a surprise inspection of the small military research facility in the Trylan system. As his corvette was pulling away from the planet after a successful inspection, the ship was ambushed by a Dalek cruiser. The Daleks quickly disabled the corvette and launched boarders.  With the primary transporters damaged, a squad from the 109th Inquisitorial Regiment rushed General Charbon towards the small cargo transporter at the rear of the ship, but the Dalek’s were closing in...

Using a modified version of the Starship Troopers rules, I set out to see how many of the poor humans would escape the Dalek attack. In a real surprise, one member of the 109th managed a lucky shot on the first turn, blasting a Dalek to pieces and drawing first blood. 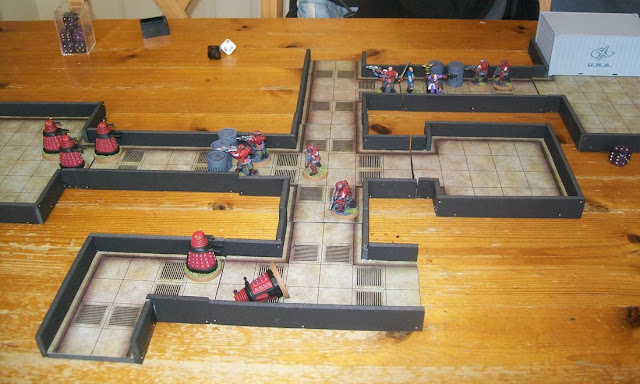 However, from there things didn’t go so well. The main Dalek assault crashed through the first barricade with little difficulty. Although the troopers fell back, they were caught in a crossfire in the corridor behind. Three troopers fell to the Dalek death rays. But their sacrifice had bought enough time for the General to reach the transporter and beam down to the planet. 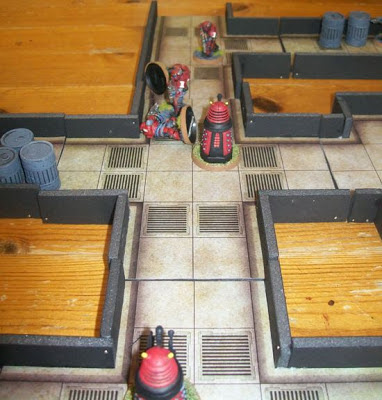 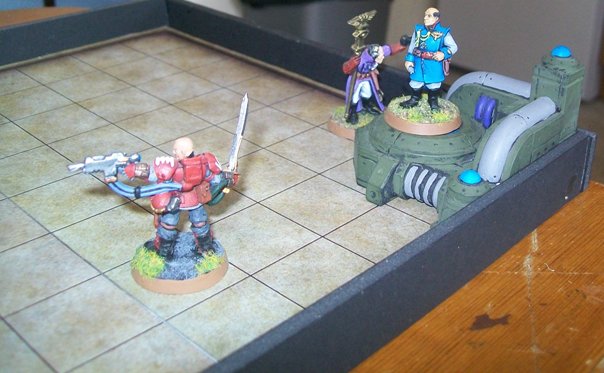 As the Daleks rounded the corner to the cargo hold, they came up against the trooper's last line of defence.  Here a second Dalek finally fell to concentrated laser fire. After the squad psyker also beamed to safety, the sergeant ordered his mean to fall back. One trooper made it to the transporter, and beamed to safety, but two more fell to Dalek fire. 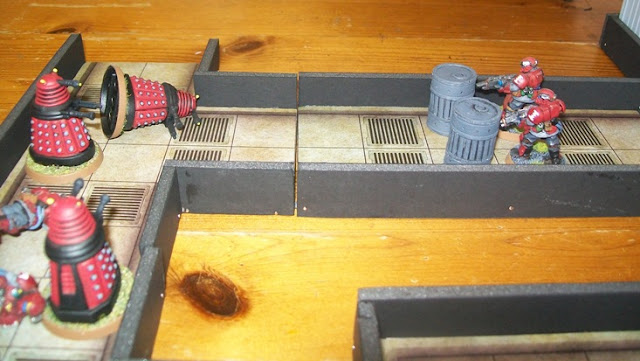 The game ended with the sergeant, the only man left alive on the ship, jumping onto the transporter pad and exchanging fire with the Dalek’s as he transported out. 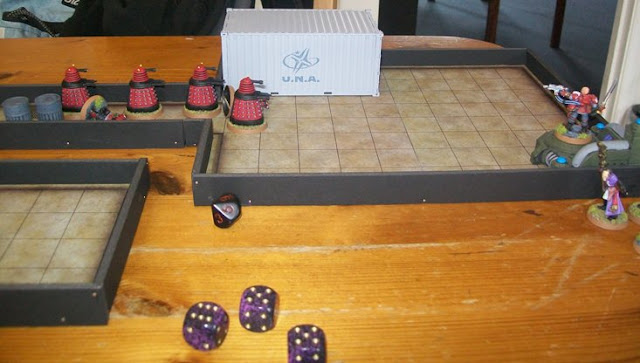 Although five troopers had fallen during the defense of the ship, they had allowed the General, and three other’s to beam to safety. They had also taken out two Daleks during the fight.

Down on the planet, the General sends out a distress call, but will any help arrive before the Dalek’s land?
Posted by joe5mc at 10:43