For awhile now, I’ve been researching the miniature market, trying to find figures to construct a kind of generic science-fiction force.  After a lot of consideration, I’ve finely done a bit of painting, and can present the first couple of figures for my new United Earth Defence Force. 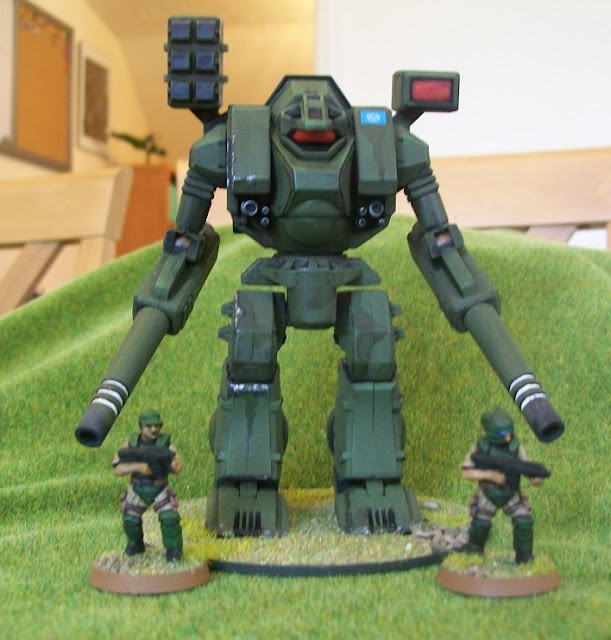 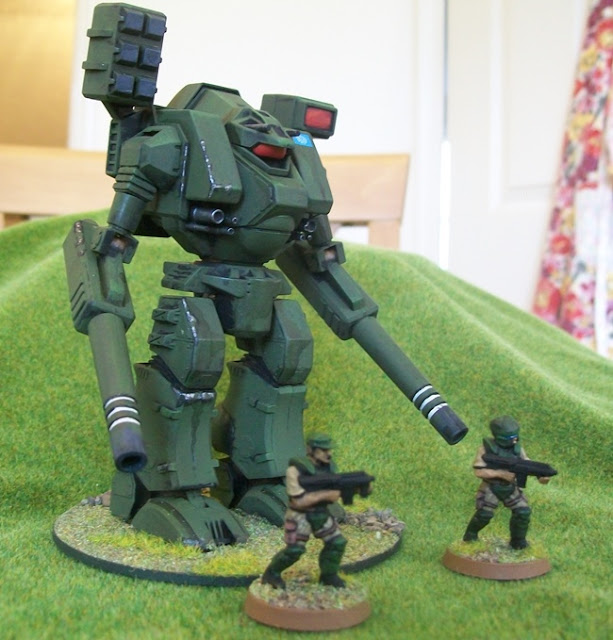 Despite wanting to include some big battle robot models, I wanted the force to have an old-school science fiction look, the kind of hard-edged, chunky science-fiction from the seventies and eighties. The big guy here is a Robotech model, which I ordered from Hobby Link Japan. It only cost about £5, wasn’t too difficult to assemble, and is just tough enough that I have no fear in using it as a wargaming piece. I tried to paint it with a grubby, battle worn appearance. This is the first time I’ve attempt to paint scarred metal – that is edges where the paint has scrapped away, leaving bare metal underneath. I still need some practice on this, but it came out pretty well. I also splattered black wash randomly over the model, to give it the dirty, low-tech kind of look I'm going for. I figure it is actually a mech, with a single pilot inside. 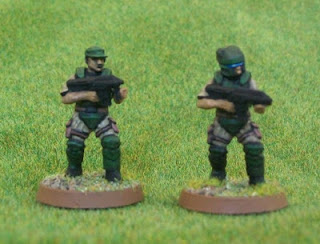 The two soldiers are marines from Defiance Games.  I’ve got a bit of a love-hate relationship going on with these figures. I love the ascetic of these figs, which seems to be drawn from the film Aliens. They are simple, uncomplicated plastic figures that weren’t too difficult to assemble. On the flip side, the detailing on them is very soft, by which I mean that the edges on the detail tend to be rounded and flow into the main body of the figure. This makes it hard to pick out the details, especially for someone like me, who likes to use black-lining between figure elements. The other issue is that there really are a very limited number of different figure poses you can make without doing some difficult conversions or bringing in pieces from other sets.

All of that said, looks wise, they were exactly what I was seeking, and I plan on painting a full platoon at some point. I think I might repaint the soldier’s visor read to match the mech.
Posted by joe5mc at 03:20