And now for something rather silly. Responding to a challenge set by my friend Phil, I present the starting line-up for the Greeks in their big show-down versus Troy.

1. Little Ajax (CF). A true speedster, Ajax can cover a lot of ground in center. That same speed should also lead to a high on-base percentage. A tad on the arrogant side, his mouth could get him in real trouble one day. 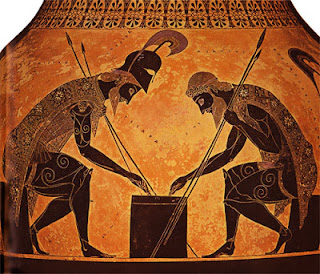 2. Diomedes (3B).  Despite his youth, Diomedes is already a veteran.  His skill and in-game smarts make him the perfect number two-hitter, who can be counted on to hit the ball to the right side  to advance a runner or lay down a bunt when necessary.  Also, his calm demeanour should prove an asset while playing the hot corner.  This guy has a very bright future.

3. Achilles (P).  Let’s face it, this guy is Cy Young and Ted Williams rolled into one.  On the mound he is (almost) unhittable, while at the plate he’s got the sweetest swing of the ancient world.  Unfortunately, he’s fated not to go the full nine. *

4. Big Ajax (1B).  A classic clean-up hitter, Ajax swings a big hammer. His towering defence should prove a real asset at first base.

5. Agamemnon (RF). Despite his poor decision-making, which often leads to high strike-out totals, there is no doubting Agamemnon’s power. Off-the-field issues could prove his downfall.

6. Nestor (2B). A wily old veteran, Nestor brings a huge amount of experience to the team. This guy has seemingly played for every one (including the legendary Argonauts travelling team).  While he no longer swings the lumber like he used to, he’s still a solid player on both sides of the ball.

7. Menelaus (LF). While lacking the pure power of his bother, Agamemnon, Menelaus is no slouch in a one-on-one match-up. However, his marriage could prove a distraction.

8. Odysseus (C). Although considering retirement, Odysseus can still play the game. With his cunning and tactical awareness, he’s the perfect guy to be calling the pitches. He seems to have a knack for knowing exactly when to call for a curve-ball or change-up.

9. Antilochus (SS).  The son of Nestor, Antilochus combines good speed with great hands.  Just the sort of guy you want out at short.  Still young, his swing should develop in time.

Patroclus (P). When Achilles leaves the game, there really is only one guy who can ‘don the armor’. Although lacking Achilles god-given talents, he’s a man the Greeks will follow.

* In fact, Achilles career will be tragically cut short after failed Tommy John’s surgery.
Posted by joe5mc at 02:54