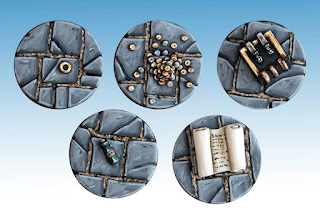 Officially, it is still about three weeks until the release of Frostgrave: Fantasy Wargames in the Frozen City, but I suspect people are going to get their hands on it much sooner than that. I know the Nickstarter is hoping to start shipping the week after next, and undoubtedly copies will start getting out to people early – they always do.


This is great; I know a lot of people are really looking forward to getting the game, reading the rules, and giving it a try. The response to the Nickstarter has been overwhelming. It’s nearly hit £38,000 worth of pre-sales. The discussion about Frostgrave on the Lead Adventure forum has carried on for nearly 700 posts, while the Dakka Dakka forum has another 300. There are over 200 members of the Frostgrave Facebook group!


However, what for everyone else is anticipation is for me trepidation. While the early reviews for the game have been positive, it is going to be the wargaming public that gets the final verdict. Will people want to pick up their dice and play the game? I suppose I will know soon...

In the end, I wrote Frostgrave because it is the kind of wargame that I wanted to play, a game with a narrow focus (like the exploration of a lost city), but with huge variety. I wanted a wargame that was similar to the role-playing games of my youth, where I could construct my character, my wizard, just the way I wanted him. I wanted a game with lots of different spells and lots of different magic items. I wanted lots of monsters. Even if they weren’t necessarily integral to the game, I wanted to be able to use all of those miniatures I had bought and painted just because they were cool. I wanted a game that encouraged me to tell stories, that felt like my miniatures were ‘adventuring’ instead of just lining up for battle. I wanted a game where I could play a heroic wizard supported by shining knights, or an evil necromancer and his band of grave-robbers, or anything in-between.

This style of more ‘open-ended’ miniatures gaming might not be to everyone’s taste, but it is certainly to mine. I just hope, that when the game is judged, it will be judged in the spirit it was written.

Now, back to writing that supplement – hydras, Frostgrave definitely needs hydras...
Posted by joe5mc at 03:44