Frostgrave - The Hunt for the Golem 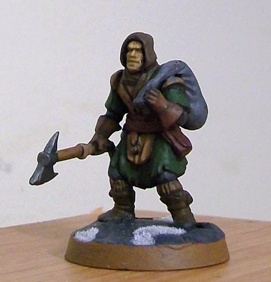 It wasn't my original intention to become directly involved with the Frostgrave Nickstarter campaign, but there has been so much excitement, and so many people are supporting the game already, that I guess I just got caught up in all the fun. I told Osprey and Northstar that if the Nickstarter hit £30,000, then I would contribute a new mini-campaign that I had been working on as one of the spend-goal giveaways.

Well, for those keeping score, the Nickstarter passed £30k sometime this weekend! So, it looks like most of the backers will be receiving Frostgrave: The Hunt for the Golem as a free PDF. The campaign consists of three linked scenarios involving a rogue construct from the earliest days of Frostgrave's history. Along with the scenarios, some fluff, and the new monster, there are also a few new treasures that can be discovered during the campaign that will be especially interesting to wizards who like to make their own constructs.

I finished writing the campaign over the weekend. I just need to do some editing before I send it off to Osprey. 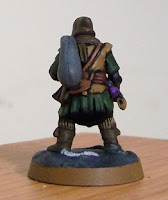 In other Frostgrave news, I painted up my first official plastic Frostgrave soldier. I went with a basic thug, because you are always going to need a few. I gave him the axe, because it looks tough, and then I gave him a swag bag. Well, that's what I'm calling it anyway. It's my favourite piece on the sprue, just a sack that can be thrown over the shoulder. Not only does this give something for the thug to carry in his off-hand, thus explaining why he only carries an hand weapon, but fits well with how I usually use my thugs during the game. Their job is basically to grab the loot and get out of there, while my better soldiers and spellcasters do the real fighting.

Anyway, I just want to thank everyone who has supported the game so far, and I hope they enjoy the new mini-campaign!