Merry and the One Ring

Of the four principle hobbits in The Lord of the Rings, two carry the One Ring - Frodo, who carries it all the way to Mount Doom, and Sam who takes it off Frodo when he thinks he has been killed and who returns it when he realizes his mistake. The other two hobbits are never directly tempted by the ring. I think, however, it is safe to assume that Pippin could not have handled it. He couldn't even resist the temptation posed by the Palantir. Which leaves just Merry. It's hard to say how Merry would have handled the One Ring, had he been forced to carry it. He was certainly brave in battle, but that is no measure of resistance to the Ring (see Boromir).

So, we are left to our own thoughts on the subject. Personally, I believe Merry could have carried the ring, and, while I think he would have found it more difficult and more tempting that either Frodo or Sam, with support, he could have made it. Feel free to disagree. 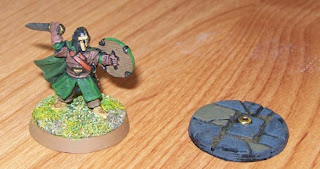 All of this is just a long-winded introduction to show off the two miniatures I have managed to paint lately. The first is Merry in his Rohan equipment as produced by Games Workshop as part of their The Lord of the Rings line. A very nice little figure and fun to paint. Strangely, as far as I know, GW never produced a figure for the One Ring itself, at least not all on a base of its own. It seems a bit of an oversight somehow. My One Ring is one of the Frostgrave treasure tokens that were originally made as giveaways during the Nickstarter, but are now generally available.

It's not a huge painting output, but it's not bad considering the time I've had lately. It is funny how even a little bit of quiet hobby time, and a little bit of progress on some miniatures really improves my general outlook.
Posted by joe5mc at 12:19